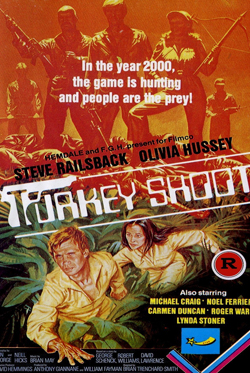 Brian Trenchard-Smith’s 1982 actioner is an exploitation riff on 1932’s The Most Dangerous Game featuring a cast made in mondo heaven including Steve Railsback, Olivia Hussey and Michael Craig (Harryhausen’s Mysterious Island). Brian’s claims for the film as a satire can be borne out by its British release title, Blood Camp Thatcher, a back-handed salute to the steely Prime Minister.