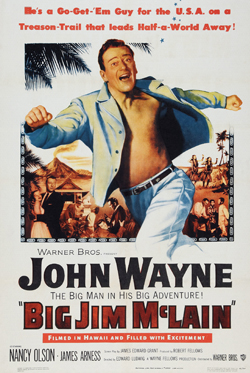 John Wayne wades into fraught political waters as Jim McLain, an investigator for the House Un-American Activities Committee who finds work busting a hotbed of communists in sun-kissed Honolulu circa 1952. Jim Arness, Wayne’s friend and future Gunsmoke star, is along for the ride. When the movie opened in Europe it was re-titled Marijuana and its drug-dealing subplot took center stage while dubbed dialog played down the red-baiting aspects.