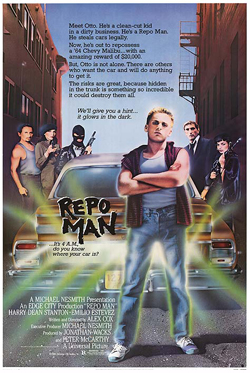 Director Alex Cox’s grungy sci-fi comedy has something for everybody; possessed life forms, shaggy dog humor, Harry Dean Stanton and one of the greatest punk rock soundtracks in the history of movies. Iggy Pop’s theme song kicks off the quirky plot about a layabout (Emilio Estevez) who finds his calling repossessing cars and ends up communing with the cosmos. Co-starring Sy Richardson in a seriously hilarious performance as a street wise repo man.