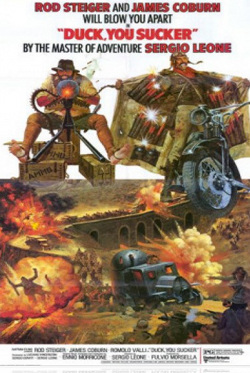 Considered one of his most overtly political films, this final Sergio Leone western is a melancholy action film steeped in memory. It looks to have influenced Leone collaborator Bernardo Bertolucci’s own politically charged historical epic, 1900. Peter Bogdanovich was originally contracted to direct but ankled when he bridled at having to imitate Leone’s baroque pictorial style. James Coburn’s Irish revolutionary role was intended for Jason Robards and Rod Steiger’s Mexican peasant for Eli Wallach. When a shortened version was released in America to boxoffice indifference in 1971 the title was changed to A FISTFUL OF DYNAMITE. Also known in Europe as ONCE UPON A TIME…THE REVOLUTION. It was banned in Mexico until 1979.