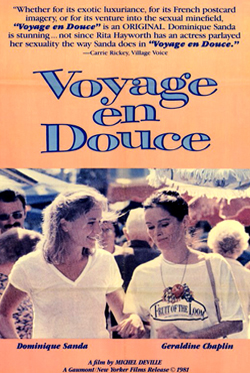 Two frenchwomen, played by Dominique Sanda and Geraldine Chaplin, go for a weekend outing and share stories about their past sexual escapades. The 1980 film, directed by Michel Deville, is most notable for its episodic flashback structure, derived from 15 different anecdotes by 15 different writers. With films like Le Lectrice (starring Miou-Miou), Deville found great critical and box-office success in his homeland but he was never to achieve the international notoriety of contemporaries like Godard or Truffaut.