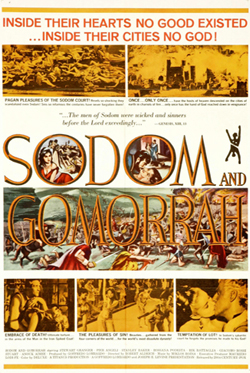 Last Days of Sodom and Gomorrah

Sergio Leone was an (uncredited) second unit director on this epic potboiler directed by Robert Aldrich whose own appetite for lurid scenarios is on full display (it was released the same year as WHATEVER HAPPENED TO BABY JANE). This was the last of the great Miklos Rozsa’s truly magisterial scores (he replaced Dimitri Tiomkin and considered the resulting film “tacky”). The production design was by Ken Adam (who was working on DR. NO the same year). Currently unavailable in DVD in the US. For an even more in-depth look at the movie, check out Glenn Erickson’s DVD Savant article here.