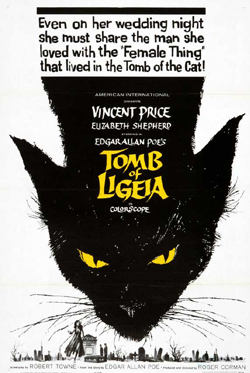 The Tomb of Ligeia

Roger Corman bids farewell to his Edgar Allan Poe series with a beautifully mounted departure from the heavy stylization of previous entries, played more like a gothic romance. Vincent Price would go on to topline an eccentric collection of further Poe “adaptations”, some of them in name only.  Elizabeth Shepherd is a strong proto-Jane Austen heroine, and also plays Price’s dead wife who haunts him from the grave in the form of a black cat. It’s an intelligent and satisfying climax to the Corman/Poe saga.