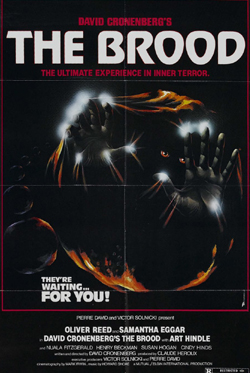 This one states the theme for much of Cronenberg’s output in the eighties: what’s bred in the bone will out in the flesh (and there’s nothing we can do about it). Psychotherapist Oliver Reed enables his patients to physically mutate in response to their own repressed rage. Samantha Eggar is the unlucky mom who spawns the titular monsters: dwarf-like creatures who do the murderous bidding of mom’s subconscious impulses (akin to Professor Morbius’ Id Monster in Forbidden Planet). Apparently inspired by his then-recent divorce and child custody battle, Cronenberg reportedly considers this study of marital rage to be his Kramer vs. Kramer.