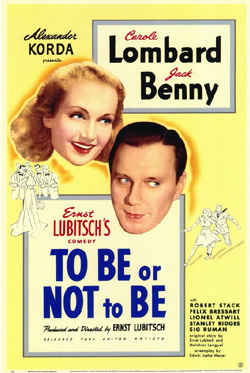 To Be or Not to Be

Jack Benny’s greatest movie role, and no wonder–it was written especially for him by Ernst Lubitsch! Carole Lombard’s swan song earned her some of her finest reviews posthumously, but the film itself, daringly dark for the time, was generally regarded as an insensitive and even troubling satire of wartime issues. The title refers not only to Shakespeare but the questionable existence of Poland. It has since been recognized as one of the director’s finest efforts and a brilliantly cast comedy classic. Remade in 1983 with Mel Brooks and Anne Bancroft in the leads.