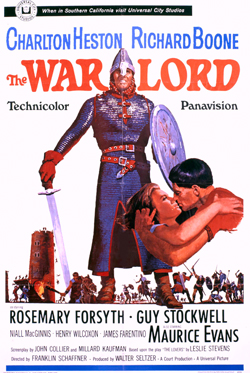 Irony of ironies, Franklin Schaffner’s 1965 epic, The War Lord, was based on a play called The Lovers. Stalwart Charlton Heston plays a medieval knight tasked with defending a Druid village where he promptly falls in love with local lass Rosemary Forsyth. Richard Boone co-stars along with Maurice Evans who would reunite with Schaffner and Heston under far different circumstances in 1968’s Planet of the Apes.