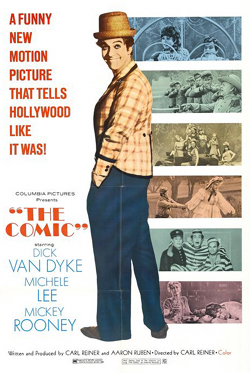 Comedy buffs Carl Reiner and Dick Van Dyke re-teamed for this tribute to silent comedy centering on an egotistical star named Billy Bright.  The  plot juggles  episodes culled from the careers of  Langdon, Chaplin and Van Dyke’s friend Stan Laurel, but it actually hews closer to the life of Keaton than The Buster Keaton Story did!  Some last-minute studio cutting didn’t help, and it failed at the box office.   Mickey Rooney shines as a Ben Turpin-like sidekick with non-PC eyeball issues. And here’s Dick Van Dyke himself on The Comic