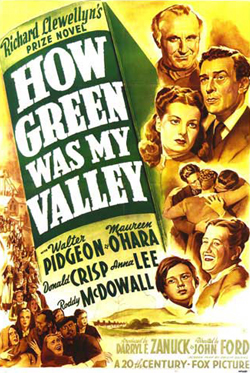 How Green Was My Valley

John Ford replaced William Wyler as director of this multi-Oscar nominated‚ saga about a turn of the century Welsh coal mining family‚ which walked home with five awards and beat out The Maltese Falcon, Sergeant York, Suspicion, and Citizen Kane for Best Picture. Nathan Juran’s reconstruction of a Welsh mining town built in the Malibu hills still stands as one of the greatest set constructions in film history. This chopped-up reissue trailer doesn’t do the film justice.