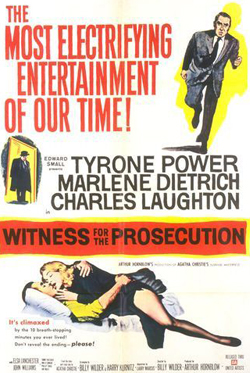 Witness for the Prosecution

Billy Wilder’s trademark sardonicism lends welcome bite and wit to this twisting, turning murder mystery from Agatha Christie. As the man accused of killing a rich widow Tyrone Power is a ball of lethargy. Fortunately Wilder focuses on the terrific Charles Laughton as the barrister hired to defend Power and Elsa Lanchester (Laughton’s real-life wife) as the portly lawyer’s mindful nurse. The movie benefits from a great supporting cast including Marlene Dietrich, John Williams, Henry Daniell and Torin Thatcher. Laughton and Lanchester were both nominated for Academy Awards.