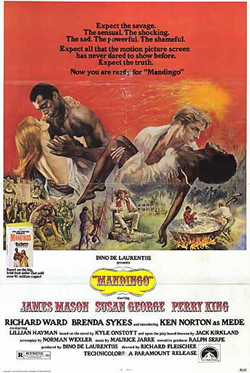 In recent years Richard Fleischer’s critically derided adaptation of‚ Kye Onstott’s ‚ steamy novel has been revalued as a progressive portrait of a racist era, but Josh Olson begs to differ. Even in its day this anti-Gone With the Wind‚ effusion was considered beyond the pale, but it was successful enough on the exploitation circuit to inspire an equally lurid‚ sequel, Drum. James Mason deals with it like a trouper.