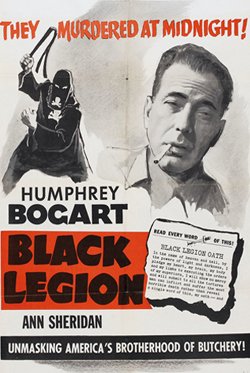 One of the more provocative entries in Warner Bros.’ line of socially conscious potboilers, Black Legion is based on the real events surrounding a murderous splinter group of the Ku Klux Klan that, though numbering only around 30,000 members, still managed to rattle the nerves of a large portion of the populace in the late thirties. Humphrey Bogart stars as the ill-fated pawn of the black-hooded vigilantes and he’s supported by Warner Bros.’ favorite gum-cracking girlfriend, Ann Sheridan, along with future Universal contractor Dick Foran as his best friend. Directed by Archie Mayo with some uncredited help from Michael Curtiz.