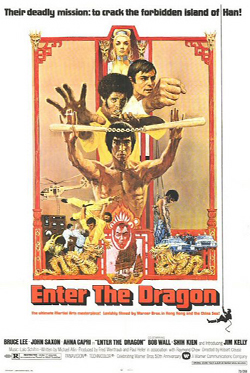 A huge international hit, this first Chinese martial arts movie produced by a major Hollywood studio was released a month or so after the demise of charismatic star Bruce Lee and became, more so than any of his previous Hong Kong films, the one that made him a mainstream legend. Its success led to an unending series of Lee-less ripoffs like Fists of Bruce Lee, Exit the Dragon Enter the Tiger, The Legend of Bruce Lee, Goodbye Bruce Lee: His Last Game of Death, Enter the Panther, and our favorite, Bruce Lee Fights Back from the Grave.