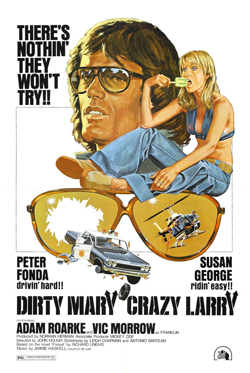 Director John Hough made this eccentrically plotted action flick at the height of the American moviegoer’s passion for rowdy car chase movies. A Nascar take on Bonnie and Clyde, Peter Fonda stars as a hot-rodder who knocks over a supermarket in order to fund his racing team. Susan George plays the good-time girl who goes along for the ride and Vic Morrow co-stars as the single-minded sheriff in hot pursuit. The film was a solid success bringing in over 12 million dollars in 1974 (most likely collected from drive-in venues).