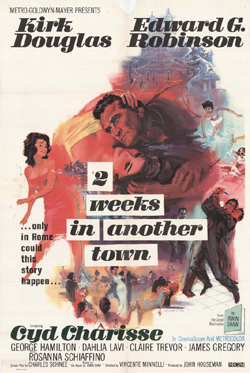 Two Weeks in Another Town

Director Vincente Minnelli and star Kirk Douglas reunited‚ for this operatic non-sequel followup to their‚ caustic 1952 Hollywood saga The Bad and the Beautiful, now set ten years later in the La Dolce Vita movie world of Rome and based on a novel by Irwin Shaw. Some claim its protagonists are thinly veiled representations of Tyrone Power, Linda Christian and Darryl Zanuck. Extensively recut by the studio, it’s still a delirious fantasy about Eternal City filmmaking with some memorable sequences and a terrific cast.