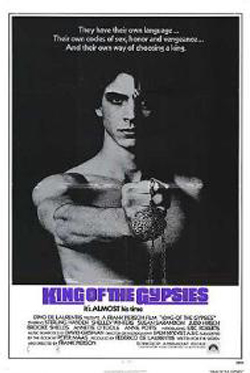 King of the Gypsies

A modern-day folk tale about the criminal ways of a close-knit gypsy clan, Frank Pierson’s 1978 film boasts a stellar cast including Eric Roberts as a Michael Corleone-like character who reluctantly takes the reins of the family “business” from his grandfather played by Sterling Haydn. Co-starring Shelly Winters and Susan Sarandon, the film was shot by Bergman’s favorite cinematographer Sven Nykvist.