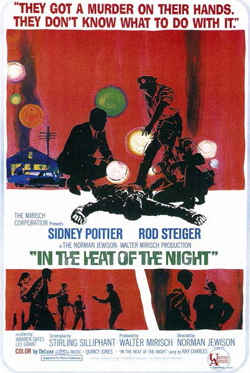 In the Heat of the Night

Released 1967
Distributor United Artists
Sidney Poitier and Rod Steiger star in this incendiary drama about a black detective tasked with solving a murder in the still-segregated Mississippi of 1967 – times being what they are, Norman Jewison’s film continues to pack a punch. And speaking of punches, Poitier’s then-shocking retaliation against a supercilious old bigot upended movie theaters both north and south of the Mason-Dixon Line.
Buy the movie at: