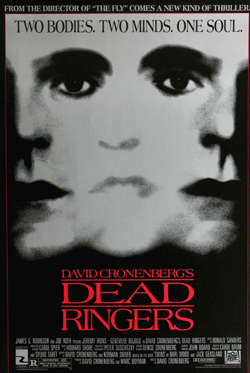 David Cronenberg’s dark-souled psychological horror film casts Jeremy Irons as Elliot and Beverly Mantle, identical twin gynecologists who make a habit of seducing their patients. Unbeknownst to these women, the twins assume each other’s identity in the bedroom as well. The sibling’s sadistic roleplaying, exacerbated by drugs and paranoia, sends their lives (and the movie) into a hellish spiral replete with typically grotesque Cronenbergian touches. Irons won the New York Film Critics award for Best Actor.