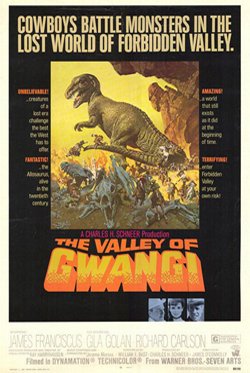 The Valley of Gwangi

Ray Harryhausen makes good on a concept conceived decades earlier by his mentor Willis O’Brien, the genius behind Kong. Echoes of Mighty Joe Young hover over this shot-in-Spain cowboys vs. dinosaurs extravaganza which, despite a spirited ad campaign, failed to catch on at the boxoffice. Stirring music score by Jerome Maross.