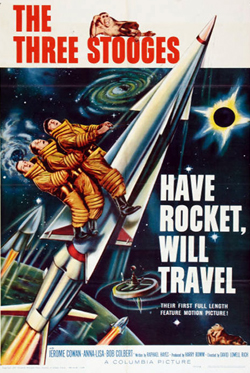 Have Rocket Will Travel

This cheap but popular sci-fi spoof was the first Columbia feature for the Stooges, who had contemplated retirement until the galvanic response to the release of the Stooges shorts on nationwide TV in 1958 brought them back into the limelight. The boys accidentally travel to Venus and encounter a giant fire-belching spider and a talkative unicorn. Moe retired the eye-poking after this one, averting a blindness epidemic on the playground. This was the first Stooge appearance by Curly Joe DeRita (replacing Joe Besser, who replaced Shemp, who replaced Curly) as the third Stooge.