Wow! Fritz Lang’s second western is a marvel — a combo of matinee innocence and that old Germanic edict that character equals fate. It has a master’s sense of color and design. Robert Young is an odd fit but Randolph Scott is nothing less than terrific. You’d think Lang was born on the Pecos. 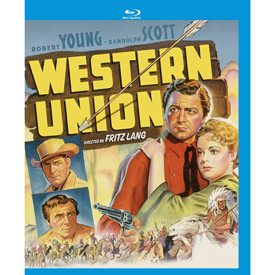 Darryl Zanuck of 20th Fox treated most writers well, was good for John Ford and apparently also good for expatriate director Fritz Lang. The UfA legend didn’t initially prosper in Hollywood’s, as he found his style incompatible with a filmmaking factory system where the director was not the ultimate authority. Lang made great pictures but did not endear himself to studio brass, most actors and almost all crews. Bouncing from MGM to independent Walter Wanger to Paramount, Lang finally landed at Fox, where Zanuck assigned him the Technicolor sequel to Henry King’s hit film Jesse James. The two must have seen eye-to-eye, for the movie allowed Lang to indulge his love of the American West, which was enormously popular in Germany. 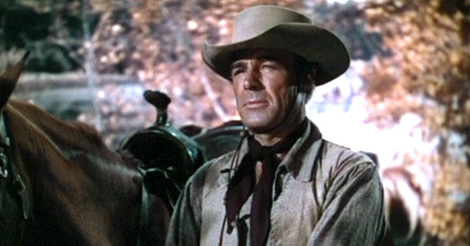 The Technicolor follow-up Western Union shows Lang working in harmony at last. Maybe the actors didn’t exactly like him, but his finished film is a dazzler — an unpretentious western that combines a naïve enthusiasm with Lang’s keen sense of character conflict. The source story from Zane Grey adds a touch of class to a standard yarn about civilization pushing West, this time with the stringing of the first telegraph wires. Always concerned with the element of design in storytelling, Lang pumps his show full of bright colors. He also doesn’t neglect his cast. The mostly stock characters are presented in such a good spirit that we feel like kids at the matinee again.

A Zane Grey story is often about the power of redemption, but Lang’s western puts a high price on atonement. Thief Vance Shaw (Randolph Scott) rescues telegraph surveyor Edward Creighton (Dean Jagger) in the desert, not realizing that Creighton is managing the entire Western Union telegraph project that is currently stringing wire on poles all the way to San Francisco. When Shaw takes a job as a troubleshooter, Creighton keeps quiet and gives the outlaw a second chance. Both Shaw and green Easterner Richard Blake (Robert Young) become enamored of Creighton’s sister Sue (Virginia Gilmore of Orchestra Wives) and a chivalric, good spirited rivalry ensues. Vance Shaw’s turn to the good side of the law comes to an abrupt finish when his old gang shows up. Led by Shaw’s old crony Jack Slade (Baron McLane) the gang is stealing Western Union’s horses and supplies, and selling them right back to the company. Creighton turns a blind eye to the first crimes, hoping that Shaw isn’t involved. But Slade’s men dress as Indians to stir up trouble with the local tribes – which results in greenhorn Blake foolishly shooting an Indian and risking a massacre. As it turns out, Vance Shaw has a personal reason not to turn against Jack Slade … until a conflict can no longer be avoided. 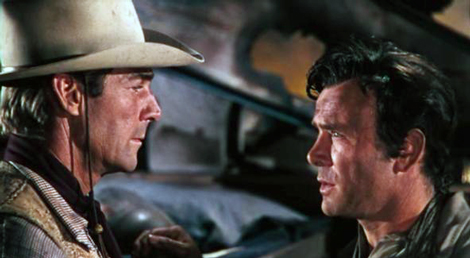 Lang was allowed to fully prepare his self-described ‘stylization of American folk-lore’, and it shows. He personally scouted the film’s excellent locations and reportedly tinkered with the screenplay. Lang presents the telegraph as a positive innovation, and the job of his heroes is to protect it from bandits and convince the Indians that it will do them no harm. As he would do in many of his American films, Lang fully shows the work process — long tree-poles hauled by wagon, and large augers used to dig the post-holes. We also see the wire being spliced: you didn’t think that a single length of wire stretched between St. Louis and San Francisco, did you? The telegraph operators do more than click their clicker keys. We even get coded telegraph jokes, when Sue and her operators rap on the desk to comment on dandy Richard Blake’s silly Eastern-tailored western clothing.

It’s Lang’s second color film, and it’s much better designed than his first, The Return of Frank James. Every hue pops, but nothing is inexcusably exaggerated. Lang allows the cast to get dirty when needed. His exterior panoramas pull color out of the painted rocks, and show light shimmering off the wet grass at night. Yes, everybody has that Max Factor Technicolor #8 look, but they don’t come off as mannequins. Randolph Scott’s unshaved face is more than convincing. 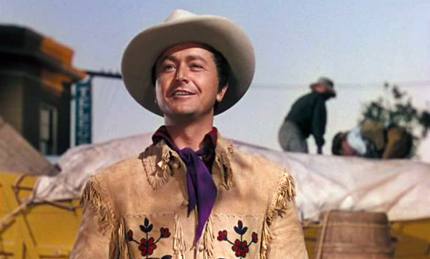 I’m not a fan of first-billed Robert Young, but he’s fine as the upright and intelligent Easterner who makes mistakes and is not condemned for them. Randolph Scott is the real hero, and the one who brings tension to the tale. Vance Slade longs for the trust of good men like Edward Creighton and suffers without complaint when events force him to betray the company. For Fritz Lang conflict always leads to tragedy, and here it’s the classic good-bad hero who takes the blame. For we seasoned western fans that expect Randolph Scott to take the noble path, the final fade out is something of a trauma in itself. Expect surprises.

Lang’s exciting action scenes use swift pans and surprising reveals. Instead of fancy gunplay he goes for the realism of showing bullet hits in glass and wood. A tilt-up reveals a likeable character dead and hanging where he was working on a pole. Another great moment examines some unfinished wire-stringing work on the ground, and then a menacing Indian lance next to it. Then the camera to the left to reveal at least two hundred mounted Indians, ready and waiting to attack in full regalia.

Unlike Ford or De Mille, Lang’s film doesn’t claim that driving the golden spike for a railroad is a God-sanctioned achievement of Manifest Destiny. Edward Creighton’s telegraph means progress, pure and simple — instantaneous communication between the coasts was surely as big a leap forward as The Internet. The integrity of Creighton and the approving smiles of his sister Sue add enthusiasm to the venture, and we don’t worry about the fact that it’s the work of a private company being built during the War Between the States. Lang keeps it all on the personal level — unlike Ford, these westerners aren’t acutely aware that they’re making history. Nobody poses for posterity. 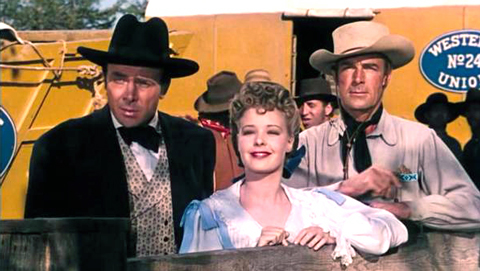 [ Sidebar: Audiences in 1941 may have thought this show rather similar to De Mille’s railroad epic Union Pacific. This causes me to imagine an ‘It’s a Mad Mad World’ comedy western called “Western Union Pacific.” A railroad company and a telegraph company on the way through the wilderness clash over easement rights, water rights and the general spoils of graft that came with such big enterprises, and end up in a shooting war. The Indians and the bandits do what they can to calm things down, to no avail. The joke is that nobody wants to build the West – unless they can own it outright.]

Like most pre-war Fox westerns the cast is packed with scores of well-cast supporting actors with meaty speaking parts: John Carradine, Chill Wills, Russell Hicks, Victor Killian. Slim Summerville (All Quiet on the Western Front) is particularly good as a cook nervous about being scalped by Indians. Although the Indians are still typed as childish savages, they have a fine spokesman in Chief John Big Tree, a favorite from John Ford’s Drums Along the Mohawk and She Wore a Yellow Ribbon.

We’re told that Lang got out of his Fox contract two years later to work independently. Perhaps Lang and Zanuck had a falling out, because Archie Mayo replaced him on his last two assignments: Confirm or Deny and Moontide. Lang’s next picture would be an independent produced by Arnold Pressburger, the superb wartime thriller Hangmen Also Die! From here on Lang’s career would be hit and miss — with some of his greatest pictures alternating with others flawed by weak productions or indifferent studio support. He came back to Fox once again, for American Guerilla in the Philippines. 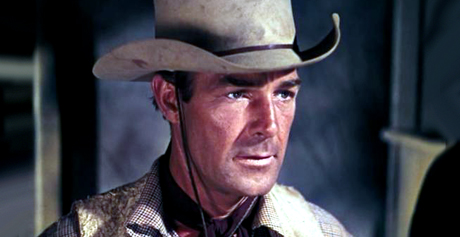 The KL Studio Classics Blu-ray of Western Union is a nicely restored Technicolor picture from relatively early in the 3-Strip process — the source composite negative is in good condition, with colors that often leap off the screen. Some scenes approximate the original IB Tech sheen, with both bright primary colors and subtle tones in the splendid outdoor scenery. The audio is also in perfect shape. The only slight drawback is the overly emphatic music score, which mechanically switches back and forth between the grating main theme and different motifs for the Indians, any activity with wagons, etc.. Not a big problem, but it is a weakness.

For extras, Kino gives us trailers for Canadian Pacific, The Caribou Trail, Man of the West, Yellow Sky, The Gunfight at Dodge City and Man with the Gun. With Western Union I’ve finally seen all of Lang’s directing filmography, save for one or two of his earliest silent pictures. And I’ve reviewed most of them as well. Once one digs into Lang’s pictures, one wants to see them all:

The Spiders*,  Destiny*,  Dr. Mabuse the Gambler*,  Die Nibelungen*,  Metropolis*,  Spies*,  Woman in the Moon*,  “M”*,  The Testament of Dr. Mabuse,  Liliom,  Fury,  You Only Live Once,  You and Me,   The Return of Frank James,   Western Union*,  Man Hunt*,  Hangmen Also Die!*,  Ministry of Fear*,  The Woman in the Window,  Scarlet Street*,  Cloak and Dagger*,  Secret Beyond the Door…*,   House by the River,  American Guerilla in the Philippines,  Rancho Notorious,  Clash by Night,   The Blue Gardenia,  The Big Heat*,  Human Desire,  Moonfleet,  While the City Sleeps,  Beyond a Reasonable Doubt,  The Tiger of Eschnapur and The Indian Tomb,  The 1,000 Eyes of Dr. Mabuse