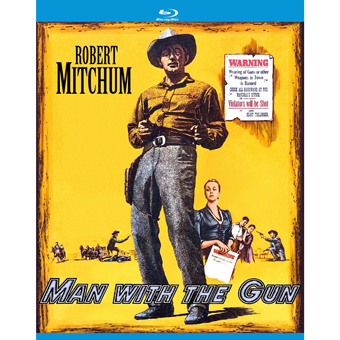 Set loose from his home studio of RKO, the unpredictable Robert Mitchum became the bad boy of ’50s Hollywood. Among other cute tricks, he turned up at Cannes in racy photos with a topless starlet. To sample the naughtiness, just Google ‘Robert Mitchum Cannes topless images.’ But our favorite delinquent was also honing a terrific independent acting career, making sure to take on challenging roles, like that of the mad preacher Harry Powell in Charles Laughton’s Night of the Hunter. Made almost at the same time, the western Man with the Gun would at first seem an ordinary lower-case project. But its director and co-writer Richard Wilson, a former associate of Orson Welles, was beginning a reputation as a quality filmmaker. 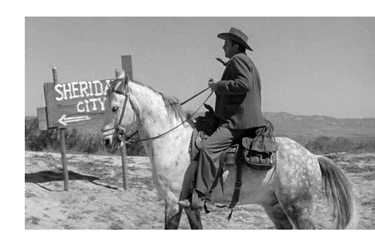 Man with the Gun was a ‘first’ for about everybody but Robert Mitchum, who had learned how to act, or at least how to best present himself on camera, in a series of Hopalong Cassidy westerns in the early 1940s. It was Samuel Goldwyn Jr.’s first solo producing credit, and Richard Wilson’s first job of directing. His script has a darker edge than many. Basically a standard ‘town tamer’ tale, Wilson and writer N.B. Stone (Ride the High Country) give Mitchum a healthy character to play.

The story makes the town of Sheridan City a little piece of America, a place with potential but a lot of problems. Gunfighter for hire Clint Tollinger (Mitchum) arrives in search of his wife Nelly Bain (Jan Sterling), who left him over his choice of profession, and sent their daughter back East to live. While getting the cold shoulder from Nelly, Clint observes that the town is under the thumb of a crooked rancher, Dade Holman (Joe Barry). Holman’s gunmen terrorize the citizenry, ‘discouraging’ at gunpoint homesteaders like young Jeff Castle (John Lupton). The acting town Marshall Sims (Henry Hull) refuses to do anything. After Jeff is wounded and his half-constructed house burned down, town council head Saul Atkins (Emile Meyer) talks his fellow businessmen into paying Clint $500 to clean up Sheridan City. He takes the job with the proviso that he’ll only do it his way. Much to the dismay of Jeff’s fiancée Stella Atkins (Karen Sharpe), Clint immediately takes the battle to Holman, blasting down two gunmen and then blowing away two more that come into town to take him on. 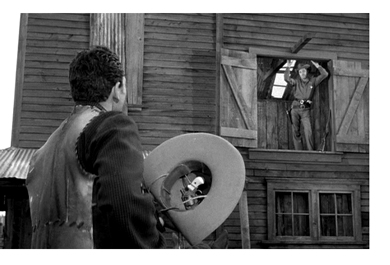 Man with the Gun isn’t quite as extreme a town-taming movie as Edward Dmytryk’s Warlock, which carries the equation further by having its hired gunman all but shoot the people that hired him as well. As they deal with the issue of law and order, both movies are a response to the earlier award-winner High Noon. People want peace and quiet, but cops won’t risk their necks for just a few dollars a month. But a town that hires a tamer with a reputation are making a deal with the devil… besides the bloodletting he brings, who’s to say where he’ll stop? The tamer is an extra-legal vigilante invention. He’ll do the dirty work, and sooner than later be scapegoated by the people who hired him, who don’t want to think of themselves as killers.

Mitchum’s Clint all but erases the moral problem. He’s more than adequate to the task — he practically murders two guys, and is fast enough to wipe out a killer (Claude Akins!) with a trick pistol in his hat. Clint is not getting along well with his estranged wife, who refuses to see him or discuss their daughter. He makes a big impression on young Stella, who disapproves of his job but is also attracted to him. When Jeff refuses to back off, Clint can’t protect the young man from Holman’s treachery. Most interestingly, Clint isn’t infallible, and proves to be susceptible to emotion as anybody. He’s been putting pressure on Frenchy Lescaux (Ted de Corsia), who runs Holman’s saloon, a fancy place with a large chandelier. When Clint receives some bad personal news, he immediately takes it out on Lescaux. Clint Tollinger is fighting on the right side, but he’s still an unpredictable hired thug. 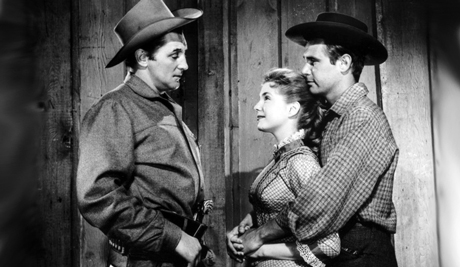 His first time out directing, Richard Wilson uses interesting angles and keep scenes energized with tracking shots. He also ties interiors and exteriors together when he can. Wilson certainly isn’t imitating Orson Welles, but it’s a good job of direction. He starts off well, establishing a major villain by having the lout shoot a boy’s dog just for barking at him. The scene is so matter-of-fact that we don’t laugh. Yep, this is one bad guy, all right.

Robert Mitchum puts unexpected depth into his gunslinger, a ‘pro’ who acts cool until his family is involved. Clint has a dark backstory of death and injustice on his mind. Nobody else seems to know that Clint and Nelly are married. Clint tries to inspire Stella to stick with her man, but he does accept a kiss from her at one point. It’s still basically a conservative story — Clint is no hipster, and secretly wants to put down his gun. Fans of Night of the Hunter will be amused by a ‘Strawberry Social’ gathering where Clint must listen to an old biddy (perennial biddy Maudie Prickett) push a tomato pie at him. He doesn’t reach into his pocket for a switchblade. 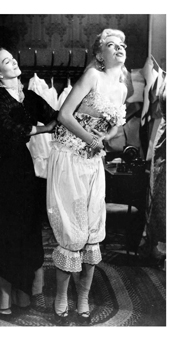 Jan Sterling is always good, but has a difficult role to play. Her Nelly Bain runs a boarding house for showgirls. There’s no funny business going on whatsoever — no men are allowed inside at all. They might as well be Harvey Girls, but wearing fancy underwear. The five girls that perform at Lescaux’s saloon all look good enough for the stage in New York or Paris. They include Kitty, played by dreamy young Angie Dickinson, she of the endless legs. Mouthy, pea-brained Ann Wakefield is played by favorite Barbara Lawrence, the annoying Gertie from Oklahoma!). The foolish Ann ends up being used as bait to trap Clint, while Nelly, having had a change of heart, rushes around desperately trying to save her man. All three women figure in the climax, which makes them more than decoration.

Karen Sharpe has the best female role. Under the influence of the girl-bait Clint, her Stella wavers only slightly in her commitment to her rather stiff boyfriend Jeff, but the tension is nicely expressed in looks and gestures. Ms. Sharpe would later become the longtime Mrs. Stanley Kramer. As Mitchum was starring in Kramer’s Not as a Stranger around this time we wonder who knew whom, and when. Sharpe had proved herself a trouper, even playing the second lead in Bomba the Jungle Girl; she got more attention in the previous year’s The High and the Mighty as an airplane passenger who spends much of an in-flight emergency passionately making out with her husband. 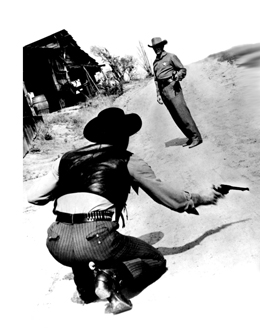 Elsewhere director Wilson floats a balanced ensemble. Emile Meyer is the most reasonable townsperson, while unbilled Jay Adler, Burt Mustin, Stafford Repp and Robert Osterloh are other citizens. Maidie Norman has some nice moments as a respected employee, not a servant. With such a large speaking cast, this is a much busier picture than the usual B&W program oater.

Mitchum has some worthy opponents as well. I mentioned colorful Claude Akins as Holman’s #2 gunman. Just two years in the business, Akins was already well established. Just as memorable yet never a big name is Leo Gordon as Holman’s #1 bad guy, the kind of creep who would shoot a dog. Gordon had served time for armed robbery before turning to acting. He also wrote quite a bit, including several scripts for Roger Corman. Gordon becomes more interesting with the knowledge that he was happily married for fifty years to actress Lynn Cartwright. We’ve all seen her; she’s best known for her last role, playing Geena Davis aged 65 in the near-classic A League of Their Own.

Man with the Gun was made at a time when most every Hollywood actor tried a western or two. It might not be a career highlight for Robert Mitchum, but it’s also not one of those movies that he walks through with a bored look on his face (think Foreign Intrigue). Mitchum fans will find it well worth their while.

The KL Studio Classics Blu-ray of Man with the Gun is a very clean HD transfer, matted to a correct 1:85 aspect ratio that gives balance to the handsome B&W images of cameraman Lee Garmes. I frankly don’t understand why other reviewing outlets, some more technically-oriented than Savant, express uncertainty with the aspect ratios of post-1953 Hollywood movies. Are they bombarded by threats from the flat-screen Luddites? This is an obvious wide-screen feature.

A well-filmed nighttime fire scene is another indication that this is a higher-tier production than many other B&W UA releases of the time. Had the show been filmed in color, it would doubtless be much better known now. Kino Lorber’s extras are a trailer for this show and two other westerns.