Fritz Lang applies rigorous realism and excellent science in the first half of his final silent film, a treat for fantasy fans and those impressed by a NASA-like moon rocket forty years before the reality. The action on the moon is pure green-cheese fantasy, with breathable air, deposits of gold and evidence of a human civilization. Let’s go! 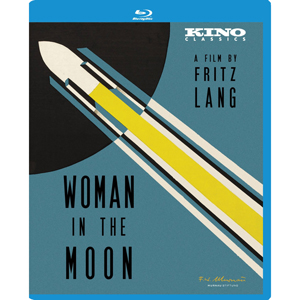 Fritz Lang’s last silent film pre-dates Hollywood’s outer-space science fiction subgenre by over twenty years. Lang’s scenarists included scientific experts later associated with the real American space effort, and in this film they invent most of the space flight situations that would later become stock: the reverse countdown to launch, weightlessness humor, and technical troubles that translate to tough decisions on who will survive and who will not. All of that takes up about forty minutes of screen time, and the rest of Woman in the Moon is a drawn-out melodramatic tale of intrigue. 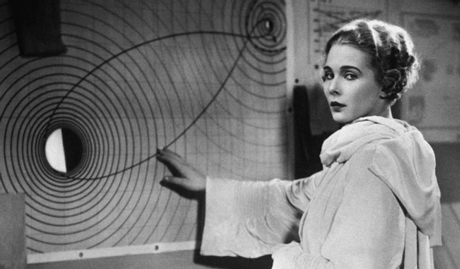 Presented for the first time in a recently restored version, Frau im Mond is an impressive technical achievement but a slow-going drama.

Spaceship designer Wolf Helius (Willy Fritsch) is almost ready to launch his moon rocket, when he discovers that his plans and a confidential document from Professor Georg Manfeldt (Klaus Pohl) have been stolen by criminals unknown. American con artist and master of disguises Walt Turner (Fritz Rasp) then shows up to announce a unique extortion plot: Wolf and his partner, engineer Hans Windegger (Gustav von Wangenheim) must allow an unnamed consortium of five scientists and financiers to take over their planned moon mission, or the colossal rocket will be sabotaged. Willy relents, and the moon shot goes forward with Turner an unwanted fifth passenger. It’s soon discovered that paperboy Gustav (Gustl Gstettenbaur) has stowed away, making the passenger manifest an even six. A nervous and indecisive man on the ground, Wolf shows the makings of a hero in space. He also resists the temptation to embrace Hans’ altruistic fiancée Friede Velten (Gerda Maurus). Meanwhile, the formerly bold Hans reacts to every outer-space danger with trembling cowardice. And Professor Manfeldt goes batty in his search for gold on the moon. 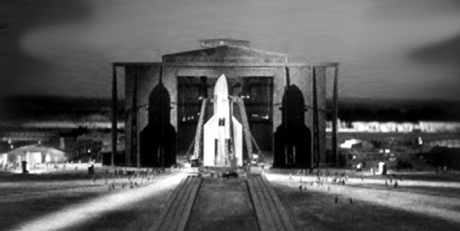 Fritz Lang must have divided this film into halves, concentrating on the science fiction aspects and abandoning the schmaltzy story written by his wife, Thea von Harbou. There’s a big disconnect between the first hour’s draggy spy story, and the belated introduction of the magnificent space rocket — Lang shows little interest in the laborious plot mechanics that establish the love triangle between hero Fritsch and his partner over the stunning blonde Gerda Maurus. With her bee-stung lips and silvery eyes, Maurus is an impressively spirited first woman in the moon. Von Harbou’s scenario presents her as an ethereal, spiritual female not unlike Maria in Metropolis, and some of her expressionistic gestures seem woefully out of place in this fairly naturalistic story. She breathes heavily and grasps her bosom to represent emotional stress, and smiles beatifically at Fritsch’s every word. At least she looks good. Looking at comparison pictures, Ms. Maurus seems an idealized version of von Harbou. 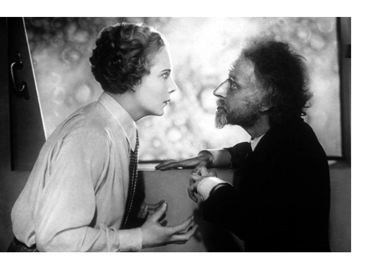 The men don’t fare as well. Hero Fritsch is an idealized, handsome Fritz Lang. Interestingly, his character Wolf is an indecisive worry wart forever fretting over problems of romance and rocketry. Buddy Hans is all smiles until the launch and then transforms into a craven fool. The nutty professor is a consistent cliché and the beaming little boy scout Gustav is along for kid appeal. The only character with whom Lang seems to have an affinity is Fritz Rasp’s bad guy Turner, whose main trait is the ability to do clever quick-changes between disguises, aided by jump-cuts. Rasp played the grim security chief Slim in Metropolis and cuts an arresting figure with his very Hitler-like hairstyle. The acting styles of all characters and must have seemed dated, even in 1929.

Von Harbou’s story dawdles for an hour setting up a situation that we’d expect Lang to knock off in ten minutes. Big questions are left unexplored. We never have a clue to where Hans and Wolf are getting the zillions of Reichmarks to build their colossal Weltraumschiff. The Al Capone-like project takeover (Turner is from Chicago) is the work of five civilized international types in a smoke filled room.

One can’t help but feel that the Hijacking of the space shot represents Lang’s attitude toward the German film industry. His ambitious Metropolis was fumbled when American companies took financial control of UfA. As interesting as the effects are in Woman in the Moon, the production isn’t a tenth as impressive as his previous gigantic futuristic fantasy.

Space fans that liked the retro-science in Disney’s Walt Disney Treasures: Tomorrowland, Disney in Space and Beyond will be fascinated by the quaint yet theoretically advanced 1929 German view of space travel. Even British and American reviews from the original release admitted that the Germans had an obvious edge in progressive technology, and much of what experts Oberth and Ley propose for the space launch never became obsolete. The giant rocket rolls out of a hanger on a gantry platform, identically to American rockets. It launches half submerged in a giant tank of water with the explanation that its structure couldn’t stand without support. That begs the question, if it can’t stand alone, how would it hold together during the stress of launch? The astronauts rest in simple cots suspended on hammock springs. For the launch, a clock runs backwards to zero while crowds of onlookers and radio reporters wait anxiously. 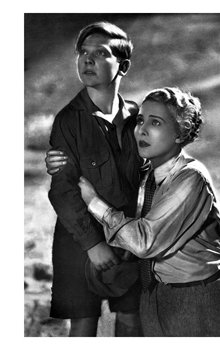 The miniatures are beautifully constructed, even if not always well filmed. Scale becomes apparent through shallow focus. Animator Oskar Fischinger used flat artwork for many of the space scenes. In the actual launch the ship zips into space far too quickly, like a skyrocket. It’s a two-stage rocket, by the way, as forseen by those German experts.

The details of the flight, the ship interior and the surface of the moon as seen from the rocket (named “Peace”) are well done. The failure of some retros results in a violent crash landing that looks as though it should kill everyone instantly. Gee, the rocket was strong enough to withstand that!

As soon as the rocket reaches the moon, all notion of scientific plausibility is abandoned. The moon has a sandy surface and no vegetation but can boast a conveniently rich, breathable atmosphere and mild temperatures. Hans complains that the ship needs serious repairs but nothing comes of that.  Despite losing most of their water and oxygen, the ship is able to take off for the return flight. Meanwhile, the professor and Turner walk through bubbling fumaroles and geysers And explore a cave studded with solid gold nuggets. Perhaps the fumaroles aren’t really hot, and are bubbling because of low air pressure?

For all the realism of the adventure, Lang’s moon might as well be made of green cheese. The professor finds a giant gold piece in the cave shaped like a human figure, and it’s not really explained. In her book on Lang Lotte Eisner said that the director originally planned for the professor to witness an ancient projection-story that explained that Atlanteans had moved to the moon millenia before, and found that they could not return to Earth. Strangely enough, this hidden back story fits in perfectly with the goofy script to Richard Cunha’s 1959 Missile to the Moon, where the first spacemen on the moon discover a civilization of women waiting for a craft to take them home. Author Eisner’s book also refers to several other ‘lost’ sequences that are now restored to this long version. 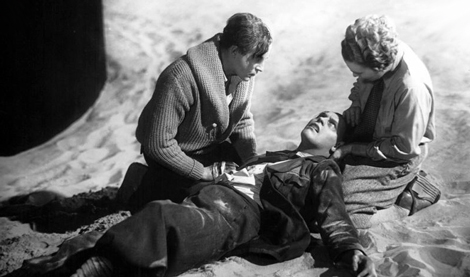 The evil American Turner starts shooting his gun for some undisclosed reason, and before we know it the cast loses a couple of members. Von Harbou then revisits that perennial dramatic chestnut in which one crewmember must be left behind to conserve oxygen — I guess they just couldn’t bottle up any of that excellent lunar atmosphere. The melodramatics separate the noble from the ignoble too choose who stays and who goes. It must be admitted that the final moments do contain yet another bizarre surprise, that the movie never fully explains.

The ‘twist’ ending works, if only by contrast with the predictablility of the rest of the story. Coward Hans loses the lottery to see who stays behind, but the self-sacrificing Wolf tricks everyone by staying behind instead. After the space ship takes off Wolf has a moment to consider his suicidal decision. Then he finds out that Friede has also elected to stay with him. They embrace. The sudden reveal of her standing imploringly by their little tent makes for a strong image — the surprise is handled well and the emotions pack a punch. But in hindsight it’s as ludicrous as the rest of the show. It’s interesting that the earliest 1950s space mellers used similar maroonings and doomed lovers to goose up their conclusions;  I’d think that Woman in the Moon was a big influence on science fiction producers like George Pal.

If you want to read a political meaning into the film’s altruistic double suicide, think of this: the fade-out places two Aryan heroes in a perfect Nazi setting. They’re kings of a dead but beautiful world, a sterile and pure place for their deliriously impossible romance. Call it a Götterdämmerung for two. 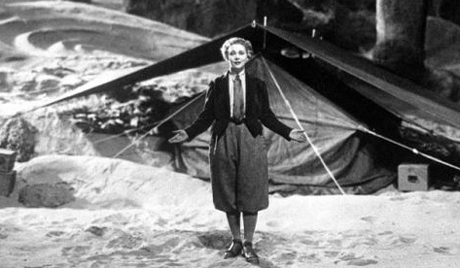 The Kino Classics Blu-ray of Woman in the Moon is a digital rendering of the same 2K restoration done in 2004. It looks a little sharper but is essentially no different.  Original German inserts of letters, cards, maps, are retained in German and translated with subtitles. At least one dramatic animated inter-title is included as well. At 169 minutes it’s a lo-ong picture. When released as Rocket to the Moon in New York in 1931 (with poorly synchronized music) it had been pared down to 95 minutes.

The old Kino DVD gave the show a music track by John Mirsalis. This new Blu-ray has a piano score by Javier Pérez de Azpetia which serves quite well. A new extra is an older Murnau-Stiftung featurette, in German with subtitles, about Fritz Lang and Thea von Harbou at this time, with some behind the scenes stills and special notes about the rocket scientists that served as advisors. Their rocket club planned a real demonstration launch for the film’s premiere, that didn’t pan out.

I once thought this next item was apocryphal, but it’s true: in 1937, when Hitler began his special rocket superweapon program, all prints, designs and models for Die frau im mond were confiscated and locked away for national security purposes.

Perhaps Hitler & Co. were concerned with competition from the Soviet Union. Kosmitcheskiy reys: Fantasticheskaya novella, a 1936 fantasy with a lunar voyage that scientifically is just as accurate.  On the surface of the moon, the Russian movie is more sophisticated than UfA’s. Contradicting the impression given by the Murnau-Stiftung short subject, the Russian scientist Konstantin Tsiolkovsky did the math for most of the requirements of space travel back in the 1880s. All through my space-centric childhood, through the NASA programs and beyond, we were only told about the German pathfinder rocket men, probably to cement the notion of West Germany as our ally. Information about the Soviet Union was mostly negative, giving the impression of an undeveloped and technically primitive nation. Baloney.