An Encore Edition brings back Fritz Lang’s searing police corruption tale, with the great performances of Glenn Ford, Gloria Grahame and Lee Marvin aided by several pots of fresh, hot coffee. As is usual, Fritz Lang leads the way in modernizing a genre — this one is a keeper. 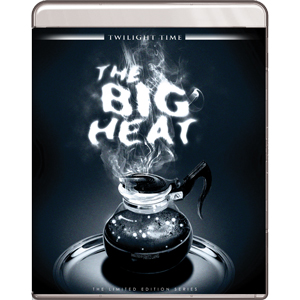 Four years after Twilight Time’s initial release, this Encore Edition will keep Fritz Lang’s searing crime tale in circulation for another round of film noir fans. And its extras have been augmented with a pair of celebrity introductions and a new commentary.

A top-rank core film noir in anyone’s book, The Big Heat is considered by many to be Fritz Lang’s best American film. More than most efforts in “the American style” this big city crime revenge story bears a strong connection to an earlier film form, namely German expressionism. It’s not a matter of stylized sets or lighting. The Big Heat bears Columbia’s early-’50s sparse look that can be pretty much summed up by star Gloria Grahame’s assessment of the décor in a cheap hotel room: “Oh … early nothing.” The other Germanic element in Heat is the same manic fire for vengeance that motivates Lang’s classic Die Niebelungen: when wronged cop Glenn Ford sets out to nail the men responsible for killing his wife, he tears the city of Kenport to pieces. We almost expect to hear the hysterical theme song from Lang’s Rancho Notorious: “… a story of HATE, MURDER, and REVENGE!” 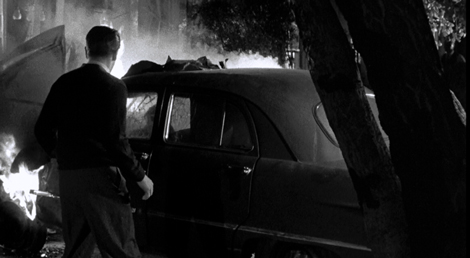 Incorruptible Kenport detective Dave Bannion (Glenn Ford) scoffs at barfly Lucy Chapman (Dorothy Green) when she claims that the suicide of police administrator Duncan was faked, that he was going to divorce his wife Bertha (Jeanette Nolan) to be with her. But Dave’s suspicions are raised when Lucy is found dead, with marks of torture on her body. Bannion’s police superiors and the widow Bertha indeed act as if under the direct influence of organized crime. This leads Dave directly to Mike Lagana (Alexander Scourby), Kenport’s crime kingpin. When the cop refuses to back down, Lagana’s associates Vince Stone and Larry Gordon (Lee Marvin & Adam Williams) strike out at Bannion’s family, with fatal results. His personality changed, Dave gets himself fired from the police force and begins a personal investigation. Vince and Larry laugh in his face until he secures the help of two more vulnerable women. Crippled Selma Parker (Edith Evanson) helps narrow the identity of Lucy’s killer. Playgirl Debby Marsh (Gloria Grahame) is impressed by Dave’s intimidation of the swaggering Vince. She tries unsuccessfully to seduce Dave, and instead empathizes with his loss. Vince punishes her disloyalty with a horribly painful act of violence.

The Big Heat begins with a shot almost identical to one from Lang’s Metropolis a quarter-century before: a suicide by revolver, showing only the gun lying on an executive’s desk. The film does not conform to the semi-docu police procedural noir style that dominated the ’50s, but is instead another one of Fritz Lang’s intense studies of cruelty and retribution. Dave Bannion is the good cop in a rotten city. The Police Commissioner plays poker with organized crime thugs, and anybody impeding business is found in a ditch outside of town, or floating in the river.

Despite the inroads of socially conscious play adaptations like Detective Story, The Big Heat has little to say about current ethnic or social pressures. The police precinct isn’t packed with juvenile delinquents or drug addicts. We get the idea that Kenport might be Utopia if it weren’t for those scummy mobsters. The only class-consciousness we see is totally cop-centric. Dave Bannion lives in a modest house with a stay-at-home wife (Jocelyn Brando), an appealing domestic partner. By contrast, the slimy Lagana has achieved riches and celebrity. The police provide free security for the fancy parties Lagana throws for his teenaged daughter. When Bannion’s own pre-schooler is threatened, Lagana can have her protective guard removed with just a phone call. Lagana is in the same league as the more discreet power broker Noah Cross of Chinatown:  you can’t call the police for protection against these crooks, because they own the police. 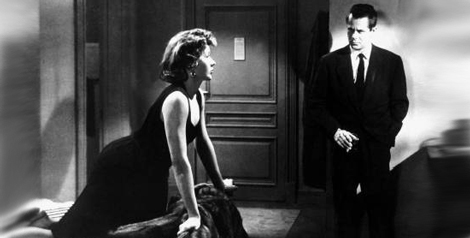 Pick up most any book on film noir and you’ll find an enthusiastic discussion of The Big Heat. The structural brilliance of the plot is usually credited to Lang, but it’s mostly all there in William McGivern’s book. Lang’s contribution is to focus on the ironies and the parallelisms, like the ‘protect my daughter’ theme mentioned just above. Debby Marsh and Bertha Duncan are indeed ‘sisters under the mink,’ a sorority that poor Lucy Chapman never gets a chance to pledge. Debby is converted from a good time girl seeking nothing more than  ‘expensive fun,’ into a Kriemhild-like avenging demon, paying Vince back with the very same violence he directed at her. And of course,  ‘the big heat’  of the title refers not only to the hoped-for blast of justice that will wipe out organized crime in Kenport (now that’s a fantasy) but to the scalding that converts Debby from a bimbo into a committed warrior.

Beneath the macho vengeance theme (with special guest female revenge) is a veiled criticism of Dave Bannion’s self-righteous crusade. Whether acting as an honest cop or fixated on hateful payback, Bannion’s efforts consistently put women in harm’s way. He pays little attention to Lucy Chapman’s plea for help. Dave ought to realize that Lagana has a long reach, but two more women come to a sad end just for knowing him. The only real survivor is another bar girl, Doris (Carolyn Jones). Dave happens to be present when Vince Stone burns her with a cigarette in front of a dozen intimidated witnesses. Bannion comes to her defense but offers her only a cursory check-up as she sits crying at a bar table. You’d think he’d be more solicitous considering that he previously ignored the equally innocent Lucy. No, he’s on his noble quest, and they’re just women of the night.

Bannion is more in his element when punching out villains, terrorizing men and women alike. He cynically sets up the cheap hood Larry Gordon to be rubbed out by his own men. Dave puts on the pressure but it’s really others that take the big risks. Dave busts open the Kenport syndicate, yes, but at a very high price.

Fritz Lang’s direction stays at a ‘just the facts’ remove until the confrontation scenes crop up, at which point he moves in for tight, sometimes erratic compositions. The violent scenes derive their tension simply by framing faces more tightly. Glenn Ford was never better. He does some of his best playing when the cracks show in his hatred, and he becomes sentimental about the woman he’s lost. Fifth-billed Lee Marvin is sensational as a lout in an expensive suit, a creep who mistreats women and thinks he’s impervious to the law. But the best performance comes from the capricious Gloria Grahame. An actress with a woefully scrambled personal life, Grahame presents Debby Marsh as an immature, accomplished tease but also a lost soul looking for a real relationship. Her self-identity destroyed by an act of mutilation, Debby discovers her new potential for hate, and becomes the movie’s most unstoppable force.

The finale is unusually disturbing. Debby and Dave can’t get together for obvious reasons. Twisted Hollywood glamour logic subscribes to the notion that mutilated women must disappear, and the Production Code mandates that sexually promiscuous ‘bad women’ must be severely punished, often with death.  As a moral warrior Dave Bannion appears to be immune from such criticism, yet his attitude helps cause much of the suffering. I believe that this unspoken conflict gives Lang’s movie an extra twist of tension. 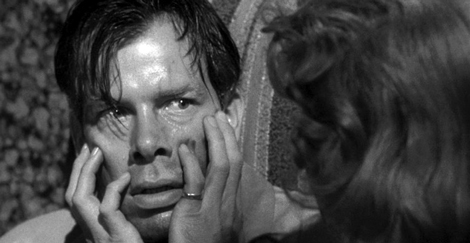 The Twilight Time Encore Edition Blu-ray of The Big Heat looks to me like the same sterling transfer as the first pressing, buffed to near perfection by the Sony restoration department.

Back in 2012 expert Bob Furmanek straightened me out as to the correct aspect ratio for The Big Heat, which was released late in 1953. Twilight Time’s 1:37 flat Academy ratio, as it turns out, is wholly accurate. 1953 was the changeover year to widescreen, but Lang shot this film a couple of months before the call went out to re-format all studio-shot Columbia product.

I once doubted this because the film’s title blocks are formatted for 1:85, a little high in the frame like all later Columbia films in widescreen. Bob explained that quite a few ’53 films shot flat were sent out with widescreen title sequences, to service those theaters that had dutifully changed over to the new screen shape. The Big Heat looks better full frame, but it almost looks just as good cropped off, favoring the top half of the image. So don’t tell anybody, but I cheat and watch it widescreen, just to be contrary. Fritz Lang was not a fan of widescreen formats. His later RKO pictures Beyond a Reasonable Doubt and While the City Sleeps were reformatted from 1:85 to Superscope (2:00).

Sealing the argument for the right aspect ratio for The Big Heat is the original trailer. It displays big text blocks that fill the whole screen, all definitely formatted for standard Academy 1:37. All hail Bob Furmanek; let the doubters be silent.

In addition to the trailer and Twilight Time’s beefy Isolated Score Track, the disc includes two new short featurettes, intros with directors Michael Mann and Martin Scorsese. I remember UCLA professor Bob Epstein or Stephen Mamber springing The Big Heat on us cold one afternoon back in 1973 — a perfect print on a giant screen, when the movie was only twenty years old. I was twenty years old at the time, and it seemed like something from the far, far past.

The new audio commentary is another informal Twilight Time coffee table gathering with Julie Kirgo and screenwriter Lem Dobbs, with frequent comments by Nick Redman. It’s a standard read of the movie, with Ms. Kirgo inquiring whether Fritz Lang was in any way sensitive to his hero’s apparent indifference to the suffering of the film’s women. I listened to the first half of the commentary. It’s good, but I was a little puzzled by some of the remarks. Kirgo tells us how unattractive she considers Glenn Ford to be, and positions him as a popular leading man but not an accomplished star. I’d say Ford certainly made his share of memorable films, if not a constant series of acknowledged classics. But he was for certain a box office leader for quite a few years, and the basic theme of his love life was that most women found him irresistible, both as a film star and in person. I’m willing to accept that he’s not as big today as he once was, but what actor is?

Kirgo and Dobbs both identify the original book’s locale as Philadelphia, but that the movie is set in a generic smaller town. The city in William P. McGivern’s book might be meant to be Philadelphia but it has a name, ‘Kenport.’ And how small a burg can Kenport be, when the view from Vince Stone’s penthouse apartment includes a vista of skyscraper office buildings?