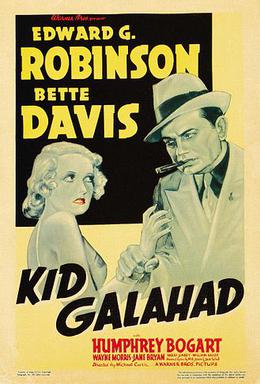 This 1937 boxing melodrama was eclipsed by its own 1962 remake starring Elvis Presley and suffered a humiliating title change (The Battling Bellhop) for TV distribution. Regardless, Michael Curtiz’s film, starring Edward G. Robinson, Humphrey Bogart and Bette Davis, is sufficiently sturdy to go 12 rounds with any comer and exhibited enough moxey to earn a rematch in 1941 as The Wagons Roll At Night, again with Bogart. For a thoroughly researched and fascinating look at Curtiz’ prolific career, look at Alan K. Rode’s comprehensive biography Michael Curtiz: A Life in Film, which can be ordered here.