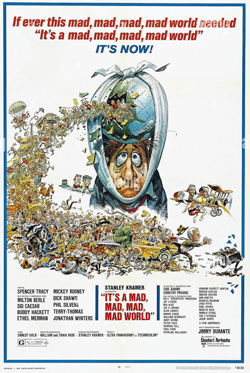 As big as it is broad, Stanley Kramer’s take-no-prisoners approach to comedy is embodied by an epic cast that includes just about every working comedian in Hollywood circa 1963. The majority of these much-loved artists are reduced to walk-ons but Jonathan Winters and Phil Silvers will not be denied—they rise above the chaos to connect with the audience in some genuinely funny segments. The film premiered as the first attraction of the then-brand new Cinerama Dome—though the hallowed theater was built especially for the three-camera process, Mad, Mad, World ended up as an Ultra Panavision 70 production.