Unsung actress Beverly Garland becomes TV’s first lady cop, in what’s claimed to be the first TV show filmed on the streets of New York City. This one-season wonder from 1957 has vintage locations, fairly tough-minded storylines and solid performances, from Bev and a vast gallery of stage and TV actors on the way up. 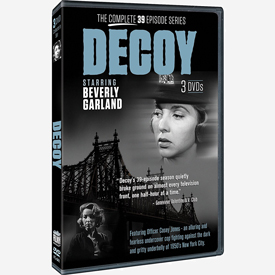 How did I experience TV in the 1950s . . . ?  As we moved so frequently, we had cheap televisions and my father didn’t put up a permanent aerial. I know than in 1955, on the high desert at Edwards, California, we didn’t get all the channels; and during the ‘sixties in San Bernardino the reception was terrible, so that most of the local Los Angeles stations came through weakly. Back when I had to sit through Shirley Temple Theater and boring episodes of Death Valley Days (‘here comes the twenty-mule Borax wagon!’) I lay on the floor watching a fairly smeary, low-contrast 18″ picture. No wonder a trip to the movies was something incredible. It didn’t matter what we saw.

I’ve never heard of the one-season 30-minute TV series Decoy, which was later re-titled Policewoman Decoy for syndication. I wanted to review it because it stars Beverly Garland, an actress who never got a shot at real stardom, but a favorite who contributed great performances to everything she ever touched, from several of Roger Corman’s early features to a terrific role in Noel Black’s Pretty Poison. Ms. Garland was always good and always busy, and the 1957 TV show could have been a big break for her. 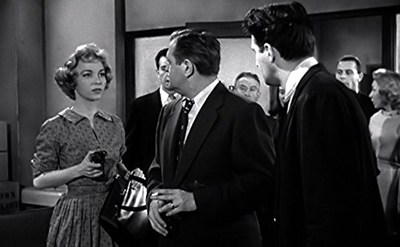 I was also curious because I’ve seen two types of ’50s TV drama shows shot on film. One kind is reasonably well funded and tries to maximize quality, obvious examples being Peter Gunn and Johnny Staccato. The other tries to squeeze out the needed forty (!) episodes per season as cheaply as possible, turning them out on an assembly line a la Dragnet. The series Highway Patrol was a huge hit, but I swear there’s almost nothing to it — it’s mostly made of material that can be shot for the whole season in one go: officers talking on microphones, Broderick Crawford stepping out of his car on the same three locations, snarling “Set up a roadblock here!” I think they found a day when he was sober and knocked off forty car exits, one after another.

Decoy was produced in New York and overflows with elements that still hold interest today. The publicity text that comes with the show claims that it was the first TV series filmed on New York streets, and the first with a woman leading character. Maybe that’s not strictly true, but the locations are impressive, and Beverly Garland is a forthright, assertive female character, the highly qualified NYPD cop Casey Jones. When asked if she minds going undercover in a prison, Casey snaps back the same lingo any male pro would: “It’s my job.” The show pays frequent visits to the precinct gym, where Casey proves she’s no wilting violet. At the end of each program, she breaks the fourth wall to speak to the audience, to make a little speech about law and order or careers for women. Sure, the scene serves as padding so that the actual drama only has to be about minutes long, but Casey Jones’ morale speeches are in full feminist mode . . . none of this ‘I hope I’m good enough’ baloney. They are perhaps a little too insistent that Casey be seen working the cylinder of her snub-nosed revolver, at least once per episode. 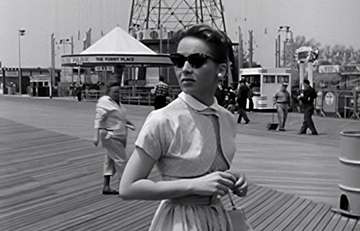 But Casey isn’t exactly blowing away crooks each week, as was the whole reason for being of body-count cop shows like The Felony Squad, eight years later. The violence is minimal. For most of the episodes I saw, even the dangerous crooks give themselves up at the end. But Casey does get to demonstrate her bravery.

The show probably should have been called Policewoman Decoy from the beginning, or perhaps just Policewoman. The non-feminist angle is that Casey is put on jobs where her sex is an important factor; she does a lot of undercover work, pretending to have a different personality, usually a ‘tough girl’ of one kind or another. And some of her jobs are more like social work, situations that require her to comfort victims and children, etc. But most start with a crime or eventually lead to one. I didn’t hear dialogue from anyone hinting that Casey is out of her element, working in a man’s world. Look at other shows from the era, and you’ll see professional women tasked to make coffee, or asked when they’re going to quit all this nonsense and go the marriage & children route. Decoy is refreshing for not making that a main theme. Which begs the question — could that have been a factor in its not being renewed? We’re told that it did fairly well in the ratings. 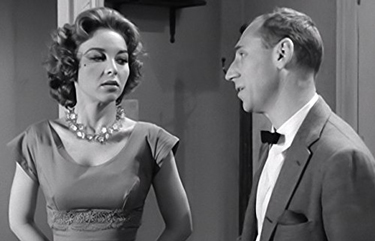 Ms. Garland has great fun with the variety of deceptions she’s meant to play. The police details may be a little obvious but for 1957 the tone is fairly adult. Casey has no standard sidekick or supervisor, and in the 12 episodes I watched I caught some actors coming back to play different characters, like the lovely Barbara Barrie. The most prominent name among the directors is that of Stuart Rosenberg, who would later distinguish himself with Cool Hand Luke and The Laughing Policeman.

Many of the shows are set indoors — playing out in prisons, etc., but quite a few let Casey wander up and down Manhattan and across the bridge to Queens. Here’s where the show really becomes fun today, and will probably mean even more to viewers who know New York better than I do. The location work is done on ordinary streets, giving us views of ephemeral landmarks like restaurants and record stores, and entrances to subways and the elevated train. In an early episode Casey tracks somebody through Times Square, which is playing the same shows as seen in Alexander Mackendrick’s Sweet Smell of Success. A marquee reading ‘The Magnificent Seven’ throws us for a moment, until we realize that we’re looking at a theater promoting international films — it’s clearly a reissue of the short version of Seven Samurai. The show is a sidewalk tour of ordinary parts of NYC as well. (Film Chest helps out by, in its insert pamphlet, spelling out a number of these locations, along with the leading actors and a one-sentence synopsis for each episode.) 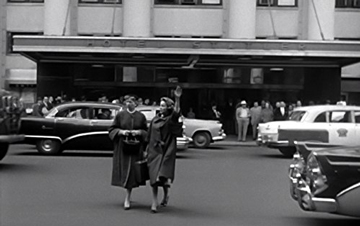 But I’d still say that the number one happy surprise with the Decoy TV show is its huge retinue of name actors. We don’t see that many bona fide future stars, but each episode has one and sometimes more significant actors. They’re clearly enlisted straight from the stage and the acting schools. Yes, many are better known from other TV shows where they made a good impression, such as The Twilight Zone. More of them than I thought had already been working for years in TV, but most of them look younger than I’ve ever seen them before. I hate reviews that just list actors, so I’m linking them to other shows that I’ve reviewed and liked:

Some of the ladies look practically like teenagers. As their career pigeonholes hadn’t been fully formed yet, a few get to play atypical roles. The cumulative image is of a lot of talent converging on a great deal of exciting TV production.

The cinematography is decent, and at least once in every show Ms. Garland is given an attractive close-up or nicely designed composition. Although the general byword must have been to get the things in the can as fast as possible, nothing seems rushed or slopped together. Film Chest has done well. 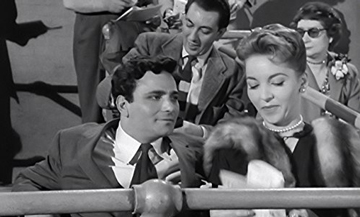 Film Chest Media’s DVD of Decoy contains all of the show’s episodes on three discs. I watched 12 entries and checked a dozen more, cheating to see what actors I could find. IMDB certainly helped, as whoever wrote included the episode guide didn’t cover all the notable names in each show. The quality is good overall, with an occasional touch of encoding coarseness. But I watched on a very large monitor and the images held together well. There is an older (2012) 5-disc set of Decoy that I haven’t seen, but the added disc space doesn’t mean that they’ve been encoded any differently.

It looks as if the show was organized so it could be reedited and shown theatrically, if there was a demand; screening it blown up and cropped for 1:78 yields perfect compositions. I did find one episode that had to be mastered from a less optimal source, as if the film elements were lost and only videotape remained. There may be more of these but I only ran into the one.

Besides the episode guide, the insert booklet has an essay that stresses (maybe over-stresses) the show’s importance to the history of women police. The show is dedicated to the service of female cops. Of course, those of us stuck watching TV in the 1970s will remember Casey Jones’ successor (successoress?) Sgt. Pepper Anderson, in the series Police Woman, played by Angie Dickinson. I can’t say that much progress had been made in sixteen years: the show managed to have Pepper go undercover constantly, but usually in disguise as a nightclub hostess or a stripper, to motivate all those slinky costumes. Give us Beverly Garland — she has episodes like that, but only a few.

There are no subtitles, but the disc does have closed captions.