In the early ’70s Walter Matthau excelled in three powerful cops ‘n’ robbers movies; the second sees him as a tough, laconic San Francisco detective charged with an impossible task — running down a machine gun mass murderer, with no clues and no living witnesses. 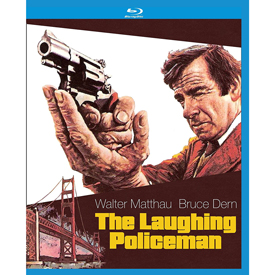 Viewers that like Walter Matthau in The Taking of Pelham One Two Three should consider checking out this darker and more violent police action show made just the year before, in 1973. Director Stuart Rosenberg (Cool Hand Luke) gives it all the grit of the toughest crime tales, while the screenplay by writer Thomas Rickman (Coal Miner’s Daughter) seems fascinated by the personal interactions of cops with varying attitudes to the job and different communications skills. It’s the first American movie made from a book by Swedish authors Maj Sjowall and Per Wahloo, Den skrattande polisen, one of ten novels about a police detective in Stockholm, Martin Beck.

The Laughing Policeman takes place in San Francisco and Martin Beck has become Jake Martin, played by Matthau. The 52 year-old actor started by playing villains, moved into interesting character actor territory and had only recently become a leading man in comedies and romantic comedies. Matthau’s floppy hound-dog face can be humorous, but it also conveys 101 expressions of discomfort, distrust and irritation, perfect moods for a detective faced with an impossible case. He’d just come from the excellent Don Siegel crime movie Charley Varrick, a very quirky mix of humor and seriousness that suited Matthau’s surprising range.

Director Rosenberg twists The Laughing Policeman in a tight knot from the first scene of a massacre on a late night in San Francisco — a man opens fire with a machine gun on a bus, killing eight people. The department swarms the scene and finds no obvious clues — but detective Jake Martin (Matthau) recognizes one of the dead as his partner, Dave Evans (Jake Costello). Lt. Styner (Anthony Zerbe) orders an all-out investigation. Martin’s new partner is Leo Larsen (Bruce Dern), a talkative fellow who doesn’t appreciate Martin’s monosyllabic, largely unresponsive manner. But Martin is difficult because he is truly perturbed. No direct clues show up. It looks as if his first partner Evans had been moonlighting on a case that Martin couldn’t solve, involving a wealthy investment counselor, Henry Camarero (Albert Paulsen). Checking with Evans’ girlfriend Kay Butler (Cathy Lee Crosby) yields nothing, and neither does Nurse Monica (Joanna Cassidy), a roommate of another victim, provide additional clues. Jake and Leo use snitches to learn about arms smugglers that might have provided the machine gun. They finally conclude that Camarero could be the bus killer. All they can do is take a chance and see if they can provoke him into striking again. 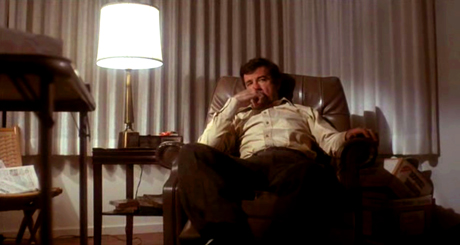 Walther Matthau is still amusing; just the way he pronounces ‘Camarero’ is funny. But the only jokes said in this show aren’t very funny, and Jake Martin isn’t amused by anything. He has a terrible home life with kids that barely talk to him, and he all but ignores his wife Grace (Shirley Ballard). One shot says everything about the relationship. Jake steps into his unkempt back yard, to get away from Grace. He tries to right a neglected barbecue that’s too rusted to stand up. That’s Jake’s marriage and sex life, all right.

Jake’s fellow detectives range are plodders with limited imaginations. James Larrimore (Louis Gossett Jr.) is a sharpie that insists that to get any work done, the riffraff in the poorer districts need to fear the cops. Bruce Dern’s Leo Larsen seems a joker at first, but he’s a dedicated snoop who’s good with people. He also picks up on the women and has an engaging sense of humor. The best material in the show has Larsen prodding and kidding the sour-faced Martin, trying to get him to talk, to share information. Larsen’s humor even gets through the thick skin of the nurse played by Joanna Cassidy. As in any good cop show, the snitches, drug pushers, prostitutes and other lowlifes form a string of memorable personalities. As this is the ’70s they must frequent into the bars and strip joints, one of which is owned by a brother of one of the bus victims. Detective Evans may have been following this victim when they were both surprised by the killer. 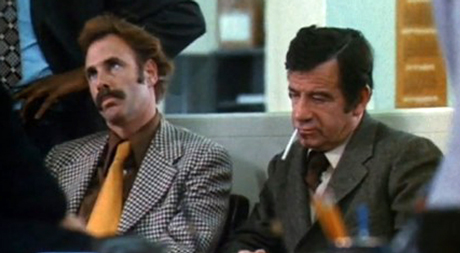 The look of The Laughing Policeman shows admirable restraint — it’s neither too slick nor overly grungy, as ’70s cop shows could be. San Francisco can’t help but look good, yet we see few if any of the more attractive areas. The bus killing and wreck happens on a hill, which seems wholly appropriate. There are a couple of action scenes along the way, as when Jake comes upon a violent hostage / barricaded sniper situation, with some particularly grim violence. Almost as disturbing is a scene where Leo and Jake agree to talk to some gun smugglers without arresting them, to try to get a lead on their killer. They find that the smugglers have a pickup truck packed with unstable dynamite, just parked in their driveway. It prompts another memorable line from Matthau, repeated at least three times: “Jesus, this is a residential neighborhood you’ve got this stuff in.”

The exciting ending brings us back to another potential catastrophe on a bus, yet the movie doesn’t jump into hyped action climax mode — no escalation of action climaxes, just a good clean suspense sequence in an awkward space, with Walter Matthau trapped on a bus with the armed killer. Low-key and totally believable, The Laughing Policeman is a very satisfying cop show. Fans of Matthau’s comedies may be surprised to see him in a wrinkled suit, exhibiting no sense of humor, but after a few minutes even the ‘cop with gun’ pose in the advertising materials stops looking like a parody of Dirty Harry. 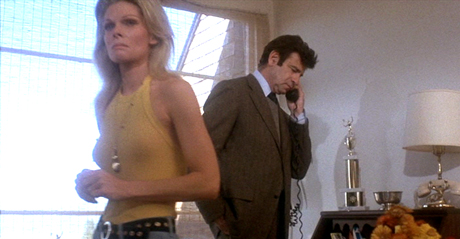 The KL Studio Classics Blu-ray of The Laughing Policeman is a good but not outstanding transfer of this 20th Fox release. The image is sharp but many scenes seem on the light side, with low contrast. Grain looks natural, with those atmospheric night scenes looking appropriately rougher. I noticed some dirt on the first reel but not thereafter. The audio is good and the dialogue clear, but Kino provides no subtitles.

The main video extra is a rambling discussion with actor Paul Koslo, who has one scene in the movie as a drug pusher who wants to get out of prison and is thus eager to cooperate with Leo and Jake. Koslo’s talk isn’t exactly full of information, but he does give some nice descriptions and opinions about Matthau and Dern. 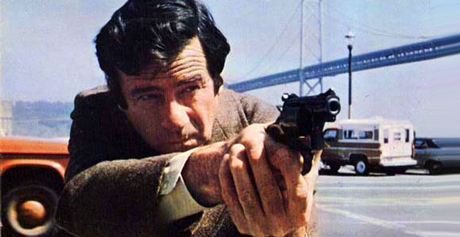 Much more informative is the audio commentary by a trio of knowledgeable film historians, Eddy Friedfeld, Paul Scrabo and Lee Pfeiffer. They’re on the case from the first shot, identifying actors and getting into their backgrounds. Even some of the more minor roles are filled by memorable people — Val Avery, Clifton James, Mario Gallo.

The trailer for The Laughing Policeman is present along with four or five others released by KL Studio Classics. A nicely assembled photomontage, backed by Charles Fox’s music, closes out the extras.