Liz Taylor scorches the screen (as least as much as it could be scorched in 1958) in a watered-down yet still potent Tennessee Williams adaptation. Paul Newman gets his Brando act together, and the rest of the show is stolen by ‘Big Daddy’ Burl Ives. 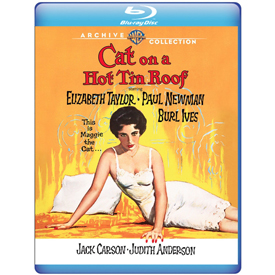 Cat on a Hot Tin Roof might have been the big Oscar winner in 1959 if it were not for Gigi, another major MGM production. Although the play has seen many major productions, Richard Brooks’ adaptation is the one people remember. Made by other hands, or with different stars in the lead roles, the show could also have been lambasted for altering situations in Tennessee Williams’ Pulitzer Prize-winning play.  Instead, star power and Hollywood gloss wins out. Millions saw the movie, and most of them likely had no idea that the play had been changed. None of its Academy Award nominations paid off in an Oscar, but it’s arguable that Burl Ives won his Supporting Oscar in the same year’s The Big Country more for his role here.

Richard Brooks’ movie is also just good enough to surmount the mountain of Hollywood lore behind its making. Due to illness, star Elizabeth Taylor missed a flight with her husband Michael Todd on the first day of filming. She became his widow when the plane crashed. Taylor’s ‘enduring pro’ legend was burnished by her decision to forge ahead with the shoot. Her star doubled in intensity, perhaps guaranteeing her acting Oscar win for a later, less worthy part in Butterfield 8.

The choice of Paul Newman was also made in the movie star pantheon.  Newman’s recent marriage to Joanne Woodward had become big news as well. According to Richard Brooks, the decision to film in color was cemented by the public’s desire to see giant dreamy close-ups of Liz and Paul’s eyes, violet and blue respectively. The presence of Movie Gods was a strong as the notoriety of Williams’ play.

Do filmed plays do best when they don’t try to hide their inherent theatricality? Cat on a Hot Tin Roof jumps from a couple of short ‘opening up’ scenes almost directly to a single-scene confrontation between Maggie the Cat (Taylor) and Brick (Newman) that lays out most of the film’s themes in a bundle of carefully chosen words. Thanks to a well-timed splatter of ice cream, we also get to feast our eyes on the stage center spectacle of la Liz changing her stockings, in fleshy warm Metrocolor. If there’s anything truly absurd about the picture it’s seeing Brick humiliate Maggie by rejecting her amorous advances. What man could?  I’d imagine that a goodly percentage of women are hypnotized by Taylor’s appeal.

Williams’ fine play doesn’t need a synopsis; let’s just say that the rich Pollit family of Alabama is operatin’ under a heap o’ mendacity, with secrets being kept from Big Daddy (Burl Ives) and Big Momma (Judith Anderson). An ugly battle for the inheritance rages, with Williams weighing the balance heavily in favor of one side. The venal Gooper Pollitt (Jack Carson) and his harpy of a wife Mae (Madeleine Sherwood) have bred a quintet of ‘no-neck monster’ kids, all to impress Big Daddy that his money should go to them. Wanting nothing to do with this hornet’s nest, the depressed Brick is opting out of the family through drink. Due to a traumatic recent event, Maggie and Brick aren’t sleeping together. He’d like to see the marriage fall apart, and is inviting Maggie to leave him. Maggie is determined to fight it out, if only to scotch the plans of the near-disgustingly fertile Mae, the maker of no-neck monster babies. 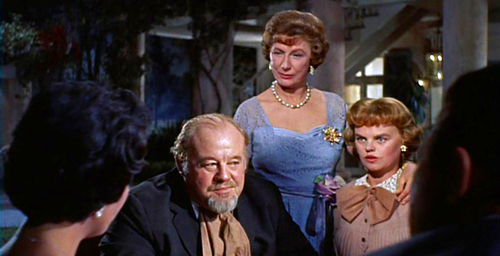 Tennessee Williams surely loves the conflicts he’s created, and is happy to criticize self-made men as well as their confused heirs. Big Daddy needs to put his house in order, but first he wants to sort out what’s wrong between Brick and Maggie. It all boils down to the one event that isn’t immediately spelled out in the dialogue, what happened between Brick, his football buddy Skipper and Maggie. Even in this bowdlerized version, we can easily intuit that some sexual-identity funny business was afoot between Skipper and Brick, and Maggie injected herself into it with disastrous results.

The tragedy here isn’t as grotesque as another Williams play that sees homosexuality punished with, good grief, cannibalism, but it’s enough to make Brick reject Maggie entirely. Symbolically you-know-whatted with his leg injury, Brick will have to face his father Big Daddy, a man that won’t take no for an answer. As in the phrase ‘life will find a way,’ Maggie the Cat won’t give up either — even if she must resort to some optimistic mendacity of her own.

I’m not sure how Cat on a Hot Tin Roof was packaged – did MGM own it outright?  Producer Lawrence Weingarten was an MGM-stamped property since the silent days, to the extent of marrying a Thalberg. The movie receives top studio production values all down the line. The interior-exterior set for the Pollitt mansion has more realistic backdrops than usual, and is helped out by an excellent matte painting or two. Writer-director Richard Brooks had worked in CinemaScope but for this story preferred to stick with spherical lenses; William Daniels brings real power to dozens of killer close-ups of his photogenic talent. Cat gets high marks simply by virtue of its stars, arguably filmdom’s most gorgeous couple of the decade. Ms. Taylor was born for bright, high-key cinematography, and she’s at her full wattage, physically. She’s no longer a kid, and not yet puffy-faced in the least. 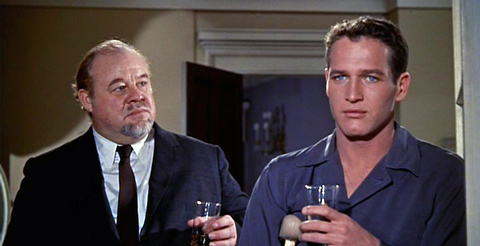 Judith Anderson has perhaps the most formal training of the company, but her role is given the least emphasis. It’s the unpleasant job of Doc Baugh (Larry Gates) to try to withhold the truth from Big Mama, or to at least wait until after Big Daddy’s birthday celebration. The fine stage actress Madeleine Sherwood made other movies but is almost completely associated with this, the most thankless role of all time. She originated it on Broadway. Mae Pollitt is the essence of ’50s Momism run riot, a mama viper disgorging viper offspring. Their greed will overrun the landscape, devouring everything. The part encourages Sherwood to squish her features into a knot, as if one’s whole face could ‘squint.’ Jack Carson had been playing unsympathetic heels since at least Mildred Pierce, even with a sideways detour as comic backup for Doris Day. His Goober knows that Mae’s overkill methods are ruining his efforts to snatch up the family fortune. He lamely attempts to rein in Mae’s excesses, but Williams and Brooks stop short of absolving him.

This is Burl Ives’ chance to shine. As the original stage Big Daddy, Ives has the part down pat and infuses it with depth and weight. His ruthless rancher in The Big Country is colorful but nowhere near as convincing. Just ten years before Ives had played a glorified bit singing folk songs in RKO’s Station West, but from here on would enjoy top billing. He managed to keep quiet his experience as an informer, naming names when the HUAC sought to cleanse folk music of  ‘subversives’ like Pete Seeger. Perhaps the ultimate irony is that Ives’ enduring fame now is as the puppet star of a ’60s Christmas show about Rudolph the Red-Nosed Reindeer.

As for Cat on a Hot Tin Roof, complaining about the changes to Williams’ play seems unnecessary now, as the word is out and information about the adaptation only a click away. The film’s finale is more upbeat, with more in the way of closure for the characters, and that’s fine. In terms of screwing up properties from other media, Hollywood has done much, much worse — and this show is extremely entertaining. It’s a bigger-than-life theatrical spectacle. When this Maggie the Cat talks about ‘being alive,’ and ‘having life in me,’ we can only sigh. Ain’t it the truth. 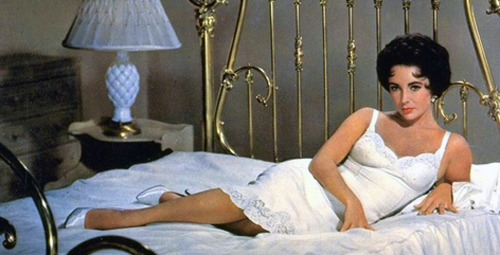 The Warner Archive Collection Blu-ray of Cat on a Hot Tin Roof gives Richard Brooks’ film a major boost. The color and sharpness are excellent, so either the negative was well preserved or some careful digital work brought the images back to their original luster. The earlier DVD was finally in the right aspect ratio, but now it looks ready for the theaters again.

The package only mentions French and Spanish, but the menus list many alternate language options. Want some fun? Listen to Maggie the Cat speaking Czech.

Warners’ old featurette Playing Cat and Mouse gives the drama in and around the production an okay if superficial spin. Its dim, low-res film clips serve as a good reminder of how the show used to look on video. The trailer is included as well. Donald Spoto appears in the featurette and also provides a full feature commentary. He knows his subject but fusses far too much over the star-worship particulars, and dumbs-down his technical explanations. Did you know that moviemaking is difficult for stage actors, because they have to chop their performances into little pieces, sometimes as short as three seconds?  Imagine that.

Cat on a Hot Tin Roof makes a good argument against judging directors by how few continuity errors are on view. They’re all over the place, and it doesn’t matter at all. To help the actors put something special into their parts, Brooks obviously didn’t hold up the flow of work for every detail. Things like how much ice is in a glass or where someone places their hands are made secondary to performance and pace. Editor Ferris Webster was no slouch, and neither were the cutters on Frank Capra’s movies, which are packed with minor mismatches and jump cuts. On the other hand, the desire not to hold up the actors with technical details might be partly responsible for occasional shots with soft focus. All directors will say that the best acting take is always the one with a technical flaw.

I’ve only seen one other production of Cat on a Hot Tin Roof. Brooks’ film looks especially good next to the absolutely awful 1976 TV version with Natalie Wood, Robert Wagner and Laurence Olivier. Go back to NCIS to enjoy Wagner’s lively guest shots, ’cause he’s just a terrible Brick Pollitt.