Psycho launched a thousand twisted sickos and pathological relationships in films, but none can best Noel Black’s fascinating, funny romance between a newly-released arsonist and a fetching high schooler, hungry for freedom and lacking a moral compass. The pairing of Anthony Perkins and Tuesday Weld is inspired. 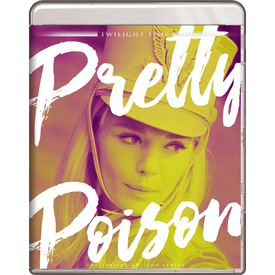 Although the dates don’t match up, I’m absolutely certain that I saw Noel Black’s theatrical short Skaterdater when it was screened as a warm-up for, of all things, the San Bernardino debut of Thunderball. We at first resented its sweet simplicity, but by the end everybody applauded. Some diehard Bond fans liked it more than they did the main feature. I didn’t catch the name of the young filmmaker, Noel Black, or that he attended UCLA film school. His skateboard romance movie ended up winning many top awards.

Three years later I read in some magazine about a murder thriller called Pretty Poison. It seemed that everybody was praising the director, Noel Black as an important emerging talent. His feature career got an iffy launch: great reviews but not that many bookings. According to Mr. Black, Fox related the nihilistic murders in the movie to the recent assassinations, and thought audiences would be turned off by a show with such a violent theme. Of course, that didn’t deter the studio from releasing The Boston Strangler that year. It’s more likely that the studio had a crowded list of releases that summer. Pretty Poison may have been shunted aside because the popular Planet of the Apes was held over for months. Or, perhaps some Fox executive with clout just thought Noel Black’s picture was sick, and took its distribution out of the fast lane. 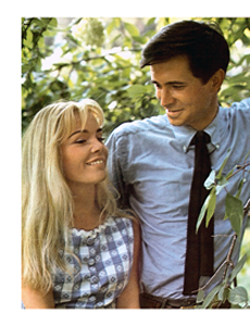 A genuine cult picture, Pretty Poison accumulated a deserved high reputation over the years. Seen now, it comes off as phenomenal, a perfectly judged tale of Psychos In Love. It’s absolutely credible in every respect. Ever met a girl who was more hell-bent than the bad boys, who could induce a guy to act against his better nature? This story is a captivating worst example. For the record, the actual title on screen is not capitalized: pretty poison. Maybe Bill Warren will appreciate my pointing out that detail, up in movie critic heaven.

Young Dennis Pitt (Anthony Perkins) has just won his release. He’s been institutionalized for years, after an arson incident when he was fifteen that caused the death of his aunt. Social worker Morton Azenauer (John Randolph) sends him on his way with a stern warning: stay away from fantasy. Pitt so completely indulges in made-up games and ‘what-ifs’ that Azenauer worries that people will think him insane. Dennis takes a job in a chemical company and is soon bored. He notes that the plant puts out large volumes of a red chemical into the local river. Then he meets the girl of his dreams at a hot dog stand. High school senior Sue Ann Stepanek (Tuesday Weld) responds almost too positively to Dennis’s oddball approach, pretending he’s a secret agent asking for her help on a mission. Both are after excitement. He’s dazzled by Sue Ann’s enthusiastic acceptance of his game as reality, and also by her interest in his romantic advances. Undeterred by Azenauer’s attempts to contact him, and by Sue Ann’s forbidding mother (Beverly Garland), Dennis enlists Sue Ann in his ‘secret mission’: the sabotage of the chemical plant’s ductwork tower that discharges the red chemical. What he doesn’t realize is that Sue Ann is eager to take his ‘games’ much farther than he could know.

Pretty Poison is a grabber on all counts — story, direction and especially its smart casting. After seven years working in Europe, Anthony Perkins’ film career was almost dead. His character here is some of his best film work. Dennis Pitt is definitely misaligned but the movie suggests that he is neither insane nor malevolent. His impulsiveness got him into big trouble as a teenager, and after years of custodianship he’s no longer interested in fitting in to straight society. He riles his boss at the factory (the great Dick O’Neill from The Taking of Pelham One Two Three) and plots to commit a ‘noble crime’ that seems much more rational now than it would in 1968 — striking back against a polluter. Perkins is just great, riding the line between being a joker and a serious nut, and living an adventure where he’s honest with nobody yet wants to be truthful with everybody. 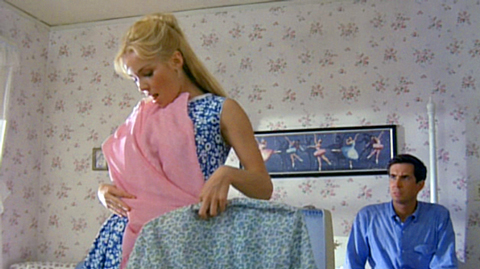 A chance for a sex life with Sue Ann would surely entice most young men to at least consider committing a crime. Tuesday Weld is superficially cast to type, but the role goes beyond her satirical parts where she played all-American teen sexpots fully aware of their sexual super-powers. Even the names of those characters are memorable: Comfort Goodpasture, Thalia Meninger, Barbara Ann Greene. Weld’s Sue Ann is basically Lolita crossed with a baby rattlesnake. Inside too many oversexed teenage girls frustrated by constrictive parents is a Sue Ann, pining to blow up the school, ditch the family and take off on a fantasy life of sex and fun. It’s just that an inconvenient mother bars Sue Ann’s path. [ They exist — as a teen I ran into more than one wild girl, who moved on when I failed to free her from a stultifying home life. Even I was wise enough not to swipe the family car to drive Candy Lewis to Las Vegas on a Saturday night before finals. ]

The achievement of writer Lorenzo Semple Jr. and Noel Black is the intersection of these two anti-social characters. We’re ready for Anthony Perkins to start stalking women in their showers, but the show goes in a different direction. Tuesday Weld makes concrete and believable the notion that a teen dish could be turned on by murderous violence. Sue Ann’s madness seems 100% real. She only needs a boy with the right trigger personality to reveal herself as a femme fatale. Sue Ann doesn’t know her own brilliance as a Borgia- like schemer.

Noel Black leads a great production on location in beautiful Massachusetts, whose many picturesque rivers are now hopefully a little cleaner. A sign says Stockbridge is a few miles away, which perhaps makes this Arlo Guthrie country? The production is so neatly scaled to the story that we don’t think of the show in budgetary terms, even though the only major expense would seem to be the cast. Also, the effects people construct an impressive factory waste chute tower to collapse in a key scene. 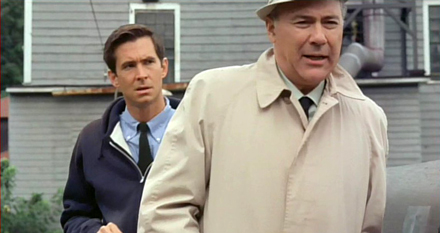 Former blacklist victim John Randolph is great as the social worker; he’s clearly Dennis’s best friend. That Dennis chooses to communicate with him in code at the finish isn’t a sign of madness, but a challenge –he’s giving Azenauer the best clue he can without breaking his unilateral love-pledge to Sue Ann. Dennis Pitt takes pride in his role as a fall guy, proving his devotion. He’s also a man of his word. 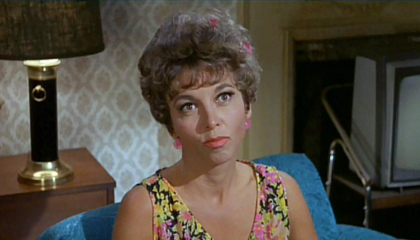 Fave actress Beverly Garland is a delight, making Sue Ann’s domineering mother seem 100% genuine. Mrs. Stepanek may be catty and jealous of her daughter, but she also sees through her like a window. Ms. Garland was a joy in all of her ’50s pictures, where she consistently brought seemingly hopeless genre pictures to vibrant life. She stayed happily busy, and this is one of her most rewarding roles. The characters in this show do seem very real. If only Mrs. Stepanek and Morton Azenauer could have gotten together and lived happily ever after.

The highly intelligent Pretty Poison is insightful with its more extreme content. In 1968 America was becoming more violent, fast. Sue Ann Stepanek is a wholly believable creature, who a few years before could exist only in an exploitation feature. It would have been great to see a sequel in which Dennis Pitt was freed on some technicality, and got back together with Sue Ann. In the realization that they were lucky to escape without long prison terms, they might start out to try to live ‘straight’ lives together, to make up for their sins. Yep, the fantasy story could be about the healing of America — Norman Bates and Lolita could try to make an honest go of it together.

Nope, it’s all about the horror of casual killing, of a lethal personality disassociated from morality. Pretty Poison is a first-rank psycho-thriller.

The Twilight Time Blu-ray of Pretty Poison is a fine encoding of this handsome color production. The interesting camerawork is well represented, with a good use of long lenses and scenes staged in depth. The green Massachusetts town is in itself attractive. Only the opening prologue looks a little grainy, compared to the rest.

Johnny Mandel’s soundtrack is encoded on a separate music & effects track, and the original trailer is here as well. From 2006 comes an excellent commentary with the late director, prompted by filmmaker Robert Fischer. Mr. Black explains everything with candor and in full detail. Another extra inherited from  Second Sight’s British DVD is a script excerpt and commentary explaining a deleted scene with ‘Mrs. Bronson’ (Clarice Blackburn), Dennis Pitt’s landlady. It explains why Dennis tells Sue Ann that he ‘was unfaithful on Wednesday,’ — in the final film the dialogue line makes no sense. 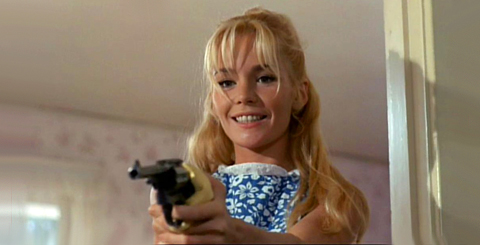 Twilight Time has also produced a new commentary with Nick Redman, his writer friend Lem Dobbs and the film’s executive producer, Lawrence Turman. The film was Turman’s next big project, immediately after his monster hit The Graduate.

Julie Kirgo’s liner notes sing the film’s praises, but take exception to its fundamentally sexist central premise of the femme fatale serial killer. Although women have had plenty of time to catch up with men in the true-crime stakes, in 1968 it was still somewhat retrogressive for a picture to Blame Mame. The vast majority of the murders and serial atrocities, then and now, are the work of deranged men, with innocent women frequently the victims. I would counter that the (admittedly few) ‘killer women’ I have met, only made me feel like I had been stabbed or shot.