A million American GIs are bivouacked in the English countryside, awaiting debarkation to France… and the green fields are loaded with young English women, whose own men have been off fighting for years. John Schlesinger puts together a good drama, with an excellent cast; he also avoids the expected ‘please wait for me!’ clichés attendant to this subgenre of war film. 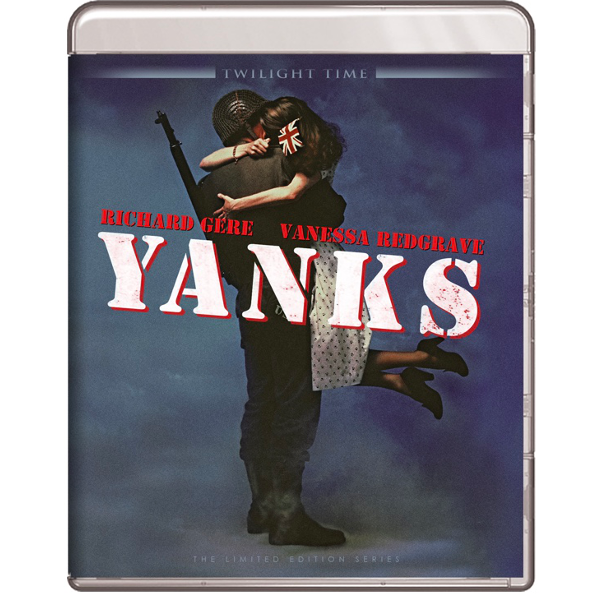 Director John Boorman got to tell his personal wartime home front story in his warm and funny Hope and Glory, and eight years earlier the accomplished John Schlesinger approached the same general subject. Packaged as a star vehicle for the young actor Richard Gere, Yanks tells the old wartime story: when young boys go away to fight, the women are left behind. In 1943 England before the Normandy Invasion, all the eligible local lads have been gone for years. Their local women aren’t alone, however: the country is playing host to a million young American soldiers, all interested in female companionship.

Thanks to a capable cast and director Schlesinger’s sure hand, Yanks is deeply felt and emotionally mature. Schlesinger charts the romantic progress of three couples, as charted in the screenplay by Colin Welland (Chariots of Fire) and Walter Bernstein (The Front). Unlike Hope and Glory any comedy is incidental; we’re told that the overlapping plot lines were suggested by things that happened to real people..

Arizonan Matt Dyson and New Yorker Danny Ruffelo (Richard Gere and Chick Vennera) are among hundreds of thousands of GIs relocated to rural England. But they’re luckier than most as they’ve found local girlfriends. Jean Moreton (Lisa Eichhorn) is at first reluctant to be Matt’s date, as she has disapproving parents (Rachel Roberts, Tony Melody) and a boyfriend already doing his duty overseas (Derek Thompson). While Danny plunges into an all-out romance with his new girlfriend, bus conductor Mollie (Wendy Morgan), Matt and Jean take it slowly. There are some cultural differences: the local girls are appalled by the racism shown black GIs by their own white comrades. Meanwhile, ranking officer John (William Devane) bends Army rules to divert officers’ rations — mostly liquor — to his men. He’s also carrying on his own tentative romance with socialite Helen (Vanessa Redgrave), a Red Cross volunteer. She has a husband away in the Navy.

Although Yanks dials the romance angle way up, it’s as accurate about the English WW2 experience as Boorman’s Hope and Glory. The Yankee invasion is in the spotlight. With the able-bodied Englishmen away fighting, the only thing between the American boys and the local girls are old parents and small children. The Yanks will help save Britain from the Nazi hordes, but at what price? Just the same, most townspeople receive them politely.

Boys are boys and girls are girls and many of the soldiers ‘get lucky’ with the local lasses. Like thousands of other girls, saucy Mollie is delighted to suddenly be in such demand, and responds positively to Danny’s puppy-dog desperation. Serious Jean is much more reserved. She resents the Yankee attitude at first, especially when Matt makes the innocent mistake of calling her a foreigner. She’s not 100% sure that her mother’s advice isn’t right: stay away from the dirty Yanks. But that charmer Matt Dyson wins all of them over. As a poor boy from Arizona, he knows what being a suspicious guest is all about. He’s the company cook and bakes a heck of a beautiful cake from scratch, with real eggs. Even Mom is impressed by Matt’s impeccable manners.

Savant avoided Yanks in 1979 because at the time I was underwhelmed by Richard Gere for what were probably poor reasons — why should a basically inexpressive male model get such great roles?  He’s just fine here, likeable and sensitive. I do wonder if Matt Dyson’s full head of tousled Tom Sawyer hair is accurate, as I believe fairly close cuts were required for GIs. As for Lisa Eichhorn, she can do no wrong after seeing her terrific (and completely different) performance in Cutter’s Way from two years later. Eichhorn had just come from Merchant and Ivory’s The Europeans. I’m sorry her career didn’t pitch her into a higher tier of stardom. Many extremely talented actresses of the late 1970s had the same problem — after two or three standout roles they seem to drop away. Yanks has no interest in soap opera sensation for its own sake. Vanessa Redgrave and William Devane make a nice couple for the other third of the romantic story, a mellow wartime dalliance between people whose marriage partners are far away. Helen is thrilled when the gallant John takes her on a B-25 joyride to Ireland to buy some booze for the troops, where she wins a small boodle from a slot machine. John’s wife has already asked for a divorce, but he puts no pressure on Helen. They keep their forbidden romance discreet and fireworks free, which is the only realistic path. However, their friendship is so public and affectionate, I don’t see how they’d avoid negative gossip.

Chick Vennera’s Danny and Wendy Morgan’s Mollie remain pretty much on a second tier basis, as comic relief and a prime example of close-quarters f-f-f-f fraternization. The relationship between Jean and Matt is a bit more volatile. Jean must overcome the sticky issue of obtaining parental approval, and she has difficulty dealing with other Yank soldiers that behave like hooligans. Jean’s intended is a Brit commando, and when he returns for a brief stay Jean’s family all but seals their engagement. Matt responds by getting drunk and starting trouble. It’s Richard Gere’s weakest scene, as his easygoing GI doesn’t seem capable of such hostility. The sexual tension and cultural differences explode at a dance. Seeing a black soldier dancing with an English girl, a white soldier (Everett McGill) incites a pack of Yank rednecks to initiate a full-on riot. In the aftermath Jean and Mollie lead the other local girls in inviting black soldiers to dance, a gesture that Matt can’t quite appreciate.

Yanks is primarily an English production, and Yankee screenwriter Walter Bernstein was most likely brought on to whip up dialogue with an American flavor. At least the Americans seem to be played mostly by Americans. I wonder what the English thought about New York girl Lisa Eichhorn playing the lead English lass? We’re told that Eichhorn had studied at Oxford, and in interviews convinced director Schlesinger that she was English. At least, that’s how the story goes.

The problems of war separation have always been engaging movie material. The theme hasn’t dated, especially because we now live in a perpetual state of war. Yanks ends on a beautifully simple note, refreshingly free of overhyped emotions. Matt’s farewell cake sends precisely the right message to a confused Jean, and she and Mollie rush to the station to make their goodbyes. Scores of females are doing the same thing: one lady shouts that half the women in town are pregnant. Production photos from the film concentrate on farewell kisses next to the troop train… but the actual film finds a fresher, more believable finish.

The show has some fine moments and others that might not make their full effect. Rachel Roberts’ sickness complicates Jean’s decisions regarding Matt, but they remind us of a replay of Wendy Hiller’s role in Jack Cardiff’s movie of D.H. Lawrence’s Sons and Lovers. Everett McGill’s racist soldier is suddenly singled out when he wins a pile of coins in a last-minute gambling spree. All that cash is meaningless, as he’s about to go into combat. He generously hands them over to Jean’s cute little brother, with the farewell line “Spend ’em for me, kid.” That detail says much more than would speeches about how a lot of the boys won’t be coming back.

Simon Harrison, the kid from The Wind and the Lion has a small part as Helen’s son; his return from boarding school helps put the brakes on Helen and John’s passion. The movie is rated “R,” but it’s a very soft “R”: just a fleeting bit of nudity and a curse word here and there. Oh, and also rampant immorality, if one is the kind of viewer who requires their entertainment whitewashed beyond historical recognition.

The Twilight Time Blu-ray of Yanks is the expected fine transfer of this good-looking picture; as Matt says upon seeing the green grassland of Northern England, ‘this is some pretty country.’ Schlesinger and his cameraman Dick Bush manage some very attractive scene transitions — one dissolve-through from a dialogue scene to the purple glitterball of a New Year’s dance is quite beautiful. The strong audio track maintains the proper regional speech, which makes some lines difficult to understand. The film has a lot of music — choirs, an orchestra, swing tunes at the big dances — but no Benny Goodman or Glenn Miller oversell here.

Universal gave Twilight Time access to the Music and Effects track for Richard Rodney Bennett’s beautiful score, especially the love music. On the full commentary Julie Kirgo and the late Nick Redman host actor Chick ‘Danny’ Vennera, discussing the movie on the fly. Vennera says that he met Richard Gere when they were both playing in Grease on the stage. Nick, bless him, immediately identifies writer Colin Welland as the actor who played the passive churchman in Sam Peckinpah’s Straw Dogs. Julie Kirgo’s liner notes make the case that Yanks is an anomaly in Schlesinger’s filmic output — an endearing show about basically nice people, and without a tragic conclusion.

No English subs appear, the same as on the old Universal DVD from 2005. I see no Closed Captioning logo on the disc either.  * So I’ve not tried to show Yanks to my wife, who quickly gives up when trying to understand indecipherable English dialogue.

* I confess, I don’t know how to access Closed Captioning from disc media, or from my Spectrum Cable. Some Savant, eh?