“Sorry, I just slashed my wrists.” “Well, tape ’em!”  This is the aftermath of the ’60s protest movement. Ivan Passer’s riveting murder mystery of flakes and losers in sun-drenched, guilty Santa Barbara expresses the rage of radicals faced with the growing class divide, and the arrogance of the wealthy. 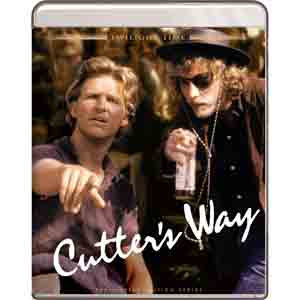 Sort of the bad-news post-graduate version of American Graffiti, Ivan Passer’s Cutter’s Way is a movie with a mindset and background that I partly lived through, just by being a penniless film student ‘hanging around’ Los Angeles in the early 1970s. Although I escaped Vietnam duty (by mercy of a 307 number in the 1971 draft lottery) and spent little or no time around the idle California rich, I certainly saw my share of unemployed, aimless student colleagues. I also did my share of ineffectual grumbling about Nixon and the System. Richard Bone and Alexander Cutter (the movie was abortively released first as Cutter & Bone) are key characters for that place and time. Author Newton Thornburg and writer Jeffrey Alan Fiskin use them to fashion what is really a thinking man’s Easy Rider. In a way, Jeff Bridges’ Richard Bone could be a younger, less brain-fried Jeffrey Lebowski, operating not in a hipster comedy, but in a laid-back. despairing, defeatist fog of Santa Barbara haze. 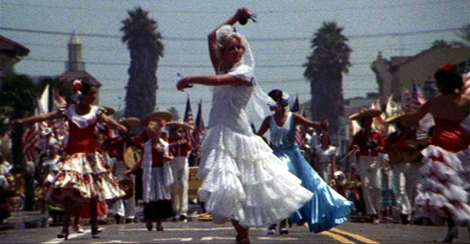 Disenchanted yacht bum Richard Bone (Jeff Bridges) hangs out with his old buddy and double-amputee survivor of Vietnam Alex Cutter (John Heard). Cutter is also an alienated malcontent with an extremely volatile personality that his alcoholic wife Mo (Lisa Eichhorn) somehow finds attractive. Late one night, Richard thinks he sees local oil millionaire J.J. Cord (Stephen Elliott in an alley where the bludgeoned body of a teenaged girl is found the next day. Richard would like to forget it all, but Alex seizes upon the possibility that the arrogant Cord might truly be brought to account for the crime. Alex conspires with the victim’s surviving sister Valerie (Ann Dusenberry) and cajoles Richard into helping entrap the oil baron. But considering Cord’s power, and the trio’s amateur extortion fumbling, it’s soon unclear who is trapping whom.

Cutter’s Way is funny, poignant and tragic. The vivid characters embody perfectly the fringe dwellers in the lush California lifestyle: educated bums and self-loathing intellectuals. Steadfastly refusing to commit to anything even as his youthful looks and virility fade, Jeff Bridges’ Bone has qualities in common with tennis bums and marina rats I’ve met. Alex Cutter is the essential anguished man, whose wit and friends are the only things separating him from a life on Skid Row. His enabling wife Mo, so perfectly incarnated by Lisa Eichhorn, drinks her way through a disability-check life on the edge of existence. So many of us who were aimless (or like my friends with frustratingly remote goals) ended up seeking out any kind of comfortable niche that might come along.

Every scene in this gem is a keeper, with dialogue and situations as deep or deeper than anything in Stone, Lynch, or Tarantino’s output. Alex’s wild antics are unforgettable. He foolishly baits the black pool players in the local bar, and smashes into the car next door just for the fun of watching his neighbor go ballistic: “Ha Ha, I better try that again!”    Cutter is an extremist simply because he has absolutely, utterly nothing to lose. He’s also wickedly funny: “Don’t ever orgy with a monkey. The little fuckers bite.”   Cutter latches onto the Cord case for reasons known only to him and Cord’s lackey at the yacht sales office, George (Arthur Rosenberg). Alex freely admits that he’s a conspiracy theorist: “I haven’t even begun to turn my imagination loose on this one!” All three leads demonstrate an incredible commitment to their roles, with Heard taking top honors. He convincingly portrays a one-legged, one-armed, one-eyed cripple without the show-off ‘acting’ usually associated with handicapped people on screen.

The book Cutter & Bone is even bleaker than Ivan Passer’s movie, and is marred by a conclusion that closely mimics the end of Easy Rider. Instead of the film’s feverish finish, the book has our pair follow J.J. Cord inland to his farm hacienda, only to independently fall victim to the industrialist’s long and deadly reach. The film retains the book’s paranoid streak but adds its own brand of ambiguity. (movie spoiler)   J.J. Cord’s infuriating attitude might be the same whether or not he was a murdering psychopath, and his draconian security forces are no exaggeration either. 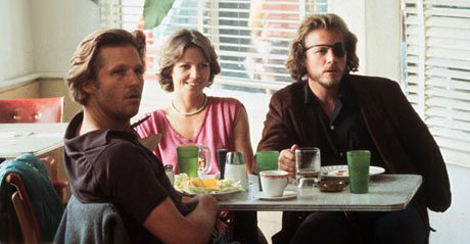 What brought Cutter’s Way into focus for Savant was the realization that it’s a loose transposition of Hamlet, of all things. The giveaway is in the very first scene, where Cutter introduces his drinking companions: “I give you Rosencrantz and Guildenstern, emissaries from the Danish court.” I remember the couple from the book because they were called the Ericksons, and identified as a pair of Weather Underground radicals passing quietly through Santa Barbara.

The Hamlet parallel works like this: Richard Cutter and Alexander Bone, one a possible mental case and the other merely indecisive, together represent the Hamlet character. (spoiler) George’s father was indeed murdered in the long-ago past by his old partner Cord, who usurped his place in big business, keeping George alive almost as a trophy. The emasculated George is living proof of Cord’s Prince-like power over his domain. But a bigger parallel elevates Cutter’s Way above the simpleminded ‘America is Evil’ posturing of Easy Rider. The Queen, Hamlet’s mother, is America And Her Ideals, of which Alex and Richard are indeed loyal subscribers. The late King is really Uncle Sam, who has been murdered by Corporate Big Business, represented by J.J. Cord. Cord has not only taken on the mantle of entitlement to all of America’s vast riches, he’s also sleeping with the old lady (to steal from the script of Spartacus).

Cutter’s doesn’t really care if Cord is guilty or innocent. In Cutter’s view Cord is fully responsible for all of it — Vietnam, Cutter’s wounds, George’s trembling subservience. Corporate tyranny has imposed an economic class system on what was once an America where most companies were run by ‘people,’ and the power of law and government still meant something. Old and corrupt, Cord’s lust for power drives him to victimize the young, with their strength and their undiluted sexuality. (additional spoiler) Cord killed George’s past and now he chooses to kill Cutter’s future. In the book Mo is newly pregnant, which in the film accounts for her choosing groceries instead of liquor in one scene.

What makes us feel so uncomfortable is Cutter’s need to dramatize events, and Bone’s essential unreliability. Even as Bone tries to do the right thing, playing Devil’s Advocate with his friend and eventually defying him, we get the sinking feeling that their suspicions will be revealed as misguided, that some are coincidences and others symptoms of their own paranoia. We’ve all heard deluded people raving about conspiracies. It’s scary to think that Cord and his unseen minions have it in for our heroes, but almost as terrible is the thought that Cutter is dead wrong. His quest animates his existence; his whole personality is based on raging against the machine. Cutter’s Way shows two flaky people going up against two citadels, one they can see and another that requires, “setting my imagination loose on this one.” From college forward most of us formed political ideals, yet few of us have not a single intention of ever risking the consumer comforts we’ve worked to earn. Seeing people really live out their shaky ideals is scary. 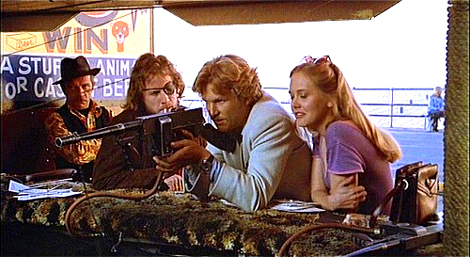 Cutter’s Way is an anti-paranoid conspiracy film: “You aren’t imagining it, fella, it’s real.” The wild tales of The Parallax View and most others of its ilk are easy to dismiss: ‘sinister armies secretly enslaving us with technology.’ At the black, bleak end of Cutter’s Way, Richard Bone finally takes a stand and makes a clear-cut committed decision, as life- altering as a decision can be. Done in cold blood instead of Cutter’s heated passion, his act of terrorism is the best scene of its kind Savant can think of, and as compelling as events in The Battle of Algiers and the inspired satire The President’s Analyst, where James Coburn’s milquetoast rebel is finally put in his place with the admonition, “Ya wanna change the world? Pick up the gun.” Author Thornburg clearly sides with his Weather Underground ’emissaries from the Danish court’ and his book is one of the few successful examples of radical literature to emerge from the ’60s. And Ivan Passer & Co. did a fantastic job turning it into a movie. 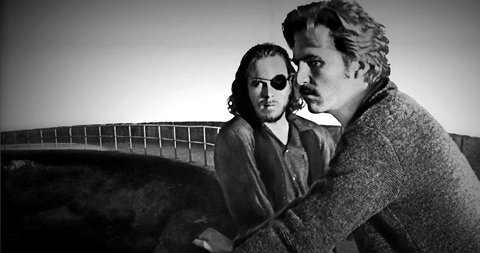 The Twilight Time Blu-ray of Cutter’s Way is a polished encoding of what was orginally a United Artists release fumbled in the wake of the Heaven’s Gate debacle. Jordan Cronenweth’s cinematography is often dark and moody. The neon El Encanto sign in one of the very first shots is finally legible, and the golden-toned lovemaking scenes no longer look as if the characters were painted orange. 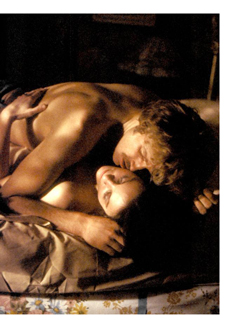 Difficult to overpraise is Jack Nitzsche’s haunting, quirky score, which expresses a feeling of cosmic sadness and regret. The brassy Mariachis used to represent J.J. Cord’s Santa Barbara empire come across alive and kicking. The isolated score track is pleasant listening in itself.

The film’s good trailer is included, and Nick Redman and Julie Kirgo contribute a full commentary track. They have the film’s history down and say a lot about the actors and Ivan Passer that I didn’t know. But they haven’t read Thornburg’s book, which is not as good as the movie but captures the time and place exceedingly well. They aren’t sure of some of the locations. After the movie’s brief theatrical run some friends of mine (Steven Nielson, Allan Peach, Robert S. Birchard) couldn’t find it playing anywhere closer than Santa Barbara, so they made a day out of seeing it. On the way up the coast they drove by the polo field at Will Rogers State Park, and in getting lost looking for the school where the movie was being shown, they happened to pass by the legendary El Encanto. They were duly impressed when both locations popped up in the movie itself.

Cutter’s Way has by now collected many enthusiastic fans, although it still isn’t half as well known as it should be. It’s a bona fide winner, a stealth classic. Do yourself a favor and set aside some time for it.