Giallos run hot and cold, but this one has plenty to recommend it — a serious outlook, a focus on elements other than gore, beautiful cinematography on terrific locations in Venice, and committed performances from Anita Strindberg, Adolfo Celi and an unusual choice, ex- 007 George Lazenby. Director Aldo Lado takes this one in a different direction than Giallo maestro Dario Argento — with a humanistic bent and a compelling performance by child actress Nicoletta Elmi. Plus a piercing music score by Ennio Morricone, sung by a children’s choir. 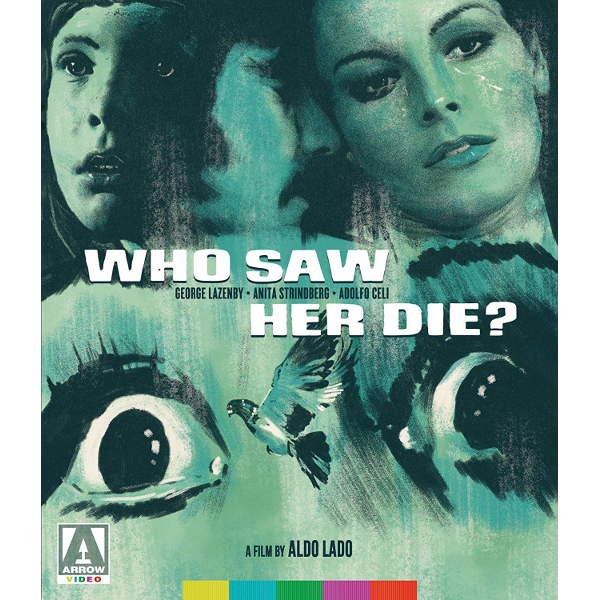 The sad little girl alone in the courtyard…

Perhaps it is not in the same league as Don’t Look Now, but Aldo Lado’s impressive Giallo Who Saw Her Die? nevertheless prefigures Nicolas Roeg’s movie in several ways. It’s about a damaged marriage in the wake of the death of a child, and it takes place in the baroque halls and moody alleys of Venice, where detectives and shady characters alike transit by boat. There’s nothing like a floating funeral procession to connect modern near-horror to more gothic concerns… a couple of sequences feel operatic, yet unforced.

I don’t review very many Giallos, and frankly respond only to some of Argento’s core titles — I’ve (major confession here) never bought into the overwrought visual delirium of his highly praised Suspiria. Argento never had much to say to me, even as I appreciated the sometimes clever scripting and frequent design & directorial graces. Remember those Italian fashion and design magazines, the ones that weighed about a pound apiece and were packed with exquisite color images?  The Argento that appealed created bravura shots for their own sake, like the fast trucking views of shockingly red high heeled shoes pacing back and forth, in giant close-up.

Who Saw Her Die? isn’t a classic in the Argento mode, but it has characters we can identify with as more than victims — something Argento normally couldn’t care less about. Director Aldo Lado has a sure hand with tot actress Nicoletta Elmi, who comes off as a real natural. Her relationship to her father feels real, and her tragedy is deeply felt. Lado uses (gasp) real restraint, something we don’t expect. The simple act of having a possession taken away by bigger kids humanizes the little girl on a higher level.

At first the film’s horror angle seems disconnected. A girl is killed in the snow ‘several years earlier,’ so when we meet successful sculptor Franco Serpieri (George Lazenby), greeting up his daughter Roberta (Nicoletta Elmi) for an extended visit in Venice, we’re immediately on guard. Franco has some colorful characters in his clique, but nobody overtly threatening. There’s the rich art dealer Serafian (Adolfo Celi), his straying woman (Dominique Boschero) and some odd hangers-on of various sexual persuasions. A friendly journalist encourages Franco to get back with his estranged wife Elizabeth (Giallo veteran Anita Strindberg) and the local priest (Alessandro Haber) offers advice when trouble comes.

When trouble does come, the melancholy Franco and Elizabeth do their best to cope, and Franco begins an unauthorized investigation of his own. All of a sudden everybody seems a potential killer. The journalist digs up coverage of similar child killings, including the one in the snow, five years before. Franco’s efforts have only one apparent effect — more deaths that may or may not be related to his case. Some genre books don’t even list Giallos as horror, unless a supernatural element is involved. From the time of Bunny Lake is Missing movies about the murder of children have always carried a feeling of discomfort — on some level, movies often represent our inner desires, whether showing us intimate scenes or antisocial behavior. If I never got into Herschel Gordon Lewis it was because it seemed all too obvious that there were viewers out there that Got Off on its cartoonish sadism in an unhealthy way. Don’t Torture a Duckling incorporates the murder of children into its Giallo business, with Lucio Fulci’s typical reckless abandon. Who Saw Her Die? ends up as a routine whodunnit, but with a strong human element.

Director Lado began as an assistant, most notably for Bernardo Bertolucci, and turned to writing and directing as the ‘seventies arrived. His first feature Short Night of the Glass Dolls follows the Argento formula of cryptic titles, often with an animal mentioned — cats, scorpions, etc.. His Who Saw Her Die? has sex scenes, some nudity but relatively little direct violence. He all but shows disdain for the requisite murder scenes. One takes place in a movie theater, but is not dwelt upon at all. Lado’s realistic suspense-chase scenes are never boring or perfunctory, which isn’t the norm in Mondo Giallo.

Lado directs his actors more carefully than does Fulci or Martino. None of the supporting actors act eccentric, waving the ‘I’m a suspect’ flag. The adults are handled with as much finesse as the child actress Elmi. We almost don’t recognize George Lazenby, who could never have been cast as James Bond looking as he does here, gaunt and weak. Instead of striding about like a cock o’ the walk, Lazenby’s sculptor seems more apt to collapse into melancholy. With his long hair and sideburns, he looks like George Harrison might look after a nervous breakdown.

I watched the movie with its original Italian track. When I sampled the English I thought I recognized Lazenby’s voice, but we’re told that he was dubbed in English as well.

The show looks and sounds great. Franco Di Giacomo’s camerawork is beautiful on this new scan, and the Ennio Morricone soundtrack adds immeasurably, giving the show a spooky feel it might not otherwise have. The featured children’s choir seems specifically targeted to this story. I’ve watched some Morricone-scored pictures of late that seemed almost randomly tracked, as if he just sent out a few trial scores and the director picked one. I just learned that Morricone’s superb theme Chi Mai was a hand-me-down when it was plugged into the Jean-Paul Belmondo picture Le Professionel. In this show, the creepy choir focuses our minds on the danger-to-children idea.

Who Saw Her Die? didn’t even get a U.S. release, which I’d chalk up to the absence of an up-chuckable horror scene every eight minutes. Dozens of Giallos finally reached America in the DVD revolution, and we’re told that that’s when this made its debut here.

Arrow Video’s Blu-ray of Who Saw Her Die? is is a beautiful new 2K restoration of the film’s original full-length Italian version. Soundtracks, titles and credits are viewable in English and Italian dubs. We’ve progressed a lot since the pre-DVD 1990s, when I remember a booth at a convention with dozens of bootlegged Italo horror VHS tapes, all with obscure titles. DVD sprang them on a generation of college-age early adopters, the Video Watchdog generation that became core Eurocult fans. I don’t ANYBODY knew who Fulci and Argento well before DVD. Twenty years later, Blu-ray restorations reveal these shows to be better made than anyone expected.

Those Venice locations and interiors are truly gorgeous, which is even more impressive considering that the film was shot on half-frame Techniscope. I wasn’t aware of any heightened granularity. Little Nicoletta Elmi’s freckled face fills the frame — she’s a vision of naturally beautiful childhood.

The Morricone music plays LOUD, which has an effect as well. Arrow lays on the extras, which are probably too much for me but will more than satisfy confirmed Eurohorror hounds. Although a different name is mentioned on Amazon, Troy Howarth does audio commentary honors. He’s an excellent host, using about half of his time for Who– specific thoughts, and the other half for more generalized Giallo history observations. Aldo Lado is present for a full hour’s interview, and he comes off as less scattered and more sensitive than the average Italo genre director: he doesn’t try to embellish his credits or accomplishments. Co-writer Francesco Barilli’s memories get a little more obscure, and he never quite explains why he and his partner felt compelled to use a certain kind of man as the villain. (One reason I bailed from Giallos was its tendency to blame screwed-up women or sexual ‘perverts’ for gory murders, usually with a cross-dressing aspect to throw us off the scent.) A third interview is with critic Michael Mackenzie, who analyzes the film from a different perspective, and even comes up with a different interpretation of the music score.

The fun extra is a half-hour interview with Nicoletta Elmi. Her working memories are as cute as she was / is; she was a ‘put me in an understandable situation and let me act natural’ little actress, and Mr. Lado handled her with discretion. She was the opposite of the ‘professional’ child actor, like Shirley Temple or Mickey Rooney. And it’s a delight to find out that she has made it through to 2019 in such good condition.

Galleries of art and a pair of trailers are presented — the English language trailer seems to be an export effort as it’s the same as the Italian. The IMDB gives no release date in England or America, so maybe it was just wishful thinking — did distributors figure that George Lazenby, with all his bad press, was box office poison?