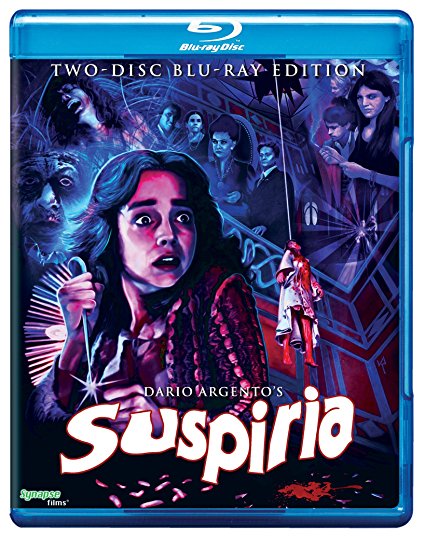 The story of a ballet school staffed by devil-worshipping harridans, Dario Argento’s Suspiria opened at New York City’s Criterion in the dog days of ’77. A friend was at one of those early matinees when, 26 minutes into the film, his companion leaned over and whispered, “This movie is evil.”

Jessica Harper plays Suzy Bannion, a transplanted New Yorker taking up residence at a German dance academy—just landed in the alpine splendor of Baden-Württemberg, the doll-faced ballerina makes her entrance emerging from an airport lounge lit like a broadway production of Dante’s Inferno. A windswept taxi ride bombarded by a neon-colored thunderstorm is no less melodramatic but it can’t prepare Suzy for the stark sight waiting at journey’s end – a scarlet-colored asylum that screams “stay away.”

She doesn’t—the moment the determined dancer dons her pointe shoes the atrocities begin; maggots fall from the ceiling, a blind pianist is devoured by his own guide dog and one by one her classmates meet their maker in a series of flamboyantly theatrical murders. 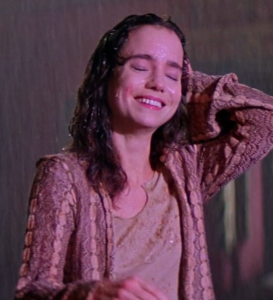 Once Suzy makes sense of a dying woman’s obtuse last words (“Iris… flowers”), a hidden passage reveals the bedchamber of the centuries-old queen of the coven – a croaking hag with a baked potato complexion. Suzy escapes intact, departing the burning academy ala Sissy Spacek’s queenly post-prom exit in Carrie—but the smile on her face as she lurches past the camera leaves the audience with the unpleasant possibility that she has found release from her tormentors but gone mad in the bargain.

“Great lovers should be seen and not heard” is a recipe that seems to work quite well for witches, too. Suspiria’s minimalist dialogue and even slimmer story line are no match for Argento’s non-stop visual attack, a crazy quilt of overstuffed art direction and intricately engineered death scenes—Grand Guignol staged by Rube Goldberg.

Argento’s co-conspirators, Luciano Tovoli and Giuseppe Bassan, handled the cinematography and production design—to those familiar with these artists, their hyperbolic work on Suspiria will turn heads; Tovoli was best known for his sun-drenched photography on Antonioni’s The Passenger while Bassan’s credits include, God help us, Cannibal Ferox, Umberto Lenzi’s cannibalistic shocker set in the leafy confines of a rain forest. Together they helped Argento summon up a uniquely grandiose hellscape; if Suspiria isn’t a great movie, it certainly looks like one.

In an interview with American Cinematographer, Tovoli laid out his game plan: “I decided to intensively utilize primary colors—blue, green and red—to identify the normal flow of life, and then apply a complementary color, mainly yellow, to contaminate them…”

The photographer’s poisonous color schemes are abetted by Bassan’s brazen production design, red, blue, and salmon-colored interiors adorned with spidery patterns that threaten to peel off the walls and throttle passersby—not to mention the exterior of the imposing academy itself, set, appropriately, on the edge of the Black Forest (for brave vacationers, that facade duplicates an actual house in Germany known as The Whale House).

The notion that Argento thinks with his eyes was verified when he cast the film—starting with the diminutive Harper who embodies the permanently terrified Mary Philbin of Chaney’s 1925 Phantom (presumably not lost on Brian De Palma when he cast her in his own Phantom of the Paradise). So brilliant as the despairing housewife of 1981’s Pennies From Heaven, Harper’s wide-eyed gaze is all the characterization she needs in Argento’s house of horrors, particularly when facing down the sinister Frauen who command the faculty—Miss Tanner, played by Alida Valli, star of The Third Man and unofficial mascot of world-weary Europe—and Madame Blanc, played by an imperious Joan Bennett as the more refined distant cousin of that diabolic Manhattanite, Minnie Castevet.

1977 was the summer of crowd-pleasers like Star Wars and Smokey and the Bandit so contemporaneous reviews for Argento’s audacious party-crasher leaned toward the dismissive. But the film found a few grudging admirers; the New York Times’ Janet Maslin missed the point while at the same time nailing it: “… (Argento’s) distorted camera angles and crazy lighting turn out to be much more memorable than the carnage.” 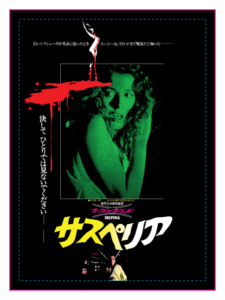 More critics lined up behind New York magazine’s John Simon (whose opinions, suggested Norman Mailer, were “as predictable as a head waiter’s.”) Simon characterized the film as “a horror movie that is a horror of a movie, where no one or nothing makes sense: not one plot element, psychological reaction, minor character, piece of dialogue, or ambience.” If the late Simon could have seen the Blu ray release of Argento’s classic, even he might have had second thoughts.

Synapse’s Blu ray, released just this March, has already gained justifiable fame as one of the most beautiful home video presentations yet produced—it’s gasp-inducing on more than one level. The two disc package arrives with the film on one disc and a plethora of extras on the second. They are, per Synapse:

Do You Know Anything About Witches? – 30 minute SUSPIRIA visual essay written, edited and narrated by Michael Mackenzie.

Suzy in Nazi Germany – Featurette on the German locations from SUSPIRIA.

A Sigh from the Depths: 40 Years of Suspiria – All-new anniversary retrospective on the making of the film and its influence on cinema.

And here is Edgar Wright on both the International and US trailers for, as he likes to call it, “Suuussssspiriaaaaa…”