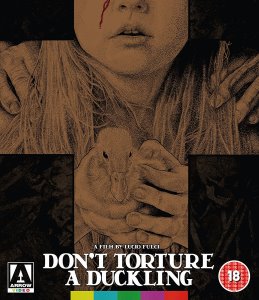 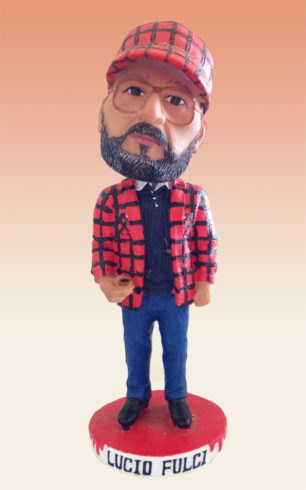 Lucio Fulci’s most consistent trait might have been his instability. In fact it may have been the Italian director’s defining quality; lingering throughout his films is the inescapable notion that, no matter how stylish or finely-tuned his mise en scene, he will surely find a way to fly off the rails and take everyone with him. He’s the crazy ex-girlfriend of filmmakers.

Fulci made his rep in the late 70’s and early 80’s with a series of crassly exploitative horror films, high on gore and low on logic. Nevertheless he began his career on his best behavior with 1959’s Il Ladri, an innocuous little comedy starring Totò followed by a spate of comic crime capers featuring the the execrable comedy duo of Franco and Cicco. He finally hit his sweet spot in 1969 with the oft told tale of Beatrice Cenci.

Cenci was a serious potboiler with a taste for medieval violence and a deep disdain for the church, themes that were ready-made for the intemperate director (in America the film was given the Fulci-friendly title, The Conspiracy of Torture). He followed up with his own entry in the Giallo Sweepstakes, A Lizard in a Woman’s Skin and then began production of what would be one of his most stylish and finely-tuned films, Don’t Torture a Duckling. Do you see where this is going?

Duckling opens in a rural town in Southern Italy, a tiny village that wouldn’t be out of place in one of Signorini’s sun drenched paintings of provincial life in the 19th century. That spell is broken by the appearance of a twisting freeway surrounding the village that reveals the film’s contemporary nature while signaling the villager’s sense of entrapment: the little hamlet has suffered a recent string of murders, all of them children, and the prevailing mood is close to panic as an ineffectual police force deals with an increasingly hostile townspeople.

The mood is not helped by the presence of two women haunting the scene, each a different kind of vamp; a new-on-the-scene sex kitten (Barbara Bouchet) who spends her days sipping orange juice in the nude while attempting to seduce 10 year-olds, and a self-proclaimed witch (Florinda Bolkan) who scowls and prowls through the village hidden beneath a shawl, her talons still dirty from the child’s skeleton she’s just exhumed.

Fulci and his co-writers, Roberto Gianviti and Gianfranco Clerici, do enjoy keeping us guessing; the cast is littered with herrings and all but one of them are red. And for once Fulci lets his themes develop with a minimum of his usual detours into crassly gory set-pieces or absurdly gratuitous sexcapades. Fulci deftly juggles the conflicts between the spiritual aspirations of the villagers and the impure aspects of their superstitions, the implication being that the townspeople’s collective unconscious is responsible for the mysterious specter acting out a ritualistic blood war between church and state.

The cast is uniformly excellent including the great Irene Papas as a care worn mother with a secret and Ugo D’Alessio as a pragmatic but warm-hearted police captain. Tomas Milian, who played everything from Raphael in 1965’s The Agony and the Ecstasy to a veritable army of pistol-packing vigilantes in some of Italy’s finest spaghetti westerns, turns in a close-to-the-vest performance as an inquisitive reporter.

As convoluted as the mystery is, there’s no heavy lifting to the guessing game and the revelation of the murderer’s identity is a bit of a ho-hum affair. But Fulci’s direction is as assured as it ever was, helped immensely by the cinematographer Sergio D’Offizi whose chiaroscuro lighting comes with style to burn. To be sure, the zoom-happy Fulci lacked the elegance of De Palma (Duckling seems, at best, like a rough sketch for a De Palma movie) but the New Jersey native with a penchant for cheeky camera moves must have been paying close attention to what Fulci was up to; in some respects The Fury and Dressed to Kill would not have found their demented poetry without Fulci’s groundwork.

Which brings us to the moment where Fulci, being Fulci, decides things have been proceeding too smoothly and takes that inevitable detour to crazy town. Suffice to say most serious directors of serious horror films do not want their audience collapsing in laughter during the finale of their film. Let’s just say that, while De Palma most likely welcomed the guffaws, we’ll never really know about Lucio.

Arrow has put together an exceptional package with this new blu ray release including an absolutely stellar replication of D’Offizi’s photography. The generous array of extras include an audio commentary from Troy Howarth (author of So Deadly, So Perverse, a history of Giallo films) along with a terrific assortment of short documentaries and several new interviews:

• The Blood of Innocents, a presentation by Mikel J. Koven, author of La Dolce Morte: Vernacular Cinema and the Italian Giallo Film

• Hell is Already in Us, a 20 minute video essay by critic Kat Ellinger

• A booklet with essays by Barry Forshaw and Howard Hughes