Anybody that appreciates good theater and good moviemaking will be in awe of Arthur Penn’s marvelous visualization of this tale of a determined woman achieving the impossible — teaching a child that can neither see nor hear. The knock down, drag ’em out scenes between Anne Bancroft and Patty Duke are unique, to say the least. 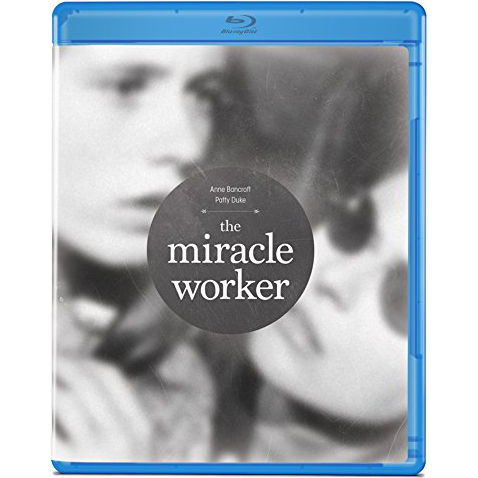 I can barely believe that Arthur Penn’s obviously superior picture The Miracle Worker wasn’t picked off by Criterion years ago. It’s that good — it ought to be rated as a top title in any studio’s library, and deserves to occupy the cultural perch bestowed upon the PC-friendly To Kill a Mockingbird. Although performed countless times on the stage and in other TV versions, William Gibson’s play is powerful in every respect. Other filmmakers might have tone down all the violent, loud and emotional excesses of the play, but Penn pushed them even closer to his film camera. Audiences have always responded positively, practically catching their breath after the play’s rollercoaster dramatics. Overcoming audience defenses, The Miracle Worker makes a basic emotional contact — we see something happen that does indeed resemble a human miracle.

Helen Keller on a visit to Charlie Chaplin’s film studio on North La Brea Avenue. ↑Now wrongly set aside, Penn’s picture was once revered as a many-sided legend. It definitely created two stars. The highly talented Anne Bancroft had been knocking at Hollywood’s door since at least 1951, and getting nowhere fast. Child actress Patty Duke made her name with this role, and would return to the play much later, playing the main adult part. The Miracle Worker launched her into TV fame.

Let’s not forget Arthur Penn, who also directed the earlier TV version. Movie-wise he had no traction, as his earlier western The Left-Handed Gun was poorly received, and did its star Paul Newman no favors either. It was Penn who asked to keep Anne Bancroft, when possible studio backers wanted to replace her with a more established star. One reason The Miracle Worker works so well as that both main roles arrive with no preconceptions. To the backwoods of 1887 Alabama comes Yankee teacher Annie Sullivan (Anne Bancroft), summoned by the frustrated Keller family in a last-ditch effort to tame their deaf and blind, uncontrollable daughter Helen (Patty Duke). An expert at teaching blind children, Annie runs up against a wall — she can’t even communicate with Helen, who behaves like a feral animal. Helen’s loving father and mother (Victor Jory & Inga Swenson) indulge her tantrums and resist Annie’s harsh methods as well. A determined taskmaster, Annie hasn’t had an easy life and has personal experience with family tragedy. But she convinces the Kellers to let her take Helen to an outbuilding, so she can try to break through to her, communicating through physical means. After a couple of weeks, there has been no success, but Helen has calmed down so much that the Kellers insist that she be brought back to the house. Once again Helen turns violent, smashing the contents of an entire room. But Annie withstands the physical punishment and persists in trying to get Helen to connect the touch alphabet she has learned, to words that align with objects. It’s a problem of frustrated communication: a big part of Helen’s problem is rage over her own imprisonment from sensory deprivation.

If The Red Shoes launched a million would-be ballerinas, the inspiring The Miracle Worker surely motivated a generation of teachers. Peace and love and everything good come through sympathetic understanding, and helping people to learn could conceivably save the world. This show makes the solving of an intimate, seemingly impossible problem its entire focus — and love and understanding sometimes needs brute force to see the lesson through. It’s a basic ‘liberal thesis’ drama with the difference that it doesn’t endorse the gentle path. A little fireball of undirected energy, Helen Keller has a blind will and a powerful ego that resist all attempts to control her. She’s an ultimate juvenile delinquent rebel — she not only doesn’t understand ‘the world she never made,’ she can’t even get a reasonable look at it. Typical angels of troubled youth take the gentle path, but that hasn’t worked in this case. How can Annie convince Helen’s weepy, defeated parents that the way to get through to their daughter is to be as tough as nails? Arthur Penn doesn’t worry about the rules that demand that filmed theater be opened up and the performing dialed down — he has Bancroft and Duke go at their conflict even more furiously than on stage, with his camera zeroing in on tiny details. ‘Big’ explosions of screaming and smashed furniture erupt in close-up as much as they do in wide shots. When the critical focus backs away from the riveting performances, the most noted section is an extended tantrum sequence. We’re already highly aware of a teacher-pupil battle of wills: Helen apparently thinks Annie’s ‘instruction’ is an attempt at domination. Back in the house, the battle re-ignites the moment Helen is allowed to slip back into her old ways, becoming again the indulged wild child. Annie clears the room and attempts to force her to eat properly, and all hell breaks loose for several minutes — Helen is completely unrestrained and Annie must fight back in kind. It’s rough stuff that makes audiences gasp as well as laugh — somebody might get seriously hurt.

Anne Bancroft brings something new to American depictions of strong women. Annie Sullivan’s own vision is greatly impaired, and she’s considered a problematic teacher by her own school — tactless and Irish-stubborn. She’s not the best fit with the Keller household, at least not at first. Arthur Penn introduces the movie with intense scenes that might be from a horror film about a family curse. Helen’s parents are shocked into hysteria over their daughter’s infirmity. The prologue/title sequence sees Helen staggering around as a Nosferatu- like shadow on a staircase. When she reaches skyward on a grassy hill, uncomprehending of the world around her, her mime is like that of Boris Karloff in Frankenstein, beckoning for his creator to lead him out of the darkness. With the reverent tone of the music, some of these images remind us of Dreyer’s Ordet, where a man is similarly lost in world that has overpowered his senses. In his montages and his control of period details, director Penn shows a control over the image not apparent in his older western.

After such an emotional and physical workout the uplifting ending struck audiences almost as strongly as a Dreyer-like miracle of faith. With the lifeline of communication established, a brilliant girl will finally be able to become a thinking, social human being. One has to be pretty cynical to not respond positively to the film’s message, and the liberal audience of the day surely interpreted the story’s emotional-philosophical breakthroughs as proof that miracles can transform the world one person at a time. Is there really a magic key to liberate the best in all of us? Or do we first need a society with different values?

Cuban-born cinematographer Ernesto Caparrós’ aim seems to have been to give The Miracle Worker the look of an Ingmar Bergman movie, with a deep focus and soft gradation of contrast. The movie communicates the period atmosphere extremely well, with only a vintage train telling us that we’re in the second half of the 19th century. Director Penn has a firm handle on his filmmaking, shaping scenes in a way that doesn’t make us aware of camera moves and changes of point of view. When the big dramatic scenes unfold, the invisible camera technique becomes a transparent window to the performances.

Of course these are ‘big acting’ roles likely to attract major award attention. The picture earned five nominations and both actresses scored with deserved wins. I’d think that Ms. Bancroft easily won over her competition, with such an unusual, demanding and undeniably successful perf. Patty Duke edged Angela Lansbury out of her third and last bid for a Supporting Actress Oscar. Of course, in Hollywood legend, the Academy Awards in 1963 is now most notorious for the way Joan Crawford used Bancroft’s nomination to upstage her career rival Bette Davis. Not nominated herself, Crawford secured the gig of accepting for Anne Bancroft, in case the unable-to-attend actress won.

For at least twenty years The Miracle Worker was one of those pictures certain to garner nods of admiring approval whenever mentioned. It also is the kind of show that snares passers-by when it’s on TV, especially if one of the Helen-Annie plate-smashing and hair-pulling battles is underway. But hey, it’s in B&W and nobody under fifty knows or cares anything about the actors or the famous Helen Keller. Yet, today’s audience is a bit like Helen Keller was: strap them down and force them to watch a few minutes, and some of them will actually find out what great movies are all about — not in the TCM ‘Let’s Movie’ marketing way, but as a genuine personal connection. Olive Films’ Blu-ray of The Miracle Worker is a happy thing to report — the transfer is better than anything I’ve seen before, a richly textured example of brilliance in B&W. I mostly remember old TV viewings that showed the film full frame and diminished some of its intensity. On a good-sized monitor Arthur Penn’s close-ups are really powerful. The audio is equally clear, which is good because the original track elements for a great many United Artists movie have long been MIA.

Olive has no extras on a movie that deserves a lot of attention. It really seems criminal, back in 2000-2005 when we could pitch DVD documentary projects to MGM, that so little opportunity was taken to nab interviews before people passed away: Bancroft in 2006, Penn in 2010 and Duke in 2016. I finally saw a fine, lengthy Penn interview for the UK disc of his The Chase — if only the same could have been done for more of his other big pictures.

There’s a lot more to Anne Bancroft than just her famous role as Mrs. Robinson, although the actress’s essential toughness figures strongly in that stellar performance. One tries to imagine a show that would place Bancroft side-by-side with Patricia Neal, another actress that by the 1960s was given no-nonsense roles of exceptional depth. Anne Bancroft is perfect as the fierce China doctor in John Ford’s 7 Women, a movie that didn’t fulfill its promise but ceratinly shows what she could do. But for sheer shout-to-the-rafters acting power, it all began for Ms. Bancroft in The Miracle Worker.