What can you say to such success? Mike Nichols and Buck Henry’s sex satire defined ‘the generation gap’ for the sixties. Dustin Hoffman sprang forward from obscurity and Katharine Ross was the object of California desire. Anne Bancroft’s Mrs. Robinson freed the image of the ‘complicated woman’ from the clutches of the Production Code Stone Age. The broad comedy scores with every joke, and there’s a truth beneath all the odd things that ought not to work. 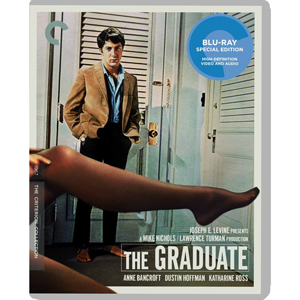 It’s not easy to explain how big a thing The Graduate was when it hit in 1967 — early 1968 for non-city dwellers. This very adult story swept in before anybody realized that the loosening of the Production Code might result in a picture hitting the screens that couldn’t discussed among a church group. That’s exactly what happened to me — at age 16 I was working for a pharmacy when a minister came in and engaged my boss in a six-minute harangue about the decline of Western Civilization, based upon the existence of this abominable movie. When this red-faced man saw me standing there, he asked me if I’d seen it. Like a dummy, I said yes, and he proceeded to tell me what was wrong with young people. What made the situation strange is that the minister was normally a composed and charming man. Did he even see the picture? I don’t know. But he blew a fuse.

1967 was the year that people threw about the phrase ‘the generation gap.’ It existed, because even though we played the Simon & Garfunkle records, I can’t imagine having a discussion with my parents about a story where a college kid has sex with his girlfriend’s mother. I’m sure that my own children picked and chose what they talked to me about, but not because they felt I couldn’t handle it. In the ensuing years The Graduate has gone up and down in one’s estimation — at times it seems so broad and unrealistic, that we wonder why it was so big when it was new. Simon & Garfunkle are no longer the musical gods they once were, too. But that’s all second-guessing about a picture that’s (choke) almost fifty years old now. The Graduate exemplifies a concept distilled by the insightful William Bayer: a movie that ‘clicks’ with an audience is one that captures a desire, an attraction, a trend, before the public knows that it’s even interested in the subject. I can’t think of another movie that came out of the void, landed at our feet and was immediately recognized as an unexpected gospel. None of us were from Beverly Hills, or were pampered graduates being seduced by middle aged women while jetting around Hollywood in a sports car with Katharine Ross. Yet we knews that The Graduate told our story.

Just back from Mars? The Graduate is about the confused college graduate Ben Braddock (Dustin Hoffman), who withdraws from his pushy parents (William Daniels, Elizabeth Wilson) and hides out in his pool and his room rather than do anything about ‘his future.’ He falls prey to his parents’ friend Mrs. Robinson (Anne Bancroft) an unhappy wife who thinks that seducing Ben is a way to stave off her personal feeling of boredom. Ben lets the weeks melt away until a big problem arises: the Robinsons’ daughter Elaine (Katharine Ross) is back, and her father and Ben’s parents think he should take her out on a date.

When I saw The Graduate in early 1968 it was if The Movies had suddenly become very adult, very funny, and very relevant. I didn’t know what alienation was, but suddenly I had this attractive image of Ben Braddock sitting at the bottom of a pool, or framed by his bedroom aquarium, telling me that I was underwater too. At age 16 I identified perfectly with Hoffman’s Ben Braddock, who looked and acted more like a nervous teenager than a college graduate. Critics were fast to point out that the character made no sense, that although Ben Braddock was supposed to be a track star and the editor of the school paper, he behaved like a churchmouse cowering in the corner. But it’s really just a comic exaggeration of how kids behave at home under the influence of Mom ‘n’ Dad, as opposed to what they’re like away at school. They were two different worlds.

The Graduate is jammed with inspired acting, from Hoffman’s sure-footed interpretation of his (self-contradictory) white bread nebbish to Anne Bancroft’s fairly amazing Mrs. Robinson, a proto- desperate housewife who made psychological sense. Whenever soap opera movies imagined straying wives, the bottom line seemed to be that they were at basis somehow bad, holdovers from the old idea of vamps and femme fatales. Mrs. Robinson is a person in pain, with no companionship from her husband and no way to express her unhappiness. The picture is a cartoon, but everything about Mrs. Robinson is dead serious, even when she participates in the bedroom clowning with Ben. People can get hurt in relationships, and Mrs. Robinson has broken at least 5 of the basic house rules, more than one of which come under the heading, ‘unforgivable.’

The fantasy is rich in detail. We know that Ben and Elaine aren’t rebels, really, as his rebellion isn’t going to jeopardize his access to his fancy car, the full refrigerator, the maid service and the luxury pool. That we understood Ben’s pampered-existential dilemma seems interesting now — we Americans will take any principled stand that our patriotism and our faith asks of us, as long as there’s no interruption of color TV and Diet Coke. We’re told that Buck Henry is responsible for the balancing act that is the screenplay of this show. I’ve read the raw script, which comes across as a series of stand-up comedy routines, some of which don’t have punch lines. It’s the overall concept imposed on the material that makes it fly.

I don’t know who would represent the rise of The Director in Hollywood better than Mike Nichols, who mades five or six brilliant, daring movies one after another. The seriousness set in almost immediately with Catch-22 a ponderous but consistently amazing epic black comedy. Nichols brought to bear genius-level directing skills with the actors, and his creative leadership inspired original work from every talent who signed on with him. The sets, costumes and particularly the cinematography of The Graduate set it apart from everything made before: long lenses, shallow focus images and a creative use of the zoom lens. Steve Soderbergh talks about a magic quality that ‘a movie going right’ gathers around it, when all the good qualities seem to be attracted and the bad qualities repelled. So much works well in The Graduate that could have been bad, that the director must be credited as the genius element making it all work.

I suppose that The Graduate gained our approval because we liked its happy, totally absurd ending, which said ‘this is correct,’ even though it makes no sense. Nerd Ben Braddock runs like a gopher, not a track star, but he’s fast enough to rush to the rescue like Sir Galahad. What should be a terrible scene, the grand standoff in the church, suddenly seemed the most important thing we’d ever seen. A hopeless situation — shame, ignominy — turned into a triumph, with Braddock using a big cross to hold off those Evil adults the same way Peter Cushing kept Dracula at bay. Like William Bayer said, Nichols and Henry delivered the exact fantasy that the audience wanted to see at exactly the right time, before the audience knew what it wanted. The rest is inspired visual comedy. Nichols was the master of dialogue-driven stand-up humor, but for his finale he pulls off an extended no-talk two shot that Buster Keaton would have applauded. His absurd, wafer thin sweethearts suddenly seem more real and fleshed out than great characters from literature. Some aspects of The Graduate may have gone in and out of fashion — this has to happen when most of a film’s visual innovations become immediate clichés — but the film overall is just as great as ever.

I’ve seen many video incarnations of this show, but The Criterion Collection’s Blu-ray of The Graduate is the first version that reminds me of the way it looked new in theaters — wide, clean, and pictorially flat, almost like an elongated comic strip. The colors are rich and cool, with the Robinsons’ downstairs dark and lush, a real den of luxury. All those ultra-long telephoto shots in Berkeley look perfect in this movie, and seem lazy in so many pictures made afterwards. Did European directors feel they had permission to do smash zooms, because Nichols used then so well here? One perfect example is when Ben and Mrs. Robinson, soaking wet, say farewell outside Elaine’s room. A close-up on Ben cuts to a close-up on Mrs. Robinson, whose eyes would seem to be meeting his — until the picture zooms back to reveal a distorted set, with Ben actually twenty feet away, and Mrs. Robinson staring at nothing. It communicates so much!

Criterion retains the mono sound of original prints. Paul Simon’s guitar is so rich that I always thought the audio was in stereo. An optional 5.1 remix is offered as an extra. For us teenagers, the music almost overwhelmed the movie experience. Even that poster with Dustin Hoffman staring at Anne Bancroft’s leg seemed fashioned by something greater than Hollywood. I suppose it’s inevitable that it be used as the cover illustration

Disc producer Karen Stetler has seemingly scoured all available sources of key visual material onThe Graduate, which must have busted the budget. An older audio commentary has Steven Soderbergh talking with Mike Nichols, a track just as rewarding as their previous pairing on a commentary for Catch-22. Also present is a vintage academic commentary from UCLA’s Howard Suber, from 1987. Could it have originally been for an early Criterion laserdisc? Dustin Hoffman’s new interview video piece is pleasant and illuminating and even shows a hint of humility. Producer Lawrence Turman and writer Buck Henry share an excellent conversation, in which they become quite enthusiastic about their experience creating the movie. A third interview featurette, Bobbie O’Steen’s analysis of her husband Sam O’Steen’s editorial work on The Graduate, is also entertaining and illuminating.

A 2007 roundup of directors talking about The Graduate is basically a lot of praise, and The Graduate at 25 is a thoughtful making-of celebration. Very welcome are TV appearances from Mike Nichols (1966) with Barbara Walters and Paul Simon (1970) with Dick Cavett. It’s pleasant to see creative movie people talking about their work honestly, without immediate publicity or marketing motivations. The actors’ screen tests are also present, along with an original trailer and an insert flyer essay by Frank Rich.