A big welcome to UK disc purveyors Indicator, or Powerhouse, or how does Powerhouse Indicator sound? Savant’s first review from the new label is a favorite from the Columbia library. The extras are the lure: the company has snagged long-form, in-depth interviews with James Fox and director Arthur Penn. Everybody’s written about The Chase but here Penn tells his side of the story. 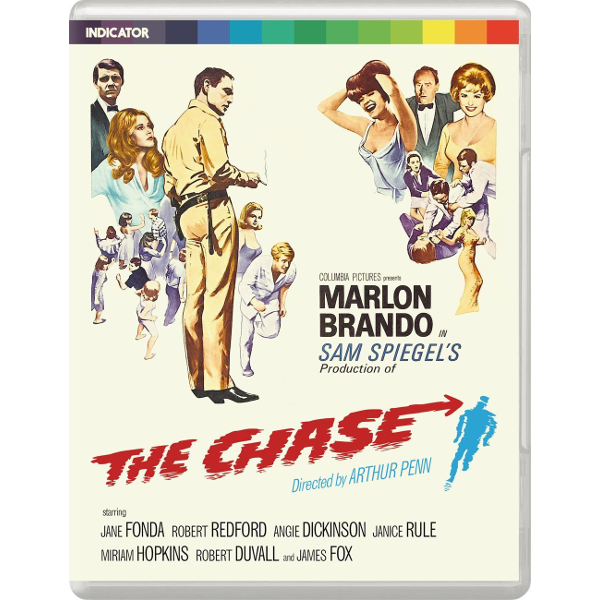 Yes, I reviewed Twilight Time’s Blu-ray of The Chase just about a year ago, so why am I reviewing a competing product? As with many foreign discs, it’s the extras. I was hot to see a short subject on Franju’s Eyes Without a Face and to hear Tim Lucas’ commentary, so I bought an English disc of that title. I got an English disc of The Day the Earth Caught Fire because I was too impatient to wait for a U.S. release, and I sent off for a U.K. copy of On the Beach because the U.S. version is out of synch.

I hear that some collectors of horror and fantasy pictures are grabbing up foreign discs because DVD Beaver reports that the encoding bit-rates are higher. I have a friend who will buy any version he finds of a Harryhausen film because, well, because he wants to and that’s that. I understand entirely — if Mongolia released a funky version of Major Dundee, I’d be online seeing what the exchange rate is.

Arrow Video, at one point a U.K.- only distributor, expanded into the U.S. territory a couple of years ago, to our delight; lovers of horror pictures in particular are finally getting definitive versions of favorites. The quality and extras put together by these relatively new disc boutiques are near-definitive as well, and they don’t mind spending a little extra to nab older extras worth the effort of repeating. A new company called Powerhouse has arrived; and their branded line is Indicator. Their discs are All-Region. They have a new series of Ray Harryhausen pictures on the way, and I’ve decided to tout this Arthur Penn picture because of the extras. That’s why the bottom section of this review is longer than the top; if you’re after more pontificating & opinions on Chase, by all means see my review of the very good Twilight Time disc from last October.

Here’s the essential stuff to know about The Chase. It’s from a play by Horton Foote, turned into a screenplay by Lillian Hellman, and then reworked some by Foote again. Producer Sam Spiegel angled for a road show winner with a huge cast of stars and a respected director, but after his experience with David Lean on Lawrence of Arabia — years of bank account-breaking location filming in 65mm — he decided to do things differently. Most of The Chase was filmed on Hollywood back lots, with other California locations standing in for Texas. Spiegel let the artistic director Arthur Penn shoot to his heart’s content, and then fixed it so that Penn couldn’t oversee the all-important editing phase. The whole picture is a producer’s cut, from one end to the other.

The story is political dynamite for 1966. The critical drubbing started with the outspoken Pauline Kael, who reacted strongly to the depiction of Texas as a pit of American Evil. Tarl, Texas is owned and run by Val Rogers (E.G. Marshall), an oil millionaire with everybody in town under his thumb except for Sheriff Calder (Marlon Brando), who doesn’t take kindly to the aspersions of various Rogers executives that he’s Val’s bought dog. Already a hotbed of alcoholism, guns, infidelity and wild parties, Tarl goes nuts when news arrives that local bad boy Bubber Reeves (Robert Redford) has broken prison and murdered a man on his way home. Val’s married son Jake (James Fox) is having an affair with Bubber’s wife Anna (Jane Fonda), which everybody seems to know about except Val. Milquetoast bank officer Edwin Stewart (Robert Duvall) thinks Bubber is on his way back to kill him. Bubber’s troublemaking poor trash mother (Miriam Hopkins) thinks Calder will shoot Bubber to make Rogers happy, and offers him a bribe to spare her son. The town boils over into violence that nobody can control.

The Chase has a bad rap for what some people think is its overcooked story and exaggerated characterizations. Everything is rigged to create tragedy, but the only really annoying element is a creepy retired couple (Henry Hull and Jocelyn Brando) that wanders about at night like Greek Chorus, commenting on all the depravity they see. To me the film’s main fault is the back-lot look for many scenes, with street sets familiar from TV shows. This is disguised by terrific Panavision cinematography and some good art direction, especially for an enormous conflagration in a junkyard (how symbolic!) that gives the film an apocalyptic finish. John Barry’s dynamic ‘western’ score underscores the grim spectacle.

Audiences have never liked being preached to that their country is venal and corrupt. The main complaint is that the pessimistic story is a liberal New York indictment of Texas for the killing of JFK three years earlier. Kael accused the moviemakers of staging a ‘hate Texas’ show, yet what we see is wholly believable. But it’s not exactly subtle, either. The ending recreates Jack Ruby’s rubout of a prisoner in custody and was surely one shock too many for complacent moviegoers. In 1966 any depiction of the violence that was already tearing up America was deemed ‘divisive’ and ‘unconstructive.’

The pleasure comes from Arthur Penn’s tight direction, Marlon Brando’s wickedly committed performance as Sheriff Calder, and watching the other great actors mesh. The Chase has probably the most exciting movie appearance of Janice Rule, and we get nice work from Steve Ihnat, Richard Bradford, Angie Dickinson and Clifton James.

For those of us who enjoy movies that throw down the gauntlet, Penn’s show is a terrific piece of political shock theater. It’s also a giant coincidence / worst possible scenario kind of movie machine … there’s a certain masochistic pleasure to be derived from seeing so many personal story threads converge into one apocalyptic tragedy.

Indicator’s All-Region Blu-ray + DVD of The Chase (1966) is a fine transfer and encoding of this Columbia/Sony title; it may have a higher bit rate but on my very good 65″ LG 4K set, I could tell no difference. U.K. collectors, you have a winner here.

The difference is in the extras, and they will appeal mainly to fans of ’60s movies like me, that for years have read about The Chase’s position in the political scheme of things. In fact, critic J. Hoberman’s fantastic book The Dream Life: Movies, Media and the Mythology of the Sixties works The Chase deep into the fabric of the struggle between liberal and conservative factions in those tense years. He likens it to L.B.J.’s ‘Great Society at Home,’ when America was cooking up a foreign war while coming apart on the home front. The extra that makes the difference is a lengthy (an hour?) interview with director Arthur Penn, taken in 1996 by Paul Joyce for a show on Marlon Brando. Penn has been quoted so often about The Chase that it’s good to finally hear the stories from his own mouth. He verifies most of what we’ve heard — Spiegel set him up reasonably well and let him make the movie he wanted to make. Penn confirms his suspicion that being frozen out of the edit was a pre-planned Spiegel maneuver — the producer knew that Penn would be tied up directing a Broadway play, and arranged for The Chase to be edited in London.

The rumor has always been that a ‘magical version’ of The Chase, with a much better Brando performance, was lost in the dailies. The story that’s gone around is that Penn shot ‘safe’ low-key-follow-the-letter-of-the-script takes, and then let Brando run free on other takes to improvise a more radical approach to the character. The inference has always been that Spiegel had his editors skip all the experimentation and stick to a just-the-facts version, mainly all the takes meant as a fallback. In other words, we’re supposed to watch The Chase thinking that the Great American Movie was filmed, but left in the outs.

Arthur Penn doesn’t fully endorse the legend. He says that Brando did all kind of great things we’ll never see, and that if he had been allowed to cut the movie, it would be much better. I don’t see Penn as an overly indulgent director, and 1966 is too early for a director to go more than a few months cutting, so I believe him when he says that a better Chase, a ‘Penn’ cut, was lost. Maybe Penn would have given the film a more daring continuity structure, or at least minimized that foolish Greek Chorus business.

Penn’s interview is good, hard key source material that scholars writing about the ‘sixties could use.

Fairly lengthy interviews with Arthur’s son Matthew and actor James Fox are new as well. Matthew just explains why he thinks the picture is great, while Mr. Fox mostly disappoints the interviewer by answering many questions with neutral answers — he liked working with this or that person, etc., but didn’t have a lot of personal or insightful contact with many of them, especially not Brando. Fox also has no illuminating personal interpretation of the film — he just confirms the things we already know about it.

Powerhouse retains Twilight Time’s isolated score and trailer and also gives viewers TT’s audio commentary, with Julie Kirgo and Nick Redman sharing a track with Lem Dobbs. Other extras add an image gallery and an 8mm digest version — from 135 minutes down to twenty. The UK disc’s attractive cover art is from the original ad campaign.

Not included with my check disc is a booklet, described below. It is said to round up “an overview of contemporary critical responses, and historic articles” on the film, so I hope to read it at some point.