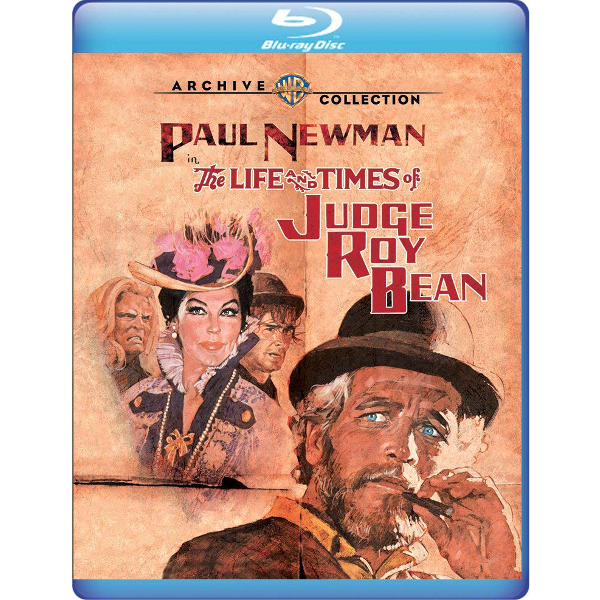 When John Huston movies are good, they’re great, and when they’re not they’re bad in a watchable way. I’m told that Huston didn’t have a real hit between The Night of the Iguana in 1964 and The Man Who Would Be King in 1975, but we always ran to see his new pictures. I personally love The Kremlin Letter, The Mackintosh Man and Fat City, but I know I’m in the minority. The 1972 The Life and Times of Judge Roy Bean is not exactly core John Huston material. It’s a Paul Newman vehicle for the newly-formed First Artists’ film company, and its ‘hot’ writer John Milius was following in the steps of Francis Coppola by leveraging his scripts into a directing career.

Newman must have been attracted to the project’s wacky take on the Roy Bean character. Nobody except film fans will know that the show is a return to the subject of William Wyler’s 1940 The Westerner. That marvelous acting opportunity earned Walter Brennan his third Supporting Actor Oscar. Nothing has changed much. In place of Jo Swerling & Niven Busch’s concentrated characterizations, screenwriter Milius gives us loose comic episodes that undercut the values of traditional westerns. Newman’s task as Bean is to grumble and mumble a series of ironic and irreverent one-liners. The other characters are sentimental ciphers. The whole thing is amusing, and two or three times it’s fall-down funny. But it’s also slack and directionless, and leans on the ‘frontier fable’ conceit to maintain its shaggy dog narrative.

Bank robber Roy Bean (Paul Newman) stops off in Vinegaroon, Texas and is robbed and beaten by the thugs he finds there. His response is to conduct a bloodbath and set himself up as the Law West of the Pecos. He deputizes a quintet of starving bandits, who are soon bringing in hang-able criminals with confiscate=able property. Bean’s idea of justice is how ever he feels at a given time. He loves Maria Elena (Victoria Principal), the orphan who saved his life and stays by his side. He also loves (from afar) the famous actress Lily Langtree (Ava Gardner), his dream of feminine perfection. Visitors to Bean’s enclave include the Reverend LaSalle (Anthony Perkins), the luckless, stammering thief Sam Dodd (Tab Hunter), and Grizzly Adams (John Huston), who leaves Roy with a new pet, a ‘Watch Bear’ (Bruno the Bear). Roy’s enemies include the The Original Bad Bob (Stacy Keach) a frightening albino outlaw killer, and the scheming Frank Gass (Roddy McDowall), who first tries to commit a James Addison Reavis- like land fraud on Roy, and then stakes his claim as a predatory attorney.

Milius and Huston’s gambit is to wax reverential on the worship of classic westerns, and then undercut every detail with cynical joke dialogue. This Roy Bean is that dependable rustic type, the lovable hypocrite. He empties the pockets of ‘evildoers’ before he hangs them, and frequently quotes the Bible to give himself credibility. Bean keeps a fat law book, as if possession of it makes him a Judge. If a passage contradicts his desires, he just tears those pages out. John Milius’ notion of frontier freedom, is that the West is joyful simply because the Alpha Male big bull gets his way. The Mexican peasants stay out of sight, happy to be irrelevant. To form his new township of Langtry, Bean plays Alexander the Great, assigning prostitutes as wives to his no-account deputies. A year or two later, the women have become intolerant blue-noses, just like the nasty ‘civilized’ biddies in John Ford’s Stagecoach. Paul Newman’s Judge grouses and chews scenery and gets the most out of the laugh lines that tag most every scene. The truth is that the show has a severe case of the cutes, perhaps inherited from his monster hit Butch Cassidy and the Sundance Kid. Milius just adjusts the jokes for the ‘mud & rags’ western style then in vogue. Although Roy Bean isn’t much of an acting stretch, Newman achieves more here than he does in Robert Altman’s equally shapeless Buffalo Bill and the Indians, or Sitting Bull’s History Lesson, another long title in search of a movie.

In keeping with the scattershot fable quality the film has more than one narrator. Both Anthony Perkins and Tab Hunter’s characters address the camera directly and make observations, as if writing about the Judge in their memoirs. One is hanged and the other ‘disappears into the desert,’ never to be seen again. John Huston delivers the ‘Watch Bear,’ who serves as slapstick comedy relief much like Clint Eastwood’s orangutans in Every Which Way But Loose. Bruno must have been the nicest bear in show biz, as he chews away Paul’s cigars and takes being screamed at point blank without retaliation. Bruno features strongly in a comic ‘musical interlude’ with an Andy Williams vocal, a country picnic where the bear takes a ride in a swing.

It’s possible that Milius or Huston thought that this “Marmalade, Molasses and Honey” music video break was a good idea, but I’m betting that it came about because the real power behind the movie, Paul Newman, thought it a commercial audience pleaser. Did fellow First Artists partner Barbra Streisand lobby for the hiring of lyricists Marilyn Bergman and Alan Bergman? Raindrops don’t fall on The Bear’s head, but the sentimental montage does remind us of Sam Peckinpah’s The Ballad of Cable Hogue. The Anthony Perkins character reminds us of David Warner, as well.

… not Dirty Bad Bob the Mexican,
but the original Bad Bob, the mean one, the Albino…

The show isn’t all comic skits, but the sublime skit moment in Life and Times is Stacy Keach’s five-minute stint as Bad Bob. In flowing white hair, Keach is scary and funny at the same time. He looks like the villain from the newer Mad Max movie. His demise is right out of the Waterhole #3 rule book: “The Code of the West / Is tried and it’s true / do unto others / before they do unto you.” Bob also conjures memories of the ancient Mad Magazine parody Hah! Noon! in which Marshall Kane deals with an outlaw by calling out the National Guard. 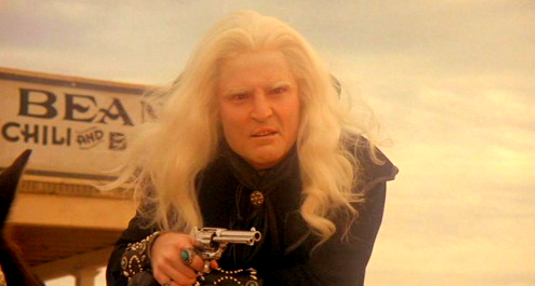 In the screening I saw Bad Bob brought down the house — Keach makes an electrifyingly crazy bad guy. He’s another nod to Milius’s mentor Francis Ford Coppola — remember the ‘albino hypnotherapist with a wooden leg’ in Coppola’s You’re a Big Boy Now? There’s your connection.

John Milius’ script is funny now and then — it has more than its share of zinger western humor. John Huston is a great director for semi-aimless shaggy stories but this one does drag on. The only character that grows on us is Ned Beatty’s bartender, who recites most of the voceover narration that glues together the disconnected episodes. Likable to a lesser degree is a pitiful deputy/gang member who gets two of his toes shot off, and from that point forward manages a funny walk. Maurice Jarre’s beautiful score frequently reminds us of sentimental passages from his other movies, especially the David Lean epics. It’s needed to provide the sweetness for relationships that otherwise are simply not there. Although Bean grieves for a lost love, he never expressed all that much interest in her, except getting excited to see her in a new dress bought by mail from Sears & Sawbuck. The gift of a music box is poignant in an old fashioned way, but the movie seems afraid to embrace its own maudlin details.

How do we know when a picture has outlived its welcome? The Life and Times of Judge Roy Bean dwindles down to a rather lukewarm finish, but then tacks on not one but two lengthy postscript scenes, false endings as it were. We jump ahead twenty years to meet Bean’s feisty daughter Rose (Jacqueline Bisset). Although it provides a big shoot ’em up scene, this second ending makes us feel like we’re starting a new movie. After a full reel of Bisset, oil wells and gunfire, the show still doesn’t know when to quit. A third ending gives us Milius’ version of a ‘print the legend’ coda, with Lily Langtree (Ava Gardner) paying a visit to her namesake whistle stop town long after Roy’s demise. Since Roy was just a different kind of greedy scum than the villain Gass (Roddy McDowall), eulogizing him as an American Original doesn’t do much for us.

Those three endings are what do the film in — it seems interminable. The trick is to remember the funny parts (words of wisdom). The Warner Archive Collection Blu-ray of The Life and Times of Judge Roy Bean is the expected pristine copy of this early ’70s item. It carries an original ‘First Artists’ logo, that uses prehistoric computer-generated images to manipulate a line drawing of the four filmmaker profiles (one is Barbra Streisand). The naturalistic lighting by Richard Moore doesn’t go in for too many pretty pictures, and interiors can be rather drab. The main title design by Willard B. Scott is quite handsome, though. When Bad Bob gets his just desserts, the film uses a cartoonish zoom-in optical that we thought was hilarious back in ’72.

Maurice Jarre’s music is a pleasure to hear, even if the main theme seems familiar from something else. Yes, that damn song was nominated for an Oscar. The winner was ‘The Morning After’ from The Poseidon Adventure. John Milius must have been enchanted by the casting, for Life and Times abounds with his future personnel: stunt director Terry Leonard, actors Steve Kanaly and Roy Jenson. Neil Summers is especially good in a bit as a braggart cowboy that foolishly takes a shot at a poster of Lily Langtree. Michael Sarrazin makes a photo-only appearance, and another artwork poster gives Milius the opportunity mention his favorite president, Teddy Roosevelt. Identical references and themes running through multiple feature films — equals — instant auteur!

In 1972 and ’73 I roomed in Westwood with fellow film student/future screenwriter Steve Sharon. We were western-crazy and saw everything. Overall the new westerns seen in Westwood didn’t impress us the way the older films did, but what could compete with the fantastic perfect prints of the John Ford classics, etc., being shown up in the film school? I walked out of the soporific Wild Rovers, suffered through The Man Who Loved Cat Dancing and Chisum, and simply avoided El Topo. John Milius’ Jeremiah Johnson was okay, Altman’s McCabe & Mrs. Miller wonderful, Robert Aldrich’s Ulzana’s Raid scary as hell. The Life and Times of Judge Roy Bean came across as a somewhat murky diversion, while we thought Peckinpah’s Pat Garrett and Billy the Kid (in its short form) a total mess. I guess we were film school snobs. I preferred to go see The Wild Bunch for the 20th time!