Easily the most mellow of the films of Sam Peckinpah, this relatively gentle western fable sees Jason Robards discovering water where it ain’t, and establishing his private little way station paradise, complete with lover Stella Stevens and eccentric preacher David Warner. Some of the slapstick is sticky but the sexist bawdy humor is too cute to offend . . . and Peckinpah-phobes will be surprised to learn that the movie is in part a musical. 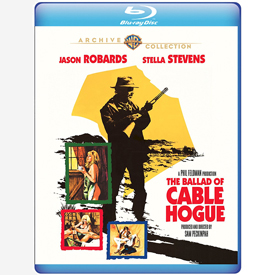 And now for something completely different. Fresh from the violent excess of The Wild Bunch, Sam Peckinpah spins his talents in a different direction. The actor-centric light comedy western The Ballad of Cable Hogue has a spell of gunplay here and there but takes its life-and-death issues in a more whimsical direction. Un unlikely hero establishes his own little fiefdom in the desert, raising himself from a no-account bum to a man of property. It’s the American Dream, and Cable is a dreamer grateful for his good fortune. Sam Peckinpah had to make his way in TV westerns, seeing The Rifleman taken away from him and softened, and his eccentric The Westerner series cancelled after just a few episodes. But with his career revived as ‘Bloody Sam’ he seemingly took a time-out from heavy-duty western action.

1970 was a year of distribution chaos, as seen at 20th Fox, which had almost nothing in production. Cable Hogue was yet another picture praised by critics and seen by almost nobody. Most of Hollywood was still unaware of Peckinpah’s Class-A status as an actor’s director in Noon Wine, an acclaimed TV drama. Actor Jason Robards’ sketches a gentleman-bum character far more sentimental than his wisecracking burlesque headliner in The Night They Raided Minsky’s. The only movie that comes to mind as being somewhat like Cable Hogue is William Wyler’s 1940 The Westerner, with its cynical/sentimental frontier relationships.

This time Peckinpah came back to the States to film, in locations in Arizona and Nevada. Penniless Arizona bum Cable Hogue (Jason Robards Jr.) is dry-gulched and left to die by false friends Bowen and Taggart (Strother Martin and L.Q. Jones). In a miraculous bit of luck he stumbles upon a water well located at an ideal midpoint between two stagecoach stops. Cable gets his paperwork in order and sets up a sharp little trimming station selling cheap meals and ‘watle’: Cable can’t spell. His only friend is the frontier con-man/preacher Joshua Douglas Sloan (David Warner), an amiable bounder who uses his Bible verse to seduce young women. Lonely in his settled life at Cable Springs, the new man of property cultivates the acquaintance of a spirited prostitute named Hildy (Stella Stevens), introducing her to the pleasures of his idyllic shack far from the evils of town life. But Cable remains set on exacting vengeance from those dastards Taggart and Bowen.

Cable Hogue is a stack of mellow ideas, that finds a mostly reasonable tone for its bawdy comedy. Jason Robards and Stella Stevens are excellent and Peckinpah is able to coax a pleasing warmth from their tawdry romance. Hogue is the kind of folksy good spirit, who when facing death in the desert, strikes up a personal ‘conversation with the Lord,’ to keep up his spirits. He first visits Hildy as a prostitute and then provides a home for her at Cable Springs. That natural relationship ends abruptly when the penny-pinching proprietor jokes that he’s bartering meals for her services. Hildy never acknowledges the slight, yet she knows that the time has come to move on. This is one of the few Peckinpah films with a positive male-female relationship at its center, but from The Wild Bunch forward he has a hard time conceiving of women as much more than prostitutes, she-cats or one-night lays. Even though Robards and Stevens sweeten the relationship, there’s a lot lacking in Peckinpah’s view of men and women together.

The film seeks its own pace and rhythm and succeeds whenever Peckinpah lets his characters dictate the flow of scenes. Robards interacts well with Warner’s amusingly shady preacher, the various town businessmen and stagecoach driver Slim Pickens. Rejecting the knee-jerk cynicism of the prevailing climate of Italian Westerns, Peckinpah imagines a lonely West where people are basically decent, even the angry banker played by Peckinpah stock heavy R.G. Armstrong. The Temperance Union types are made the butt of jokes, but the film’s forgiving tone doesn’t require them to be massacred, as in The Wild Bunch. 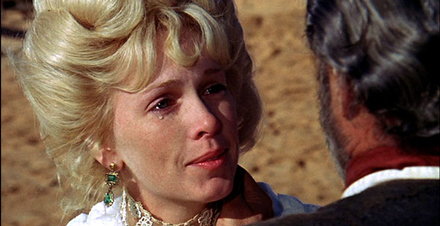 As if purposely getting his ‘bad man’ director image out of the way, Peckinpah offers an ugly image of a Gila Monster being blown apart in the first scene. Animal lovers may condemn the movie right there — the documentarians say the beaded lizard was already dead for the slow-mo shot, but we still wonder how exactly it was killed. Returning for more slimy villainy are Strother Martin and L.Q. Jones, the West’s favorite bounty-hunting scum from Peckinpah’s previous epic. Genre expectations are turned on their head when Hogue forgives the treacherous Bowen, inspiring him to effect a complete reformation. Hogue’s reconciliation with Hildy is begun with the gift of a flowered chamber pot, to replace the one she broke while trying to bash his head in.

At 121 minutes The Ballad of Cable Hogue eventually comes off as a bit too long, and affected with some dated stylistic touches. It opens with a split-screen title sequence, and returns at several junctures for musical interludes sung by Richard Gillis. The song “Butterfly Mornings” is hurt by repetition, perhaps once too often. Yet Peckinpah’s staging of a duet between Robards and Stevens is a fresh idea that upsets genre expectations. Working with his most felicitous cameraman is good, but Peckinpah also relaxes his visual direction. He abandons many of his formal touches for multi-camera coverage and for some scenes the camera ‘hoses down’ the action with zoom lenses. It’s not too often that the camera placement seems carefully chosen; spatial relationships are loose too. 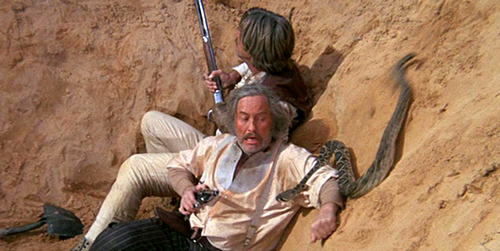 Peckinpah’s screenplay has no shortage of funny, authentic-sounding dialogue of that kind that lifts most of his Westerns into exceptional status. But some of his slapstick comedy ideas work better than others. Some jokes just fall flat, like the tent that collapses over the temperance meeting, or the sight of David Warner scuttling around in speeded-up motion. The humor leaps back to life whenever the focus returns to the characters, as with Bowen and Taggart’s frantic episode with a pit of rattlesnakes.

The peripheral characters really stand out now — I love the scene of Hogue pouring water on R.G. Armstrong’s boot, and another when Peter Whitney surprises us by showing faith in the man who claims to have found water. Although Peckinpah’s later films tend to be repulsive in their treatment of women, the light tone here makes a few sexist moments seem almost inspired, as in an extended angle where David Warner’s preacher massages a young woman’s breasts as a ‘comforting’ gesture. It may be unforgivably vulgar, but Warner is such a gentle molester . . . it’s too direct to be offensive, as is the ‘assault with a friendly weapon’ rape motif in the James Coburn film Waterhole #3.

Likewise, Stella Stevens’ bawdy moments seem sweet rather than unduly exploitative. Even the zooms towards Stella Stevens’ bosom seem innocent, as it is obviously what has Cable’s attention, and he’s trying to be as gentlemanly as he can. Peckinpah also shows concern for the occupational unpleasantries of a prostitute like Hildy. She scores points for civility when she waits ’til Cable’s back is turned before grimacing at his awful smell. I imagine that a frontier hooker like Hildy might ask $5 for the roll in the hay, but demand $15 for the bath.

Although most audiences couldn’t find The Ballad of Cable Hogue in 1970, the new generation of genre critics (many of them English) loved it. Film journals were eager to laud Hogue’s thematic consistency, regarding most everything that happens in the film as inspired restatements of auteurist themes. Thus a fateful automobile accident is associated with the unwelcome encroachment of progress and the End of the Frontier. Critics not enamored of the cult of Peckinpah just called him pretentious, which he sometimes was.

The Wild Bunch had already gained credence as a mature masterpiece, and the only criticism I’ve read to put a dent in its cinematic halo comes from the respected critic Raymond Durgnat, whose cautious judgment leveled a curious charge of mythomania. Bunch is still very much the statement of an angry author bursting to express his rage; while this gentle show is best regarded for its relatively benign attitude toward people — I mean, even the whiney, sycophantic Strother Martin is rehabilitated! True, the film’s bigger aspirations boil down to a dry catalog of Director’s Themes. Accepted for its amiable, endearing characters, Cable Hogue comes to rest far in plus territory.

The Warner Archive Collection’s handsome Blu-ray of The Ballad of Cable Hogue encouraged me to lighten my opinion of the picture. It was nowhere to be seen in 1970, even as I was just ‘discovering’ Sam Peckinpah as a college-age obsession. When revival prints showed up they tended to be washed out, with the zooms and dissolves and multi-panel effects dragging the picture down. Even the laserdisc and early DVD seemed lacking.

Seen in this pristine scan from prime elements, the show takes on a happier feeling again. Colors pop, grain is almost non-existent and even the optical embellishments look attractive. The improved sound track also makes Jerry Goldsmith’s score and the songs seem more mellow — or is just that I’m no longer as resistant to them than I once was? 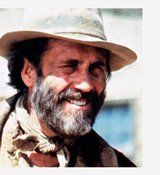 The show carries the older ‘Peckinpah posse’ commentary arranged by Nick Redman, with the biographers David Weddle, Garner Simmons and Paul Seydor. Some of them knew Peckinpah by this time, and they’re quick to put him on a personal basis. These are the acknowledged experts, but one does need to be prepared to hear Peckinpah regarded as an artistically unassailable god.

Also present is Nick Redman’s 2005 interview featurette The Ladiest Damn’d Lady: An Afternoon with Actress Stella Stevens, who uses the better part of a half hour to tell her Hollywood story starting with Li’l Abner. Ms. Stevens’ perspective demonstrates how actors saw Peckinpah completely differently than did producers and crews — the director looked out for his performers and they loved him for it.

A trailer rounds out the presentation.