Want a nine-hour dose of the truth of existence so harrowing that it will make you feel grateful no matter how humble your situation? Masaki Kobayshi’s epic of the real cost of war boggles the mind with its creeping revelations of cosmic bleakness. Yet all the way through you know you’re experiencing a truth far beyond slogans and sentiments. 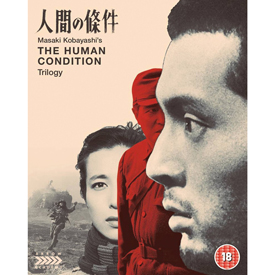 The first Blu-ray of perhaps the most important film of the war experience — for Japan either 1933 or 1937 through 1945 — comes from Arrow in England, in a Region B- only three disc set.

The Human Condition is a six-feature serial epic originally shown in three parts over three years. It’s a career highpoint for director Masaki Kobayashi (Kwaidan, Samurai Rebellion, Harakiri), who adapted the film from a popular 1950s anti-war novel by Jumpei Gomikawa. Known in the west only by aficionados of arcane Japanese cinema, the almost ten-hour Ningen no jôken is considered by many to be one of the best films ever made. It’s a gripping and frequently harrowing experience. Well known from roles in High and Low, The Face of Another and Kagemusha, acclaimed actor Tatsuya Nakadai is Kaji, a stubbornly hopeful idealist trying to find a moral stance amid a conflagration that will wipe out millions. It’s another of director Kobayashi’s portraits of righteous disobedience in an intolerant social system.

The director’s own war experience was similar to that of author Gomikawa’s deeply conflicted protagonist. Opposed to the war and harboring uninformed illusions about better conditions in Soviet Russia, Kaji languishes in Tokyo as a management trainee, waiting to be drafted. He resists the pleas of his girlfriend Michiko (Michiyo Aratama) to marry because he believes that army service is a certain death sentence. All seems saved when Kaji’s company, impressed by his progressive workforce theories, sends him to occupied Manchuria to oversee personnel at a mine. The lovers marry and soon arrive at the windswept outpost.

The mine is revealed to be a sinkhole of corruption and injustice that dashes Kaji’s dreams of helping his fellow men. The Chinese miners are involuntary laborers routinely abused and cheated; the Japanese overseers respond to Kaji’s reforms by conspiring against him. Kaji soon finds himself in charge of six hundred additional Chinese POWs under the jurisdiction of the sadistic Japanese Kempeitai, or military police. The prisoners are determined to escape; Kaji is expected to work them to death. This is War, he is lectured, and war justifies all cruelty.

Kaji attempts to establish good relations with his prisoners but the other mine personnel sabotage his efforts by allowing some POWs to escape. A vicious Kempeitai officer uses the escape as an opportunity to conduct a multiple beheading. Forced to witness the executions, Kaji can no longer hold himself separate from the moral sickness around him.

That’s only the opening of The Human Condition, which takes Kaji far deeper into the horrors of Japanese-occupied Manchuria. When he is conscripted as an ordinary soldier, one entire ninety-minute film is devoted to his experience in a brutal boot camp. At every step Kaji resists the barbaric practices of his fellow Japanese. Kaji’s humanist philosophy makes him a suspected Communist even as he’s praised as an excellent trainee.

Kaji’s natural reaction is to take personal responsibility for the injustice around him. This becomes an ongoing curse. When Kaji tries to protect green recruits from excessive punishment, the veteran soldiers beat him savagely. One fellow draftee named Obara (Kunie Tanaka) cannot keep up with the others and is harassed so badly that he threatens to kill himself. The officers cruelly blame Obara’s wife for writing letters to Obara complaining about his mother.

Kaji does find a few men that share his values. One college friend becomes an officer and abandons his liberal ideals. A fellow rebel in boot camp goes AWOL. Kaji meets Tange (Taketoshi Naito) in sickbay, where the head nurse is as vicious as the military police. Tange has a laid-back attitude toward everything and advises Kaji to keep his mind on survival.

At the halfway point of The Human Condition Kaji’s wife Michiko is still in Southern Manchuria. She visits him briefly before his unit marches out to oppose the better-equipped Russian onslaught. Kaji swears that he will return to her when the fighting is over, but the real chaos is only beginning.

The Japanese command is in serious denial about the impending defeat. The soldiers are unaware of the bombing of Hiroshima when they are rushed out to face the invading Russian tanks. Kaji is alarmingly naïve about the Russian communists, who he thinks are more civilized than his own countrymen. He also doesn’t realize to what extent the Chinese will take revenge on the occupying Japanese army, whose officer corps has been committing mass atrocities for years.

The balance of the epic sees Kaji picking up various companions as he makes his way South, trying to avoid capture and starvation. He eventually finds himself a prisoner in a Soviet forced-labor death camp, suffering the same injustice he tried to alleviate in the Japanese-run mine. The Human Condition transcends other anti-war films by not turning Kaji into a generic victim. Even in utter defeat, he refuses to abandon his struggle for a better world.

Director Kobayashi reportedly worked “with the script in one hand and the original book in the other,” reminding us of the method used by Erich Von Stroheim back in 1925 to film the lost ten-hour Greed. The movie abounds with unforgettable scenes. A guard throws a dog into an electric fence to show the captive Chinese miners what will happen to those attempting escape. Kaji’s one night with Michiko is spent in a miserable storeroom. When the Russian tanks attack, Kaji saves the life of the arrogant young Terada (Yusuke Kawazu) and gains an instant disciple. Lost in a vast Manchurian forest with a small group of Japanese civilians, Kaji must watch as they kill each other and die of starvation one by one. A frightened Japanese farmer (Chishu Ryu) begs Kaji’s deserters for protection, while terrified women offer sexual favors in the hope that they’ll stay. At one point Kaji’s band meets a group of die-hard Japanese holdouts intent on a suicide attack on the Russians. Kaji finally takes a stand, directing his renegades to raise their rifles at their own countrymen.

With the exception of a few brief flashbacks The Human Condition plays as a straight linear narrative. Each third of the epic, sometimes billed as a trilogy with the titles No Greater Love, The Road to Eternity and A Soldier’s Prayer leaves us anxious to know what happens next. The shooting style emphasizes characters and moral problems over style. For a movie that takes place mostly in bleak outposts and a barren wilderness, the images are consistently attractive. Yoshio Myajima’s cinematography makes dramatic use of under-lit, wind-blown smoke. The beautiful forest becomes an ironic backdrop when the starving refugees begin to lose all hope.

Although its main target is nationalist militarism The Human Condition also reveals that Kaji’s faith in Russian and Chinese communism is seriously misplaced. The Russians excuse the forced starvation in their labor-death camps by saying that the Revolution isn’t perfect and that patience is required while little problems are worked out. Kaji never sees the end of war; every new situation is another theater of mass extermination.

Kobayashi’s anti-war saga is a deeply affecting emotional experience. That such an uncompromised and un-commercial account of human misery could be produced in this epic form is remarkable in itself; American cinema has nothing to compare. Only about thirtty minutes of The Human Condition’s nine-plus hours of suspense and heartbreak are devoted to standard combat action. The frightening thing is that the epic was produced only fifteen years after the cessation of hostilities. By 1960 the incalculable suffering of WW2 was fading fast from the collective memory. The map of Asia had already been re-drawn with a new set of political antagonisms and conflicts.

Arrow Academy’s Region B Blu-ray of The Human Condition places each of the 2-film chapters on a separate disc. In the higher resolution and wider contrast range of HD, the gray-on-gray Shochiku ‘Grandscope’ images stand out more sharply; we’re impressed by the number of exteriors that utilize broad ‘magic hour’ horizons. Whether in a lush forest or bleak, empty plain, Kaji struggles under skies that seem to say that God is very far away.

The films are all mono on Arrow’s disc presentation. Darren Gross informed me that part 3 (chapters 5 and 6) were the first Japanese multi-channel stereo films, 4-track mag stereo in this case. The trailer for the last chapter announces the stereo track.

Criterion’s DVD set of 2009 still has the edge on extras but Arrow has some good input from critic Philip Kemp. A compact introductory video covers Masaki Kobayashi’s career, which was always controversial. In addition to the titles noted up top, I’ve also reviewed Kobayashi’s Kwaidan and a Masaki Kobayashi Against the System collection that includes four of his politically fierce earlier pictures. For each of the film’s six parts Philip Kemp also contributes a selected scene commentary, pointing up specific elements he wants to analyze. Through him we learn the identity of two actresses well known from other prominent Japanese films. The Japanese refugee accompanying Kaji’s renegade stragglers southward across Manchuria is Kyoko Kishida, the excellent actress of Woman in the Dunes and Manji. A similarly distressed woman who tries to indebt Kanji by sleeping with him is played by Hideko Takamine, the elegant actress of many classics, including When a Woman Ascends the Stairs.

All three theatrical trailers are included, and Arrow’s insert booklet (not provided for review) carries a text interview with director Masaki Kobayashi, and a scholarly essay discussing post-war Japanese culture.

I watched The Human Condition in two five-hour bursts over two days. Every episode shows Kaji pushing forward, determined to rescue himself, find his wife and restore meaning to his existence. His fate is haunting — anonymous, lost to the elements, and haunting. “I can’t believe it ended like that,” I said to my patient spouse. Her flatly logical response was, “With the title  The Human Condition you expected something different?”