Japanese art filmmaking writ large by director Hiroshi Teshigahara: a strange allegorical fantasy about a man imprisoned in a sand pit, and compelled to make a primitive living with the woman who lives there. Perhaps it’s about marriage… 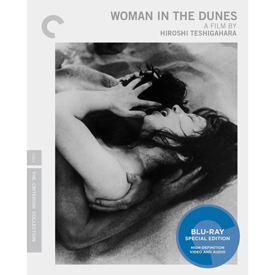 In the 1960s the public interest in art cinema reached out beyond France and Italy, finally giving an opening for more exotic fare from Japan. Director Hiroshi Teshigahara earned his moment in the spotlight with 1964’s Woman in the Dunes, an adaptation of a book by Kobo Abe. The enigmatic picture gained a reputation as a vivid tactile experience. Teshigahara’s composer Toru Takemitsu would soon be the focus of cult attention as well.

Woman in the Dunes is everything a ‘sixties art film needs to be — inventive, original, and mysterious. Considered Teshigahara’s masterpiece, it is his only film to be well received by American art movie audiences. It had everything for the 1964 espresso crowd: beautiful B&W photography, a gripping story and a little sex thrown in for good measure. It was nominated for Best Foreign Film in 1965; a year later Teshigahara received an even more impressive Best Director nomination. The appeal of the disarmingly simple storyline was expressed in the buzzwords of the day: ‘meaningful allegory’; ‘rumination on the meaning of life.’

The story wastes no time setting up its strange predicament. A Tokyo schoolteacher on a weekend insect-catching holiday (Eiji Okada of Hiroshima, mon amour) lingers too long in a sandy area near the sea. Some helpful locals suggest he stay overnight, and help him descend a rope ladder to the shack of a gracious woman (Kyoko Kishida of the controversial Manji). The next morning, the teacher discovers that he is a virtual prisoner in a furtive community of isolated sand-dwellers. Climbing out of the pit is impossible. He and the woman must labor all night to collect sand, which is hauled out on buckets dropped on ropes from above. The teacher at first rebels and refuses to help. An escape attempt fails and the days and weeks drag on. Over time he falls into a relationship with the woman. As he becomes accustomed to his new life, the teacher begins to accept responsibility for fighting back the sand. 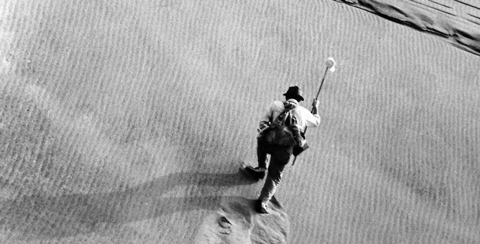 Our sensible hero finds himself in a situation identical to that of insects that fall into the pit-traps of the desert ant lions. Are we humans really meant to maintain total control over our lives? Woman in the Dunes invents a semi-plausible alternate lifestyle. Our hero has only two choices: work to keep the sand from overrunning the shack, or perish. He and the lonely woman (she lost her husband and child the year before) concern themselves with immediate issues that cannot be ignored. Their entire world is limited to a shack on just a few square yards of pit, with sand that seeps through the roof and gets into everything. The woman demonstrates that the sand is unaccountably moist. It rots everything. She sleeps in the nude to keep from chafing. They awaken each morning covered with a fine dusting of powder. The pair must follow strange procedures to keep the sand out of their hair and out of the food that is dropped to them every week or so; all larger concerns are eclipsed by this constant struggle. In other words, the ‘civilized’ teacher finds himself in a survival paradox similar to that suffered by a majority of the world’s inhabitants. By no choice of his own, he must eke out his existence as a primitive. It doesn’t matter that the situation is rigged against him, that others could help him if they so chose. All that exists is Here and Now. Kobo Abe’s award-winning novel, from 1962, seems to have definitely been an allegory — its sand pit prisoner comes to the conclusion that he has no more actual freedom back in society, than he does slaving in the pit.

The film is perhaps a more abstract look at the situation in Kaneto Shindo’s The Naked Island of a few years earlier. It’s a less earthy examination of The Human Condition. The basically illogical fantasy isn’t all that more absurd than the lifestyles of laborers in the real world. Also similar is a stunning visual documentary from the Milestone Cinematheque called Araya. It shows how people subsist in a Venezuelan hellhole, mining salt from vast sun-scorched marshes.

Woman in the Dunes delights lovers of still photography and nature studies. Teshigahara described the sand as the film’s third main character. It behaves like a living thing. The sand always seems to be on the move, whether wind-blown or following the dictates of gravity. Dunes are formed into crumbling cliffs or lined with perfectly formed ripples. American viewers in particular weren’t accustomed to the ‘background’ of a film intruding this strongly on the foreground, and surely decided that the stress on immense natural forces was a Japanese quality. Is this what it’s like, living closer to the elements? The man and woman in this movie don’t worry about a mortgage, but they also have no sanitation facilities.

Instead of finding resignation and defeat, the teacher eventually embraces his new ‘wife’ and his new life. He finds that he can use the concept of capillary action to collect pure water from the bottom of the sand pit. He’s eager to share the discovery with his peers, who grant the approval that the ‘big world’ once denied him. Late night filmgoer discussions about Woman in the Dunes were divided between philosophical interpretations. Did the teacher open up to a new inner freedom afforded by his uncomplicated new life, or did he simply knuckle under to an imposed regime, as in a totalitarian society?

On the other hand, Woman in the Dunes is one of those art pictures about which we were told, don’t discuss it, don’t analyze it, just experience it. It may remind some of gallery photo art, turned into a motion picture. For others it’s a conduit to meditations on the meaning of life. That was the definition of art film back in the day.

The Criterion Collection’s Blu-ray of Woman in the Dunes is a dazzling encoding of Teshigahara’s gift to fans of B&W images. The high-quality visuals are almost hypnotic… and affecting. When you’re done you’ll want to shower off the perceived coating of fine sand. The previous DVD was good but this HD presentation seems like a new experience — the additional contrast range brings out more in Hiroshi Segawa’s precise images.

The extras are taken from the company’s earlier DVD set Three Films by Hiroshi Teshigahara. A lengthy video essay is by critic James Quandt, whose analytical narration is backed by appropriate images from the film, stills from other movies, word definitions, etc.. About ten years ago Criterion began producing these expert featurettes, as an alternative for feature length commentaries. Depending on the movie, the informative content can be presented more efficiently this way, and clips can be used to illustrate a critics’ thesis. Not every movie is Citizen Kane with two hours of essential comment to impart.

The documentary Teshigahara and Abe examines the collaboration of the writer and director, with input from Richard Peña, Donald Richie and Tadao Sato, and testimony from designer Arata Isozaki, writer John Nathan and producer Noriko Nomura. Also included are four of Hiroshi Teshigahara’s excellent short films. 1956’s Hokusai covers the life and work of an 18th century woodcut artist and painter. 1958’s Ikebana is a beautifully directed color movie about art and creativity that shows Hiroshi’s father, a famous artist and flower arranger, at work in the academy that he founded. One impressive scene shows him evaluating his students’ work. Tokyo 1958 is a rougher documentary about trends in the rebounding Japanese capitol. 1965’s Ako is a compelling look at a Japanese teenager’s date night with two other couples; it uses telling voiceover bites to express teen attitudes and viewpoints.

The insert contains an essay by Audie Bock and a Max Tessler interview with director Teshigahara. The director’s next film is a sort of Japanese answer to Eyes Without a Face, called Tanin no kao (Face of Another). An identity switch leads not to horror movie clichés, but to cruel games, morbid fantasies, and another strange movie score by Toru Takemitsu.