What makes a Ghost Story scary? This classic was almost too artistic for the Japanese. Masaki Kobayashi’s four stories of terror work their spells through intensely beautiful images — weirdly painted skies, strange mists — and a Toru Takemitsu audio track that incorporates strange sounds as spooky musical punctuation. Viewers never forget the Woman of the Snow, or the faithful Hoichi the Earless. Finally restored to its full three-hour length. 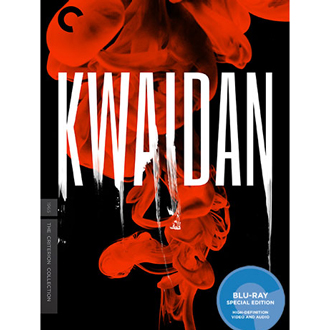 There has never been a shortage of artistic Japanese film directors, but we especially favor the extremists. While America was bumbling through the complacent 1950s, some Japanese directors were already critiquing the commercial consumerism borne of the occupation, in scathing movies like Giants and Toys. America and Britain continued to produce self-congratulatory “How I Won The War” movies, but Japanese filmmakers didn’t have that luxury. Director Masaki Kobayashi made a withering condemnation of the way low-level war criminals were treated; it was suppressed for three years. He then made what is surely the best anti-war film ever made, the 9.5-hour The Human Condition. Kobayashi served in the war but was fortunate to be assigned to locales away from the worst fighting. The hero of his epic tries to take a humanistic approach to his war service, which leads to one of the bleakest conclusions of any film. In his samurai films Harakiri and Samurai Rebellion, Kobayashi typically stresses the moral bankruptcy of the Code of Bushido. Even in period dress, that’s tantamount to condemning the whole system of military honor. Did film artists have more freedom in Japan? In America the FBI and the witch hunters came down hard on a tiny movie about a labor strike; imagine what the reaction would have been to a movie telling us to Forget The Alamo?

At the height of his popularity Kobayashi made the reportedly very expensive Kwaidan, an epic-length adaption of horror stories popularized by one Lafcadio Hearn, a Gaijin who transcribed Japanese folk tales and other stories. The Japanese cinema has a rich tradition of horror tales, often in period dress like our Gothic horrors, and based on popular themes, like Demon Cat tales. Vengeance from beyond the grave is the basic plan, with plenty of grisly variations. As with our own haunted house stories, the horror often derives from domestic issues. In the 1960s there were traditional horrors like Kuroneko, as well as more transgressive shockers like the gory Jigoku and the grotesque Moju. The eerie Onibaba focuses on two murderous women that are haunted by a very scary mask.

Kwaidan takes the Japanese horror film to an aesthetic extreme, with four stories that return to narrative basics. They’re all prime ‘campfire tales’ that one might think would be better spoken than made into films. Kobayashi concentrates on moods mostly abandoned in international horror pictures: slow dread, an unrelenting sense of the uncanny. His designers give the episodes fascinating visual treatments, totally artificial and stylized. The blend of storybook graphics and theatrical formality transports the receptive viewer into an utterly new realm of fantasy.

The four stories are simplicity defined. In The Black Hair a poor swordsman (Rentaro Mikuni) abandons his faithful wife (Michiyo Aratama) to make an advantageous second marriage. When he sours of that arrangement, he walks out on wife number two as well. He’s eventually drawn back to his first house, where he’s surprised to find his first wife still happily awaiting him. He tries to confess and atone, but she assures him that no harm has been done. When he wakes up the next morning, he has quite a surprise coming. The Woman of the Snow is a Japanese folk demon called the Yuki-onna. Invading the hut of woodcutter Minochki (Tatsuya Nakadai of The Human Condition) she kills his father with her frozen breath. But she spares Minochki on the promise that he’ll never speak a word about her appearance. Ten years later, Minochki has a wife (Keiko Kichi) and child, and couldn’t be happier…. or so he thinks. Hoichi the Earless is a spooky saga about a blind monk, Hoichi (Katsuo Nakamura), who plays the Biwa beautifully. He’s asked to play before an audience of nobles, not realizing that they’re the ghosts of the long-extinct Heike Clan, who want to hear the story of their demise in a famous sea battle. The supervising monk (Takashi Shimura) realizes that Hoichi is possessed by ghosts, and formulates a plan to protect him. Finally, In a Cup of Tea is an almost fragmentary tale about a writer who claims to see faces in his tea.

I can’t see Kwaidan going over well with the American audience in 1965. To those not receptive to its pace and eccentricities, it would surely seem interminable. Toho chopped it by twenty minutes to qualify for a screening at Cannes, and the American distributor dropped an entire story (Woman of the Snow). Older sources say that it was released as a stand-alone feature. In the extras we learn that this disc is our first opportunity to see the film at its full original length; it was pieced together just a few years ago.

Kwaidan couldn’t be more different than English-language omnibus horror offerings, like the fast-paced audience pleaser Dead of Night. Kobayashi uses stasis, the feeling of death, as an organizing element. The famous music score by Toru Takemitsu consists of strange, difficult-to-identify sounds, only some of which were made by musical instruments. They often sound like noises one might hear coming from the walls — an odd, loud scratch at the wrong moment. The jarring audio track hits us with unexpected half-musical ‘stings,’ some of which jangle the nerves like fingernails on a chalkboard. The audio is monaural, yet we feel as if the sounds on the screen are piercing us. I’m betting that this show influenced Roman Polanski when it came time to invent a soundtrack for his disturbing Repulsion.

Pictorially speaking the movie is captivating (especially in this new transfer, see below). We know we’re looking at interior sets, with fake snow and cycloramas behind the trees. The forests are beautiful and the houses charming. Instead of looking stage-bound, the slightly artificial sets lend everything a heightened presence. ‘Haunted’ transitions are signaled by radical lighting changes, a couple of which chill the blood. The movie has its share of bizarre visuals. A terrified man struggles but can’t get free of a woman’s hair. A loving wife pauses at the wrong time, and we dread what she will do next as she slowly turns to the camera. People stare into little earthen cups, and see strange faces smiling back at them.

The most dreamlike, haunting effect are the bizarre skies used in some of the tales. On his soundstage, actually an airplane hangar, huge painted cycloramas surround enormous sets with expressionist skies that could only come out of ancient non-representational art. They’re often bright yellow or orange, but when things grow spooky the painted clouds take the shape of giant eyes, looking down. They might remind fantasy fans of the collage of lustful eyes in Fritz Lang’s Metropolis. In this case figures from another dimension — ancestors, or gods — appear to be watching the human affairs playing out in the foreground. Or perhaps these all-seeing eyes are a representation of the guilt of the main players. 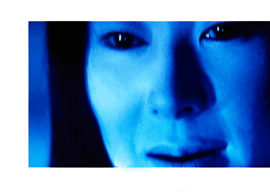 The main stories vary in tone, but all revolve around ghostly issues of unhappiness and betrayal. The Woman of the Snow is really perplexing. (spoiler) A demon is attracted to a man. When she spares him she seems to betray her own code of conduct. She then appears in human form, lives a life with him in apparent harmony. She has betrayed him with her disguise, yet she blames him for being human and forgetting his promise, which was forced on him in the first place. The penalty for this classic case of You Didn’t Keep Your Part of My Bargain is terribly cruel and unfair. Kobayashi really believes in the bleakness of ‘The Human Condition.’

Hoichi The Earless is the spectacular episode. Hoichi sings of the historical tragedy of the Heike clan, and we’re treated to an impressive replay of a sea battle. It’s stylized to resemble period paintings of large events — Kobayashi even uses such a painting as a transitional device, just as Val Lewton used paintings by Hogarth in his horror film Bedlam. Hoichi sings and the entire Heike clan listens, arrayed as a formal audience – a setup then revealed as a pattern of headstones in a ghostly graveyard. The movie’s iconic image is the sight of Hoichi’s face and body covered with hundreds of painted ideograms to protect him from the sword of the vengeful Heike emissary (Tetsuro Tanba).

Kwaidan has one scene of bloodletting, and the sea battle has some gruesome, if stylized deaths. I flinch when an arrow hits one warrior in the face, and he then appears to fall directly on the arrow. There’s also a moldy corpse-lover that gives us a jolt much different than the necrophiliac horror of Mario Bava’s Lisa and the Devil.  Some comedy relief appears here and there but a feeling of spooky insecurity permeates the whole show. I respond the strongest to the Yuki-onna episode, where Tetsuya Nakadai and Keiko Kishi (of the Robert Mitchum movie The Yakuza) play out their horror-marriage in a deceptively happy domestic setting. People that see Kwaidan never forget its strange images and sounds. One does feel transported to a different place.

The Criterion Collection’s Blu-ray of Kwaidan is the long awaited improved release to replace a weak transfer released at least fifteen years ago. With a full twenty additional minutes one would think the changes would be easy to spot, but all I noticed for certain were extra chapters in the Hoichi story. In this movie we find ourselves focusing on the creepy details, like the way a carpet of fog curls up into the frame, when disturbed by spectral activity.

It’s a LONG movie. That usually doesn’t bother me but I have to confess that it works better taken in halves. The good news is that the color and detail are so good, that watching the movie is like taking a trip through a fine art museum — a very occult art museum.

The DVD from 2000 had no extras. Criterion producer Curtis Tsui has covered a number of the label’s fantasy films, and this is one of his best efforts. Critic Stephen Prince provides an in-depth commentary. I followed all his arguments well enough, but resisted the one saying that one of the stories expresses the relationship between the Japanese people and their Emperor. That said, Prince’s capsule interpretation of 20th Century Japanese history is must-not miss.

We’re also given some excellent interviews. Masaki Kobayashi talks to director Masahiro Shinoda (Double Suicide), while assistant director Kiyoshi Ogasawara tells us about the filming and Kobayashi’s work habits. He also explains the film’s numerous cut-down versions, and the efforts made to reconstruct it in the last few years. Kobayashi lived to see one major reconstruction, but not this full original version.

A third major video item presents an illustrated history of Lafcadio Hearn, the author-adaptor of these works. The author feels that, for an American playing around with another culture’s folk tales, Hearn did a respectable job.

Also included are three trailers, one of which is a B&W ‘now in production’ teaser for the expensive show. The liner notes were written by Geoffrey O’Brien.