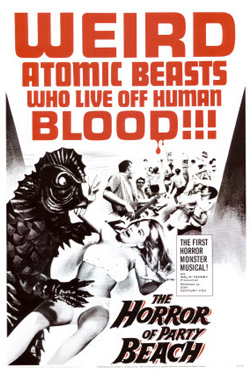 The Horror of Party Beach

This mini-budget Connecticut-shot indie originally featured garbage-like monster designs that recalled the Mad Magazine character The Heap (pictured here) but somewhere along the way these pollution-created monsters were reimagined to look more like the rubbery “bears” familiar from The Outer Limits tv series. Some theaters encouraged customers to sign a “Fright Release” before they could see the picture. In any case it’s a pretty terrible movie.