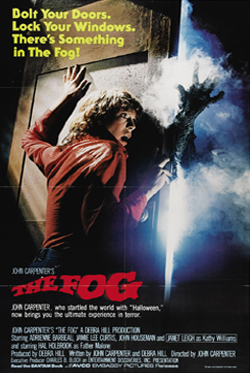 The Fog announces itself as an old-fashioned spook-show in its first scene: kids huddle around a campfire as John Houseman spins a morbid tale about a band of shipwrecked sailors murdered 100 years ago this very night. Those sailors vowed to return and that’s just what they do, using the fog that blankets this little seaside town as their method of transportation. Starring Adrienne Barbeau, Jamie Lee Curtis and Janet Leigh, the film was a solid success bringing in nearly 22 million on its 1 million dollar budget. The Fog was remade in 2005, directed by Rupert Wainwright and starring Selma Blair.