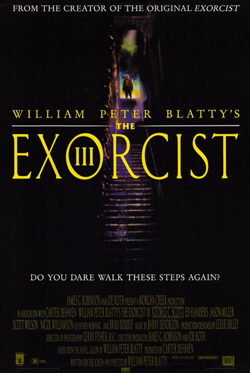 William Peter Blatty, author and screenwriter of The Exorcist, takes the director’s chair in this second sequel to William Friedkin’s 1973 smash. This time Blatty ties a serial killer (most likely based on the Zodiac murders) to the supernatural goings-on. The resulting film, originally titled Legion, suffered a name change along with a host of other studio-dictated cuts and re-shoots in attempts to ensure its popularity at the box office. It didn’t work… even boasting the star power of George C. Scott, the film opened to poor reviews and box-office returns.