We may not have film of the legendary actresses Lily Langtree or Sara Bernhardt to enjoy, but now we can see the famed Anna Pavlova dance and act, in an epic-length revolutionary saga inspired by a Grand Opera. In conjunction with the BFI and the New York Public Library, The Milestone Cinematheque gives us the full 2015 restored feature. A second disc offers more vintage film clips of the world’s first ballerina with an international touring company. 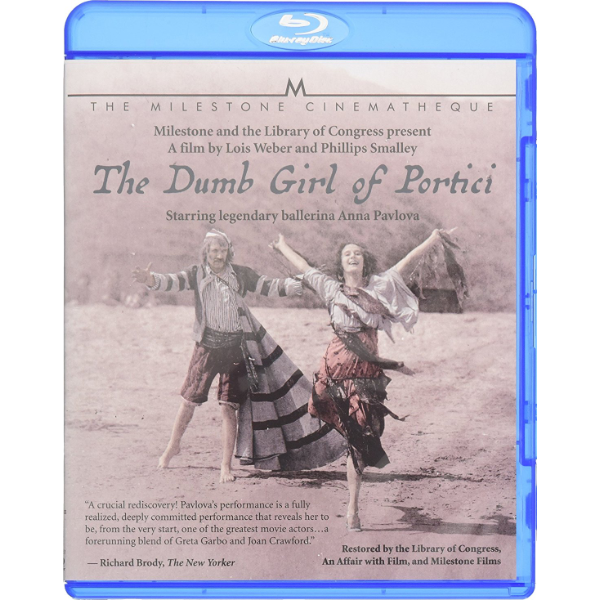 The Milestone Cinematheque follows up its deluxe disc of Lois Weber’s 1916 feature Shoes with another Universal picture from the director, The Dumb Girl of Portici. It’s an anomaly in Weber’s career in more ways than one. Weber was by far the most famous of several female directors on the Uni payroll, but she specialized in small films about people dealing with social issues — poverty, birth control, etc. This is a massive epic, Universal’s biggest production to date. Lois Weber was assigned to this important project because she was the best the studio had. The Dumb Girl of Portici began as an opportunity to put the world-famous ballerina Anna Pavlova (Pavlowa) on film. Apparently the only reason the Russian diva agreed to the arrangement was that her touring company found itself short of funds. Pavlova wasn’t keen on motion pictures, but reportedly signed for a 50% share of the profits. Some of the shooting took place in Chicago, around her stage tour. The bulk of the picture was filmed on the studio’s new California property, Universal City. Scenes in a fishing village look like a familiar stretch of Malibu Beach.

Taken from an 1828 opera, the movie is a two-hour spectacular with giant sets and hundreds of costumed extras. Italy (Naples?) is occupied by Spaniards, who impose an oppressive taxation on the simple, virtuous Italian locals. The mute Fenella (Anna Pavlova) is a sweet soul in love with her life. Her brother Masaniello (Rupert Julian, the future director of The Phantom of the Opera) struggles under the Spaniards’ rule. The Spanish nobleman Alphonso (Douglas Gerrard) sees Fenella when he goes into town incognito, to see what the locals are upset about. Although he’s to be married in just a day or so, Alphonso is smitten by Fenella. He gives her a scarf that was a gift from his fianceé and Fenella comes out at night to meet him. When their overnight romance becomes a scandal at court, the Viceroy has Fenella arrested in a bid to keep it quiet. It’s the wrong move: Masaniello’s response is to spur the citizens to revolt.

With her bright and expressive face Anna Pavlova would seem like a natural for movie acting, had she any interest in becoming a star. Lois Weber is said to have simplified the opera’s storyline, yet it is still overly complicated and event-heavy with misunderstandings, royal perfidy, vows of revenge, rescues, escapes, and tragic deaths. Ms. Pavlova dances semi-abstract bookends for the picture,. During the show itself is seen formally dancing only once or twice, but her general movements and performing are also stylized as if for a ballet stage. Whether being made love to, chased, or tortured in the Viceroy’s dungeon, she’s at all times graceful, playing the good-hearted, long-suffering mute girl. When in a dungeon surrounded by rats, Fenella happily feeds a rat some bread! Strangely, the movie all but ignores Fenella’s lack of a voice. We only remember her affliction when the Viceroy orders her flogged for not speaking. The drama is played at a high pitch, with grand gestures. The Spanish ladies are repulsed by Fenella, but when Alphonse’s fianceés life is on the line, one Dama is quick to remind our heroine that she once did her a good deed. Rather than concentrating at all times on her star, director Weber takes a wide view of the drama. One would think that Universal might have done better with a smaller story, with Pavlova under a bigger spotlight.

Fenella’s trials and tribulations are balanced with a full-scale revolution. Pavlova had left Imperial Russia for England in 1912, and had been touring the world for years — she was already famous and beloved in Mexico and South America. Russia’s own revolution was still a year in the future. The original 1928 opera already had a real-life effect on politics, though — its debut was said to have spurred a Revolution in Belgium.

The film shows the Italian rabble rising against their Spanish overlords in an orgy of violence. One shocking scene depicts a sadistic guard murdering an Italian woman’s baby by throwing it against a wall. Another gives us the realistic sight of a score of bloody Spanish heads on pikes, after a battle in the marketplace. The inter-titles bemoan the abuses of the occupiers, and then shift in tone to criticize the excesses of the rebels. Special note is made of ‘thieves and murderers’ joining the revolt after the first victory, to raid and sack the Spanish villas. In an action melee, a Spanish noblewoman is shot in the back by a ‘savage’ rebel. With so many men in big hats and similar facial hair, we have to pay close attention to tell them apart.

Although several of the actors had careers lasting into the sound era, we recognize few of them. A second-banana Spanish nobleman turns out to be none other than future cowboy and he-man star Jack Holt. He’s easy to spot — you can’t miss the line of his nose. Although much of the film is staged in standard static fashion, Lois Weber embellishes many scenes with exciting camera movement. She follows Pavlova through sets and pushes in and out on large tableaux. Weber’s camera rakes across rows of windows as the rebels smash them in one by one, and retreats from rooms as they fill with combatants, or with peasants grabbing at food from a wrecked banquet hall. But The director is also sensitive to other parts of the story. Interestingly, Fenella is not a victim of rape. She may be seduced but she’s certainly willing — a pretty raw detail for 1916 — and stays sympathetic to Alphonso even after she learns about his fianceé, the rightful owner of the telltale scarf. On the other hand, the ‘heroic’ Masaniello turns out to be quite a disappointment. He’s willing to sacrifice Fenella during the revolt. After taking power, he promptly goes insane. At the finale it looks like the Spaniards are going to recover everything that they lost.

Of special note are be two large-scale dance scenes at the Viceroy’s court. The dancers appear to be doing authentic Spanish dance moves. Anna Pavlova was noted for promoting and adapting Mexican dances for her tours; was any of this her doing?

The Milestone Cinematheque’s 2-disc Blu-ray of The Dumb Girl of Portici is an impressive archival rescue, taken from a 35mm print held by the BFI and a 16mm copy from the New York Public Library. The actual restoration took place in 2015. The Milestone Cinematheque forwarded this description of the participants: “George Willeman and Valerie Cervantes of the Library of Congress did the first restoration putting it together (with material from them, the BFI and NYPL). Then Lori Raksin of An Affair with Film, Jere Gulden of the Packard Humanities Institute did the cleanup and tinting respectively. We produced that part along with the score by John Sweeney.”

We’re happy that the show can be seen again, but with these 21st-century re-premieres, we also feel sorry for several generations of dance fans that passed on too soon to enjoy them. The proper attitude is surely, better late than never.

The picture is in pretty good shape. It looks as if the 16mm print has been used to fill in scenes missing from the better-looking 35. The speed looks natural and the image appears to be properly centered in the frame. Although not always sharp, the show is very stable and scratches are few except on the main titles. The attractive music score by John Sweeney, played by a small chamber group, is taken from the original Auber opera. Milestone includes an entire second Blu-ray with extras. The first is a 48-minute feature, The Immortal Swan from 1935. Commissioned by Pavlova’s manager and widower, it chronicles the dancer’s life through film clips, and photos. Some new choreography is added with segments showing ballet dancers ‘honoring’ a portrait of Pavlova.

Another segment is a collection of brief dancing bits and poses, done while visiting Douglas Fairbanks at his studio in 1924. Desperate for respectability, Hollywood was crazy about visits from European stars of the high arts; although the bits are one-shot items, they’re given careful lighting.

The second disc finishes with some of Pavlova’s home movies on 9.5mm film. They’re fairly indistinct. Much sharper are a couple of minutes of brief silent newsreels, which mostly consist of single shots of Pavlova posing in her garden, etc. She looks pretty brave, pulling a swan’s head under her chin. Those snake-necked birds are dangerous up close.